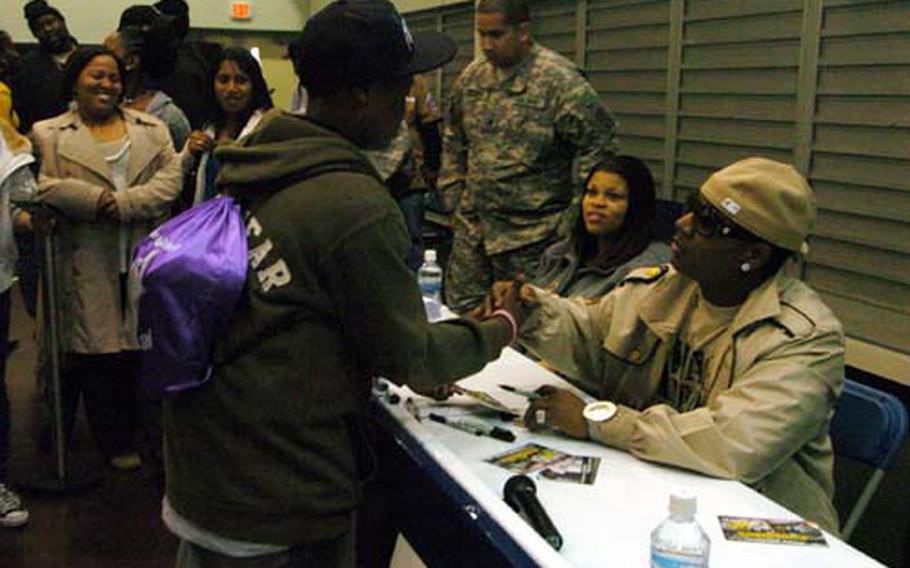 Thirteen-year-old Keanan Little shakes hands with Yung Joc during the famous rapper&#39;s visit to the Camp Zama, Japan, Youth Center on Thursday. &#39;Joc&#39; will be performing and meeting fans at Far East military bases throughout the month. (Tim Wightmanl / S&S)

The line of young Yung Joc fans packed the Camp Zama Youth Center gym Thursday, hours before the famous rapper was scheduled to take the stage.

That they were too young to attend the free night performance hardly bothered the youths as, one by one, they stepped up to the counter to meet and snap photos with one of their idols.

"I had to change my entire schedule around for this," 17-year-old Jasmine Johnson said, minutes after posing for a photo with the performer. "I listen to him all the time. I love Yung Joc."

Seventeen-year-old Austin Wilson said he enjoys listening to Yung Joc&#8217;s songs, which he said are played frequently at youth dances on base.

"We don&#8217;t live in the States, and this kind of thing is so rare," Wilson said of base visits by celebrities. "We get a few that sort of roll around but usually they go to Yokota, not here."

"People say during interviews, &#8216;What do you have to say to the kids?&#8217; and a lot of times you can&#8217;t say it in three minutes," he said. "Sometimes it just takes a hands-on experience where a kid actually gets to hear you say something worth their while that&#8217;s going to mean something and make a difference."

He said being able to perform for military people overseas benefits him as much as it does the servicemembers.

Yung Joc was scheduled to perform at Yokosuka Naval Base on Friday, Naval Air Facility Atsugi on Saturday and Sasebo Naval Base on Monday before visiting bases on Okinawa and South Korea later this month.