Spc. McAnthony Foster, 26, put eight years into the Army and is now looking to get out early and to go on a yearlong European tour with his rap partner Dennis McQueen, left. (Geoff Ziezulewicz / S&S)

Spc. McAnthony Foster, 26, put eight years into the Army and is now looking to get out early and to go on a yearlong European tour with his rap partner Dennis McQueen, left. (Geoff Ziezulewicz / S&S) 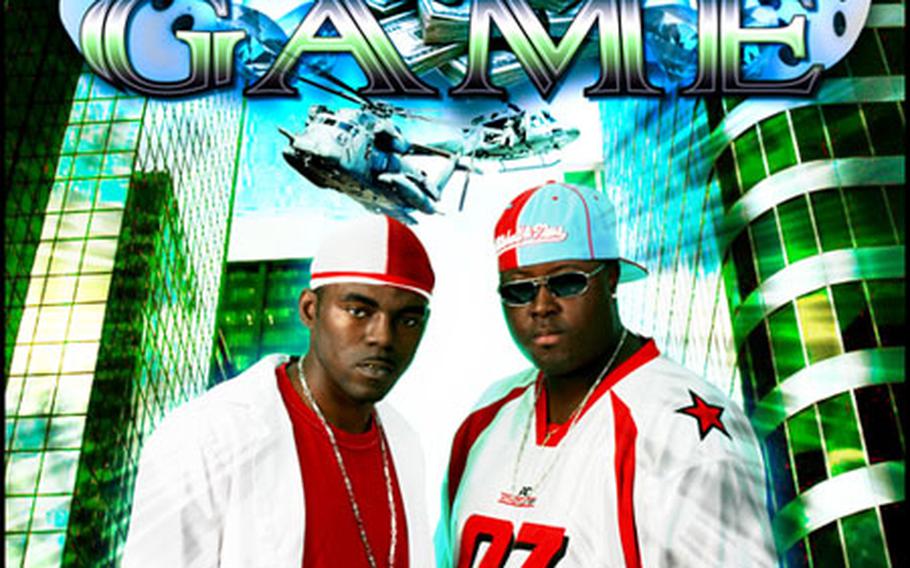 Spc. McAnthony Foster, left on this poster promoting the rap group Major Game, and his partner, Dennis McQueen, recently signed a production deal with a Berlin-based music company to the tune of $200,000. ()

The two had met nearly a decade ago in Georgia as they each tried to crack the music scene. Both went their separate ways, joined the Army and lost touch.

McQueen, 26, had left the service and was working security at Larson Barracks a few years ago when he saw Foster lugging some music equipment through the gate. The two recognized each other and soon started getting together to make music.

Now, the work that the two Americans have put in to rise up through the German hip-hop scene is paying off. They signed a production deal in January with Berlin-based Rawzone Records to the tune of $200,000, and will soon embark on a yearlong European tour.

There&#8217;s only one hiccup in the game plan: &#8220;G-Stats&#8221; is still Spc. McAnthony Foster of the 38th Personnel Support Battalion in Bamberg. He&#8217;s scheduled to get out of the Army at the end of this year after eight years of service, but that timetable would conflict with the tour and ongoing negotiations to sign Major Game to a major label record contract

Fotunately for the duo, Foster&#8217;s officer-in-charge said an obscure discharge regulation should allow Foster an early exit in the next month or so.

That regulation is a &#8220;convenience of the government discharge,&#8221; according to Chief Warrant Officer 2 Robert Braybo.

While the Army has no specific discharge chapter to release soldiers for other career opportunities, the convenience of the government discharge allows for things like winning the lottery or other dream-job contingencies, said Braybo, the officer-in-charge.

The final decision will be made by the 1st Infantry Division Support Commander, Braybo said.

Foster must first gather all relevant documents and provide proof that his rap career is indeed taking off, Braybo said, adding that the process should avoid any bureaucratic roadblocks because all the approving authorities are in the area.

Braybo said he has watched Foster work his rap career for the past few years, and supports his endeavors.

Hesitant to categorize their style, Foster, a Louisiana native, and Atlanta-born McQueen last week traded raps back and forth over homemade beats and tracks produced for them by Rawzone Records. Their sound is original and as polished as anything heard on the radio in the States.

Despite the advent of their 55-stop tour, the production deal money, extra income from shows and the major label deal that Rawzone is working to secure, McQueen and Foster said they are taking it all in stride.

Many American rappers get swept up in the prospect of big money, and let labels take advantage of them in the process, McQueen said.

The duo&#8217;s manager, Thomas Beckner, said the Major Game sound isn&#8217;t being put out by other German hip-hop acts, and that makes them a good sell in Berlin, Germany&#8217;s hip-hop capital.

While they look forward to expanding their European fan base, Foster and McQueen said there are noticeable differences in German hip-hop.

Foster said he&#8217;s enjoyed the Army and the opportunity to travel &#8212; he met his wife in Germany &#8212; but his rap dreams can&#8217;t wait any longer, and he hopes the Army recognizes his years of service and lets him go early.