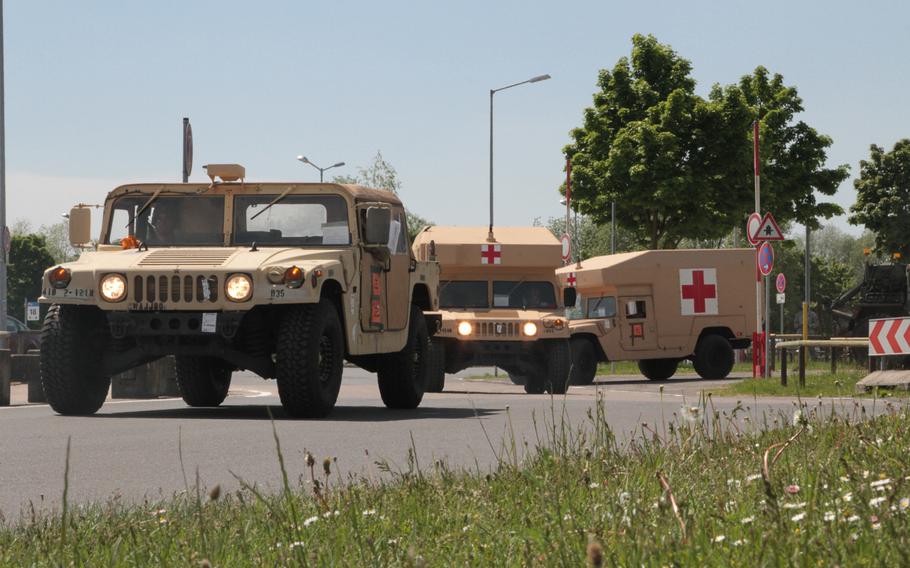 A High Mobility Multipurpose Wheeled Vehicle (HMMWV) and two military ambulances from the 2nd Battalion, 12th Infantry Regiment depart in a convoy from Nuremberg Airport, Germany on May 16, 2017. The light infantry unit recently completed an Emergency Deployment Readiness Exercise to Germany and is moving to Grafenwoehr Training Area for follow-on exercises over the next month. (Nicholas Vidro/U.S. Army)

A High Mobility Multipurpose Wheeled Vehicle (HMMWV) and two military ambulances from the 2nd Battalion, 12th Infantry Regiment depart in a convoy from Nuremberg Airport, Germany on May 16, 2017. The light infantry unit recently completed an Emergency Deployment Readiness Exercise to Germany and is moving to Grafenwoehr Training Area for follow-on exercises over the next month. (Nicholas Vidro/U.S. Army) 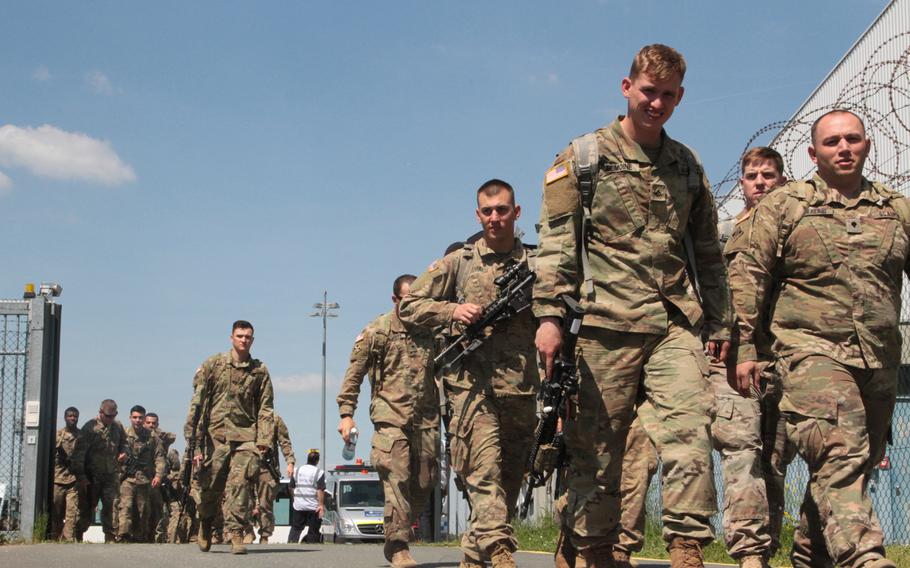 Soldiers from the 2nd Battalion, 12th Infantry Regiment, 2nd Infantry Brigade Combat Team, 4th Infantry Division, depart for training after a flight to Nuremberg Airport, Germany on May 16th, 2017. The battalion, which flew to Germany on short notice as part of an Emergency Deployment Readiness Exercise, will be using equipment from Army Prepositioned Stock sites during follow-on training in Bavaria. (Nicholas Vidro/U.S. Army)

WIESBADEN, Germany — U.S. Army Europe will be making use of its prepositioned equipment to allow Fort Carson-based 2nd Battalion, 12th Infantry Regiment, to participate in live-fire exercises at Grafenwoehr Training Area this month.

The light infantry battalion recently completed an Emergency Deployment Readiness Exercise from its home base in Colorado, arriving at two U.S. air bases in Germany over the past several days. Now, it will move east to Bavaria where it will take part in a variety of training events before returning home in roughly a month, said USAREUR’s lead planner for the exercise, Lt. Col. Robert Gunther.

“You don’t just deploy somebody someplace and then turn around and send them right back because it’s a waste of money and not a good use of training resources,” he said of the decision to send the unit to Grafenwoehr.

The additional time also represents an opportunity. While EDREs are commonplace Army-wide, this one affords European-based units to test their systems for a potential real-world crises in which large numbers of U.S.-based troops need to transported to the continent rapidly and moved eastward.

The stockpiles of heavy equipment, vehicles and tanks — or Army Prepositioned Stocks (APS) — at depots in Eygelshoven in the Netherlands and Duelmen in Germany, look set to be a major part of that effort.

“Theoretically the Army could send a unit over — just soldiers and their personal weapons, fall in on (heavy) equipment, sign for them and move out,” Gunther said.

This is not the first time the APS sites, whose primary role is to reduce deployment times in the event of a crisis, have been used to provide equipment for training events. But it’s still a new enough idea that Gunther says the 21st Sustainment Command, which oversees the sites, benefits from the experience.

“That is a real-world mission of theirs,” he said. “That’s another great opportunity for folks to learn.”

Maj. Christopher Richardson, chief logistician of the 4th Infantry Division Mission Control Element, currently based in Poznan, Poland, said the deploying battalion will not depend solely on the APS sites.

“They’re bringing some organic equipment from home station, which were able to fit in the aircraft.”

He added that rail transportation will be used to bring the rest of the equipment and supplies from various APS sites to Grafenwoehr, where the battalion will be waiting.

Last month, Lt. Gen. Ben Hodges, commanding general of USAREUR, led a delegation of senior U.S. and NATO logistics officers to various sites around eastern Europe where the alliance hopes to establish major hubs over the next decade, including Powidz in Poland and Mihail Kogaliceanu Air Base in Romania. The purpose of the trip was to streamline the ability of spread-out U.S. and NATO forces to rapidly respond in the event of a crisis.The planning process for this EDRE has helped to polish some processes, Richardson said.

“It all starts with fundamentals,” he said. “There’s several agencies involved with deploying a unit into or out of theater. It’s a great opportunity to test these systems and to see where we can improve or if there are any redundancies, and to see what we can cut back on.”