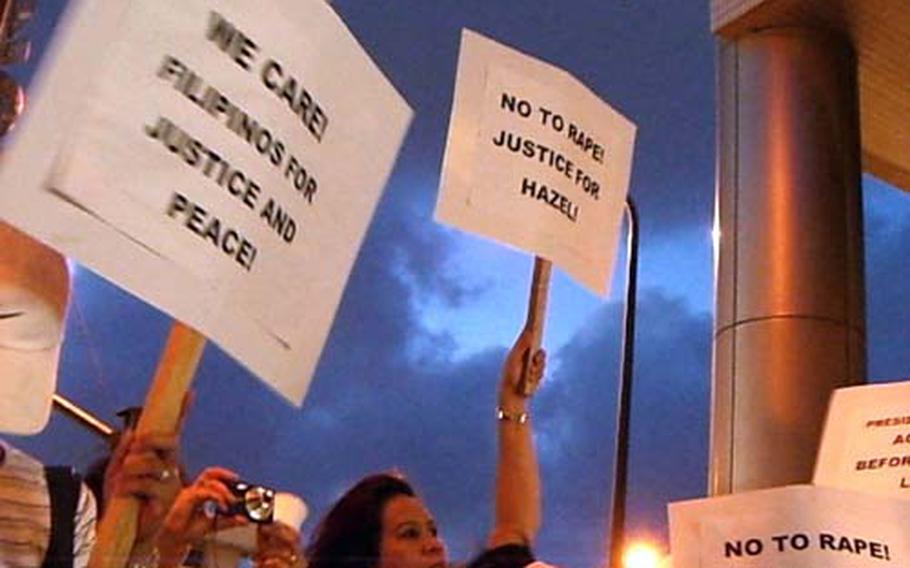 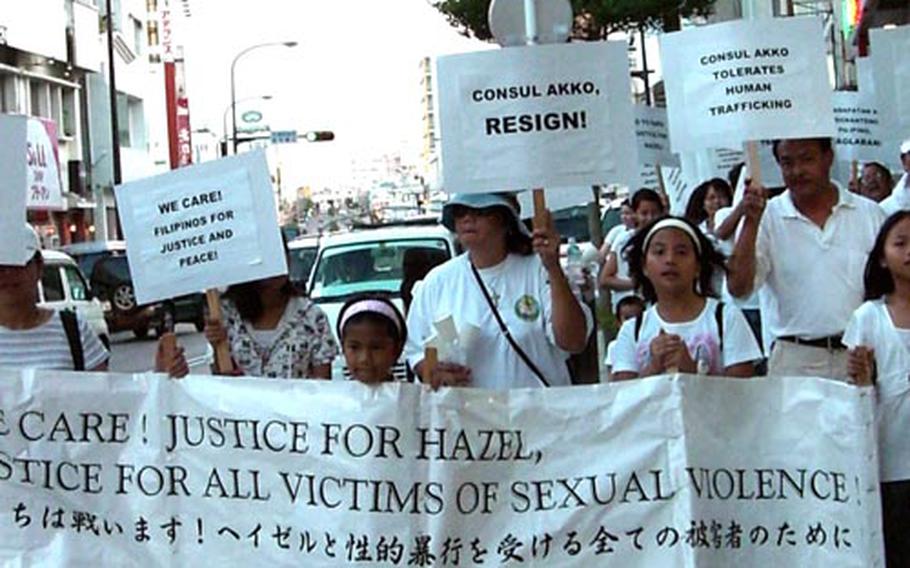 About 80 people from Philippine community on Okinawa and their supporters march Saturday. The protesters chanted, "Women are not for sale," as they walked in the Okinawa City entertainment district where the alleged attack took place. (Chiyomi Sumida / S&S)

CAMP FOSTER, Okinawa &#8212; The Army has preferred rape and other charges against an Okinawa-based soldier accused of assaulting a woman on Feb. 18.

Details of the charges were not released.

"The charges are focused around the accusation of rape and additional misconduct that came to light during the investigation," Kraus said. "Rape is one of them."

The 22-year-old alleged victim said she was raped on her third night in Japan on an entertainer&#8217;s visa by Hopstock, who told Okinawa police that he paid a "bar fine" to take the Filipina woman from the pub where she was working with the understanding sex was involved.

The woman, identified only as Hazel, said she was unaware when she came to Japan as a dancer that bar patrons would expect to be able to buy her for sex. She reported the incident after Hopstock allegedly attacked her while she was asleep in a room with him in an Okinawa City hotel.

The case drew international attention as one of two rape allegations against U.S. servicemember that month that led to restrictions being placed on all Americans attached to the U.S. military on Okinawa. The victim&#8217;s mother and women&#8217;s rights advocates spent five days on Okinawa recently to support her and investigate other alleged instances of human trafficking in Okinawa&#8217;s bar scene.

They also protested Japan&#8217;s handling of the incident. The case was handed over to Army officials when Japanese prosecutors, citing a lack of evidence, declined to indict the soldier in mid-May.

The next step in the military legal process, Kraus said, is an Article 32 hearing by an independent officer who would then make a recommendation to the convening authority, the commander of the 10th Support Group at Torii Station.

Hazel and her supporters greeted the news with relief

"We are very happy to learn about the Army&#8217;s decision," said Rommel Cruz, a priest at the Yomitan Catholic Church, who led a recent anti-trafficking march in Okinawa City. He said the first thing Hazel and her supporters did upon receiving the news from the Army was to pray.

Hazel, speaking through an interpreter, said she was happy to hear the Army&#8217;s decision to go forward with the case.

"I am no longer afraid of anything," she said. "I feel that my voice is finally heard."