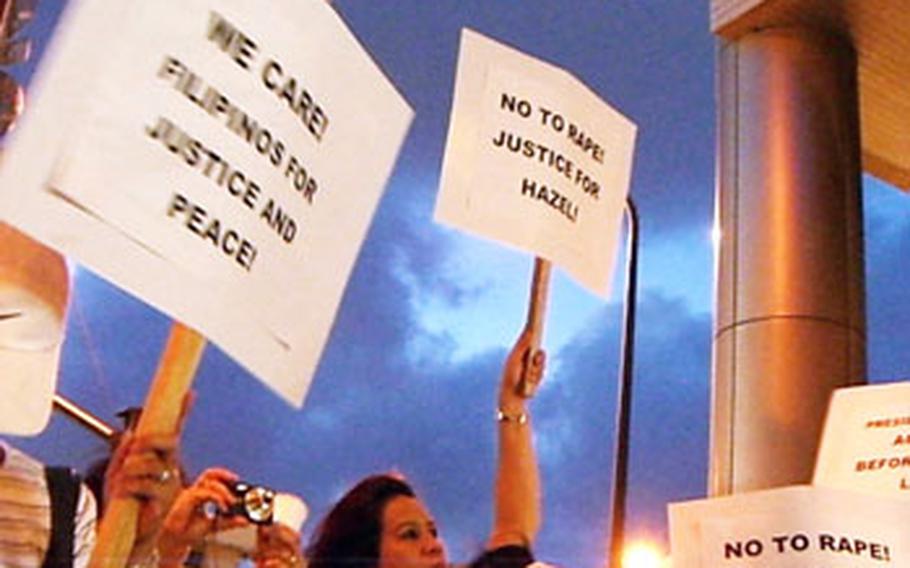 About 80 people from a Filipino community on Okinawa and their supporters gather during a July rally to demand justice for "Hazel," who was allegedly raped by Army Spc. Ronald Hopstock in February 2008. The case was dismissed Tuesday due to lack of evidence. (Chiyomi Sumida/Stars and Stripes)

KADENA AIR BASE, Okinawa &#8212; The rape charge that hung over Army Spc. Ronald Hopstock&#8217;s head for a year was dismissed during a court-martial Tuesday morning.

In a hearing that took less than three hours, Hopstock, initially charged with raping a Filipina bar worker in an Okinawa City hotel last February, pleaded guilty to three unrelated charges and the rape case was dropped.

The Army judge sentenced him to eight months of confinement, reduction in rank to E-1, forfeiture of all pay and a bad-conduct discharge for disobeying an order requiring him to have another soldier with him whenever he left the base, and for paying a prostitute for sex on 20 different occasions between April 2007 and Jan. 1, 2008.

Due to a pretrial agreement, the length of Hopstock&#8217;s confinement will be limited to six months.

Whether that happens is up to Army Col. James Woodard, commander of the 10th Support Group.

Hopstock, 25, of the 1st Battalion, 1st Air Defense Artillery Regiment on Kadena Air Base, apologized for his actions. He said he was introduced to the Okinawa sex trade by other members of his unit.

They took him to a district known as "Hooker Hill," where scantily clad prostitutes sit behind large picture windows. He said he frequented only one shop, a run-down brothel known as Shampoo, that has since been placed off-limits to all military personnel.

He told the judge he paid $50 for 15 minutes with the same woman on all occasions.

Not a word was said in the courtroom about the case that led to the court-martial.

On Feb. 17, Hopstock took a young Filipina dancer he met at an Okinawa City nightclub to a hotel, where she was injured while having sex.

He admitted to investigators that he paid a $200 "bar fine" to an employee of the Mermaid, a bar on Park Avenue, for the dancer&#8217;s company and claimed the sex was consensual.

During a preliminary hearing in October, the 22-year-old dancer, known publicly only as Hazel, testified she had been on Okinawa for only three days when the incident occurred and that she knew nothing about bar fines.

But defense evidence at that hearing showed she must have known what being a dancer at a club on Okinawa would entail. Hazel had spent two months as a hostess at a karaoke bar in Hong Kong and bought revealing clothing and practiced "sexy dancing" before coming to Okinawa.

In May, Okinawa prosecutors turned the case over to the Army, citing a lack of evidence to prosecute Hopstock in a Japanese court.

The same reason was given for dismissing the rape charge Tuesday.

"There was a lack of preponderance of evidence," said public affairs officer Maj. James Crawford.

"The government is only going to prosecute somebody when they think he&#8217;s guilty of a crime. The government went through a long process of investigation, including going to the Philippines for depositions of witnesses, and at the end the government had to review everything and make a decision whether to go forward."

Hazel&#8217;s supporters were stunned by the outcome. Rommel Cruz, a priest at Yomitan Catholic Church, sat through the morning hearing and was confused to hear the rape charge was dropped.