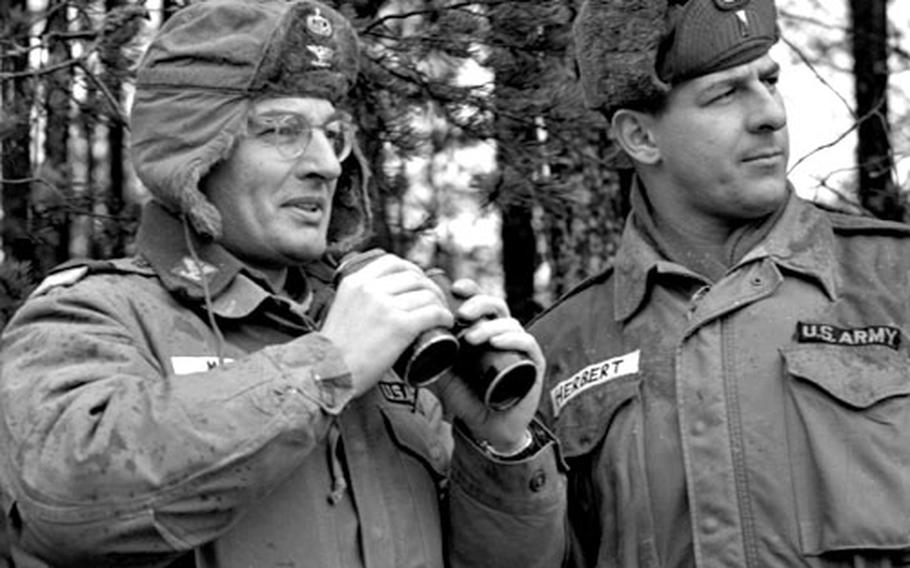 VILSECK, Germany &mdash; Could you survive the rigors of a week in the woods on a package of rations that fits into your watch pocket?

Could you run seven miles in 51 minutes with a pack and rifle on your back?

If not, you couldn't qualify for the 8th Inf Div's Ranger Platoon &mdash; a tough, 44-man patrol with the 505th Abn Battle Gp. And its members say it is the only platoon of its kind in the Army.

Formed under direct supervision of the battle group CO, Col Theodore Mataxis, the Ranger Platoon trained seven weeks before moving into Winter Shield II as a part of the "NATO" forces.

The exclusive Ranger Platoon is no chance organization.

Under training of 1st Lt Anthony Herbert, most decorated soldier in the Korean conflict, it is a dedicated unit operating on the philosophy that mobility is the infantryman's best attribute in nuclear warfare.

Herbert, winner of 29 decorations in Korea, explained his concepts of the Ranger mission:

"Should an enemy be scattered as a result of atomic (artillery) fire, then we would be able to attack, and should he regroup, we would report him as a nuclear artillery target.

"We have added to our effectiveness by keeping our equipment light. This increases our mobility."

While operating in the Taunus Mountain training grounds, the Rangers have worked to improve their mobility. They have found they can stuff enough dry rations &mdash; soup, coffee and tea &mdash; to last a week into a watch pocket, a small piece of rope will provide them with fire for a week, and that they can tape 15 terrain maps into a small package.

By scounging from the land, they have learned to augment their dry-food diet.

"We need men who like to think independently and who don't mind working alone. This is not a noisy showoff outfit. We want our men to be quiet, even in the face of sudden adversity and pain," Herbert said.

"A man has to be strong physically, but an even more important requirement is self-discipline."

Herbert is a former instructor at the Army Ranger School at Ft. Benning, Ga., (he served two years as a sergeant and 2&frac12; as a lieutenant).

Rangers carry rifles and machine guns and a double load of ammunition, made possible by holding down the weight of their rations.

Tactically, the rangers are divided into small groups capable of staying days at a time in the field.

They pick up information from all available sources to improve their effectiveness. "We will need a 300-page book just to get. one idea," Herbert said. "And we don't mind checking the procedures of foreign armies for ideas.

"I personally believe in specialized training," Herbert added. "Our men are infantrymen making use of every trick and technique. Because of their diversity and special training, one man often would be able to tie up a large number of the enemy or to knock out a heavy piece of equipment.

"I think statistics will prove that for actual hours on the battlefield, the casualty rate of this type of unit isn't as high as for the average infantry outfit."

Weather-beaten Sfc Walter Vick, a patrol leader for the outfit, tersely summarized the philosophy of the outfit. "We just like to soldier. That's all."

Pointing to a group of rangers preparing to move Herbert said:

"These are first-rate men. They don't talk much about their exploits. They do their talking out there on the patrol."