An Iraqi woman votes in Baqouba, where there were no reports of violence. Early reports indicated a low turnout in the city. (Heath Druzin / S&S)

An Iraqi woman votes in Baqouba, where there were no reports of violence. Early reports indicated a low turnout in the city. (Heath Druzin / S&S) 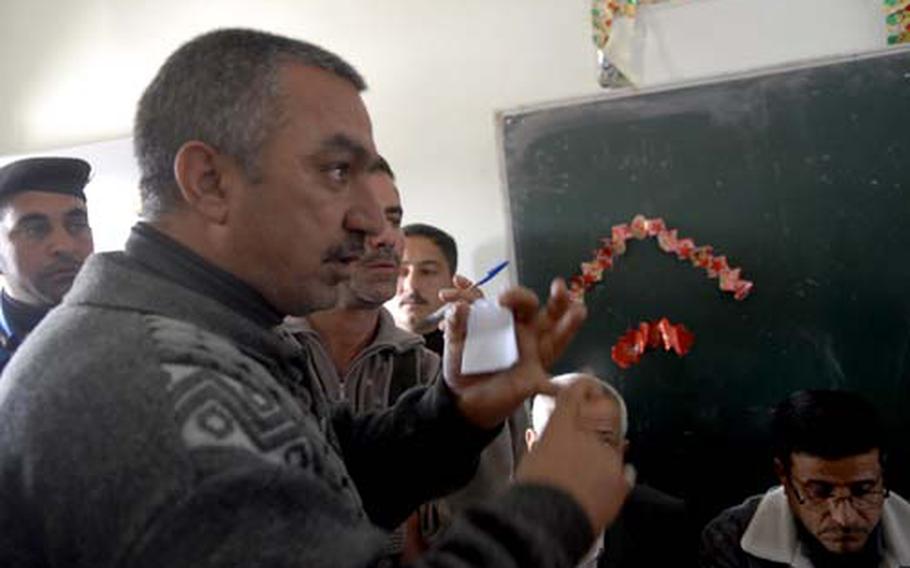 Fares Sabheh Haider argues with an election official in Baqouba, Iraq, after being turned away from the polls because his name was not on the registration list for those eligible to vote in Saturday’s provincial elections. (Heath Druzin / S&S)

BAQOUBA, Iraq &#8212; Election day was peaceful in this restive Sunni stronghold, but early indications showed low voter turnout, and some residents complained of long walks to the polls.

With Iraqi army and police guarding polling stations and U.S. forces staying on the fringe as a "third ring" of security, no violence had been reported as of 5:30 p.m., with just a half-hour remaining before polls closed, according to military officials.

Toward the end of the voting period, turnout in some Sunni neighborhoods was running well under 50 percent, with some polling in the 30s and only a trickle of voters still showing up. Diyala province has been closely watched by analysts because much of its large Sunni population boycotted the last elections, giving them little representation in the current government.

Voters were searched before going in polling stations, and booths were set up to give women privacy while they were searched. Security forces were especially concerned about reports of plans for a wave of female suicide bombers, a tactic used frequently in Baqouba.

Those who did vote, their index fingers stained with indelible ink to prevent double voting, were mostly upbeat.

"Things will change for the better," said Raad Awad, who voted in a largely Sunni neighborhood.

A woman in a largely Shiite neighborhood, who declined to give her name, said she voted in the hopes that the government will fix problems with electricity and clean water in her neighborhood. Many in Diyala have expressed deep dissatisfaction with the government&#8217;s inability to provide essential services.

"I hope this election will bring something different," she said.

Authorities in Baqouba, normally a bustling city of 500,000 people, blocked traffic into the city, and the only vehicles on the roads as polls opened at 7 a.m. were lumbering U.S. Strykers and Iraqi police and army pickup trucks. The road closures were aimed at deterring car bombs, and were lifted late in the afternoon by order of Prime Minister Nouri al-Maliki.

Residents and election officials said the road closures kept some people from voting.

"My family didn&#8217;t vote because it was too far away, and they would have to walk," said a Sunni man outside a polling station. He said he attempted to vote for his family members, which is barred by election rules.

There were also reports of people being turned away because their names were not on registration rolls, though it was unclear how widespread the issue was. Some said they had been chased out of their homes by violence, only recently returned, and did not realize they had to reregister.

"I&#8217;ve lived in this area for 20 years," said Fares Sabheh Haider, who was arguing with an election official who had turned them away.

The election official, Anwar Fadham, said 350 people were turned away from his polling station alone because they had not registered in the proper place. He was unmoved by Haider&#8217;s pleas.

Voting hours were originally scheduled from 7 a.m. to 5 p.m. but were extended by an hour late in the day.