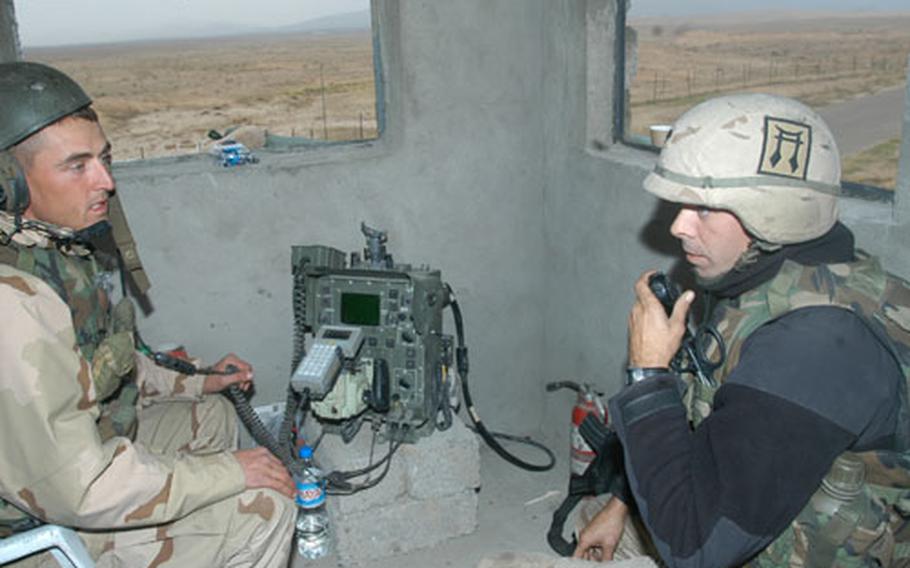 SINJAR, Iraq &#8212; The Humvees cruise along the moonlit road on the Iraq-Syria border, headlights switched off. The soldiers are on the lookout for smugglers carting cigarettes, benzene, sheep and weapons.

A couple of times a week at sunset, about a dozen men from the 101st Airborne Division&#8217;s 2nd Battalion, 187th Infantry Regiment, 3rd Brigade make the hourlong drive from Range 54 to the border. Responsible for a 70-mile stretch of the boundary, the soldiers scan the surrounding farmland.

Smugglers travel on foot, on donkey and in vehicles, a dozen of which the men search on a recent night. The four Humvees stop and the soldiers jump out, pointing flashlights at an approaching car on a road that runs parallel to the border, which is just a couple dozen feet away.

The soldiers gesture for the men to open the trunk. It is empty.

A biting wind whips through the Humvees, which have no doors. Soldiers, especially those in the turrets such as Spc. Justin Turk, layer their clothes to keep warm. Rubbing his hands together, Turk yells down, &#8220;Great, it&#8217;s starting to rain.&#8221;

The men don&#8217;t say much during the four-hour patrol across the barren terrain.

Later, a radio call comes in.

&#8220;Range 54 just got hit,&#8221; said Staff Sgt. Stephen Roberts, the section leader sitting in the passenger seat. A few rockets had hit just outside the camp.

That didn&#8217;t mean Company D was abandoning its nighttime patrol.

The Humvees continue, stopping at one of four Iraqi border patrol points, small buildings about 50 feet from Syria. Soldiers smoke cigarettes and play with a puppy as the platoon leader, 1st Lt. Andrew Carrigan, 23, from Boston, talks to the Iraqis. He instructs the interpreter: &#8220;Tell them to keep up the good work.&#8221;

Some of the Iraqis follow the Humvees in pick-up trucks for about an hour. Soon they will be patrolling the border alone; the battalion, which arrived in Sinjar in May, returns to Fort Campbell, Ky., in January.

With the Iraqis in tow, the group stops near some abandoned buildings. Soldiers walk along the border, a dirt berm, while looking through night-vision goggles for smugglers. In the distance, lights twinkle in a Syrian village.

&#8220;It&#8217;s a pretty country at night,&#8221; said Sgt. 1st Class Jeffery Bond. Bond once caught a man smuggling a rocket-propelled grenade launcher, hobbling across the desolate field on crutches with pins in his leg.

People still get past the old 3-foot-tall berm, which has many breaks, to smuggle goods into and out of the country. Benzene fetches four times the price in Syria than in Iraq. Iraqi police deal with most smugglers, but U.S. soldiers take care of those caught sneaking weapons into Iraq.

While most border patrols are uneventful, one night in early December was anything but routine.

Company D was shadowing the Iraqi border patrol when they came under fire from machine guns.

Pfc. Evan Teeves, normally a driver, had switched positions with the gunner just before the firefight. Teeves shot off quite a few rounds.

The attackers fired back for almost an hour. No Americans or Iraqi border patrolmen were hurt, and an unknown number of people on the other side of the border were either injured or killed.

&#8220;We strongly suspect the Syrian border patrol earns extra money by providing some of the security for these guys [smugglers],&#8221; said the battalion commander, Lt. Col. Hank Arnold, 39, from Pensacola, Fla.

And on the rare occasion when Range 54 is attacked, everyone springs into action.

The soldiers who were on the border patrol on the recent night when the camp was attacked eventually were asked to assist some scouts. The scouts, prowling around Sinjar&#8217;s outskirts searching for the suspected attackers, had been fired upon.

The Humvees that had been patrolling the border now crept through fields looking for attackers.

Roberts, 25, from Springfield, Tenn., yelled up at Turk, the gunner.

There were no further attacks that night. The platoon returned to camp around 11 p.m. At 3 a.m., the soldiers went back out to patrol the area.

It was a late night for all the battalion&#8217;s soldiers.

The next morning, other soldiers raided a couple of nearby homes and arrested a father-son team suspected of making weapons. The purpose of the raids was to make a statement, Jenio said.

SINJAR, Iraq &#8212; Infantrymen earned their spurs when the cavalry called them in to help quell trouble.

The infantrymen&#8217;s reward: The cavalry inducted them into the Order of the Spur, giving them the authority to wear spurs and a traditional Stetson hat for formal occasions.

&#8220;If a unit gets attached and fights along cavalry in combat, it can be inducted into the Order of the Spur,&#8221; said Capt. Derek Mayfield, commander of Company C, 2nd Battalion in Sinjar.

The soldiers were called in because the cavalry wasn&#8217;t designed to handle conflicts in such an environment, said Lt. Col. Hank Arnold, 2nd Battalion commander.

&#8220;[The cavalry] is a force that is designed and equipped and manned to fight completely mounted in battle chariots, in tanks and Bradleys,&#8221; he said. &#8220;They&#8217;re not designed to hold ground or search into bunkers or fight in urban terrain. This environment requires boots on the ground, engaging the locals by being in their neighborhoods.&#8221;

The soldiers encountered no resistance other than the first day, when they came under mortar and small-arms fire while searching houses.

The soldiers said they welcomed the faster pace, a change from their Range 54 camp in northern Iraq.

Company C soldiers returned to Range 54 with plenty of stories to tell, including one that Pfc. Jamie Hartman won&#8217;t soon live down.

Soldiers turned around to look at Hartman, and he was on all fours, a 30-foot geyser spewing water behind him.