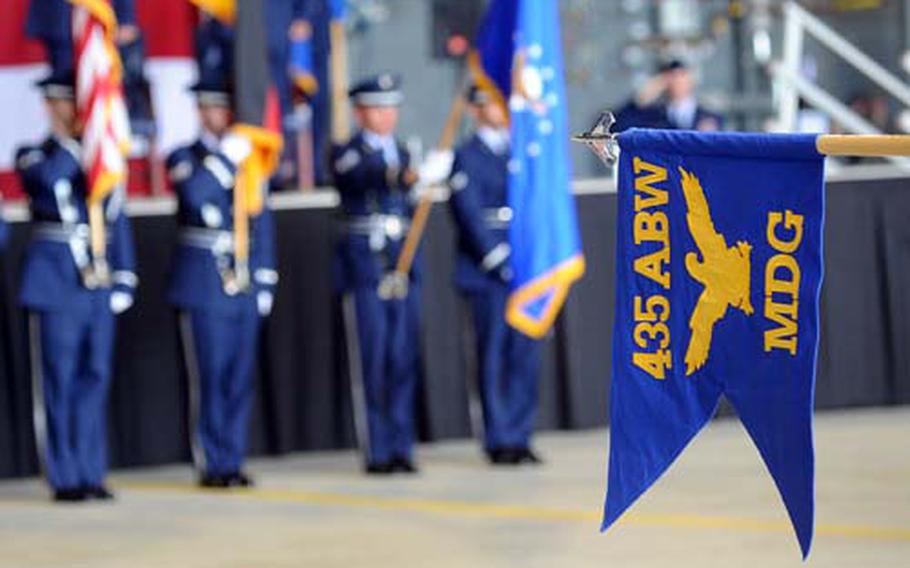 The guidon from the 435th Air Base Wing’s medical group is shown during a wing inactivation ceremony at Ramstein Air Base, Germany. (Michael Abrams / S&S)

The guidon from the 435th Air Base Wing’s medical group is shown during a wing inactivation ceremony at Ramstein Air Base, Germany. (Michael Abrams / S&S) 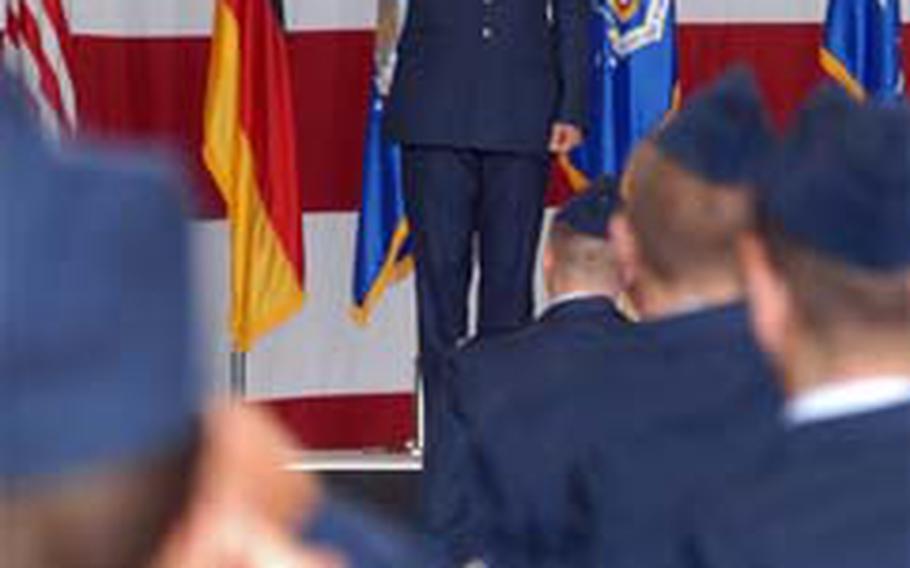 Col. Thomas Gould returns a first salute from the airmen of the newly activated 435th Air Ground Operations Wing at a ceremony at Ramstein Air Base, Germany, where the 435th Air Base Wing was inactivated. Gould was commander of the 435th ABW and is now in charge of the 435th AGOW. The new wing is the first of its kind in U.S. Air Forces in Europe, and the second in the Air Force. (Michael Abrams / S&S)

RAMSTEIN AIR BASE, Germany &#8212; The Air Force&#8217;s largest air base wing at this busy airlift hub in southwest Germany was reorganized Thursday into a much smaller wing with a unique focus.

The 435th Air Base Wing was redesignated the 435th Air Ground Operations Wing, with the sole purpose of supporting so-called &#8220;battlefield airmen.&#8221; As such, it&#8217;s the first wing of its kind in U.S. Air Forces in Europe and only the second in the Air Force.

The reshuffling of personnel also puts the 86th Airlift Wing in the driver&#8217;s seat, making it the lead wing at Ramstein in charge of operations, maintenance, infrastructure, medical services and personnel support functions for about 9,000 airmen.

The new air ground operations wing will be composed of about 1,200 airmen, according to Air Force officials. Two 86th Airlift Wing units &#8212; the Contingency Response Group and the Air and Space Communications Group &#8212; merged, and together with the 4th Air Support Operations Group of Heidelberg, formed the new wing during a ceremony Thursday at Ramstein.

The wing&#8217;s &#8220;battlefield airmen&#8221; support joint or coalition forces from the ground by preforming tasks like coordinating firepower, issuing tactical weather reports or providing secure communications in a deployed environment, said Col. Thomas Gould, who took command of the new wing a month after assuming command of the 435th Air Base Wing.

He said stacking the units under one wing will help streamline training, deployments and equipment, while also giving the airmen a strong advocate for resources.

The 86th picked up the bulk of the 435th Air Base Wing&#8217;s missions, including logistics, medical, mission support and civil engineering. Brig. Gen. Bill Bender remains the airlift wing commander and the senior military representative of the Kaiserslautern military community.