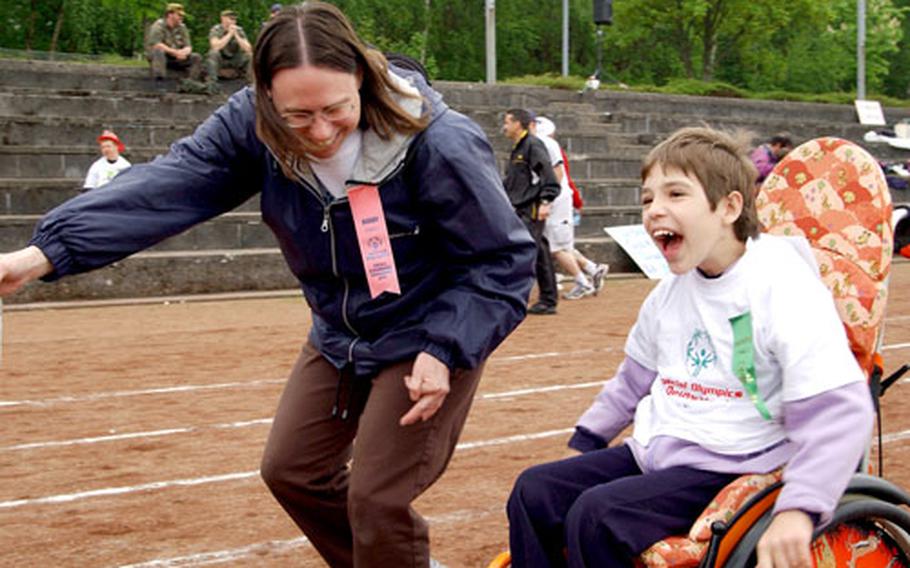 A volunteer cheers on a participant during the 2004 Special Olympics at Enkenbach-Alsenborn, near Kaiserslautern, Germany. The 2005 games will be held Wednesday. (S&S file photo)

More than 700 German and American athletes will participate Wednesday in the 22nd annual Special Olympics. And organizers are seeking volunteers for the games, which will take place from 9 a.m. to 3 p.m. at the German Police Academy in Enkenbach-Alsenborn.

Volunteers gain almost as much from the event as the special-needs children and adults competing in the games, said Lisa Hartmann, marketing specialist/commercial sponsorship coordinator for the 415th Base Support Battalion.

&#8220;It makes you realize that whatever everyday problems you are having are not anything compared to what feats these athletes go through to accomplish this,&#8221; Hartmann said.

On Wednesday, the parade of athletes begins at 9 a.m. followed by the opening ceremonies at 9:40 a.m. Then, the games begin.

Children and adults with special needs will compete in seven games ranging from tennis to track and field. Those from ages 5 to 7 will enjoy 12 noncompetitive games such as a treasure hunt and ring toss.

Awards will be handed out around 2 p.m., and the day culminates with the closing ceremonies scheduled for 2:40 p.m.

The games are open to spectators at no charge, and food vendors will be there for those attending.