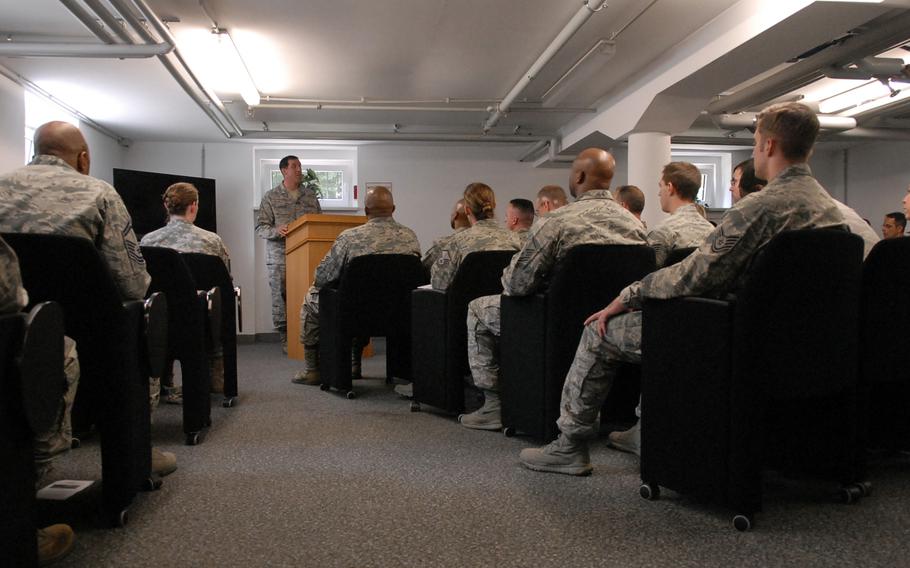 Buy Photo
Staff members with the Air Force Deployment Transition Center at Ramstein Air Base, Germany, along with guests listen to Master Sgt. Corey Hancock talk about the history of the center during a ceremony Tuesday. The center was celebrating its third-year anniversay. (Jennifer H. Svan/Stars and Stripes)

Buy Photo
Staff members with the Air Force Deployment Transition Center at Ramstein Air Base, Germany, along with guests listen to Master Sgt. Corey Hancock talk about the history of the center during a ceremony Tuesday. The center was celebrating its third-year anniversay. (Jennifer H. Svan/Stars and Stripes) 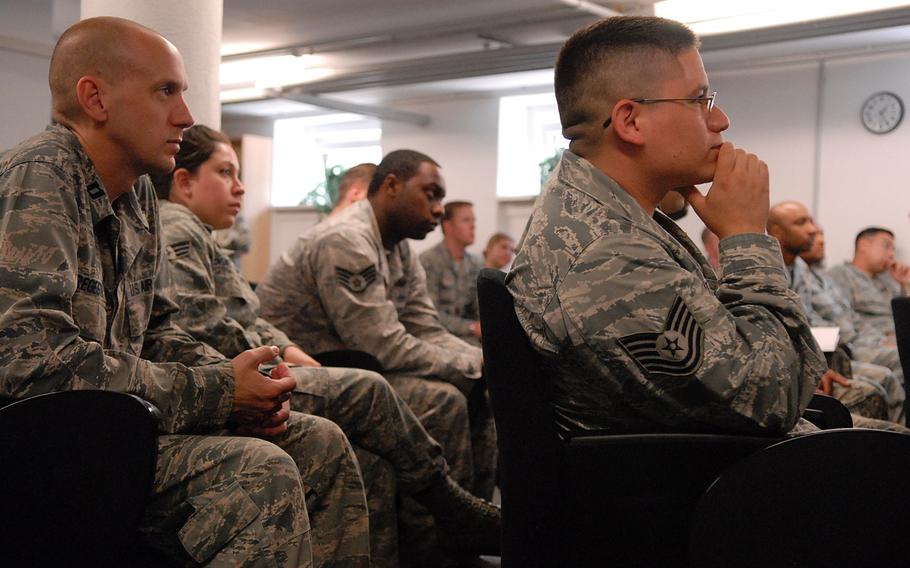 Buy Photo
Airmen listen during a ceremony Tuesday at the Air Force Deployment Transition Center on Ramstein Air Base, Germany. The center, the only of its kind in the Defense Department, has supported more than 6,000 servicemembers since opening its doors in July of 2010. (Jennifer H. Svan/Stars and Stripes) 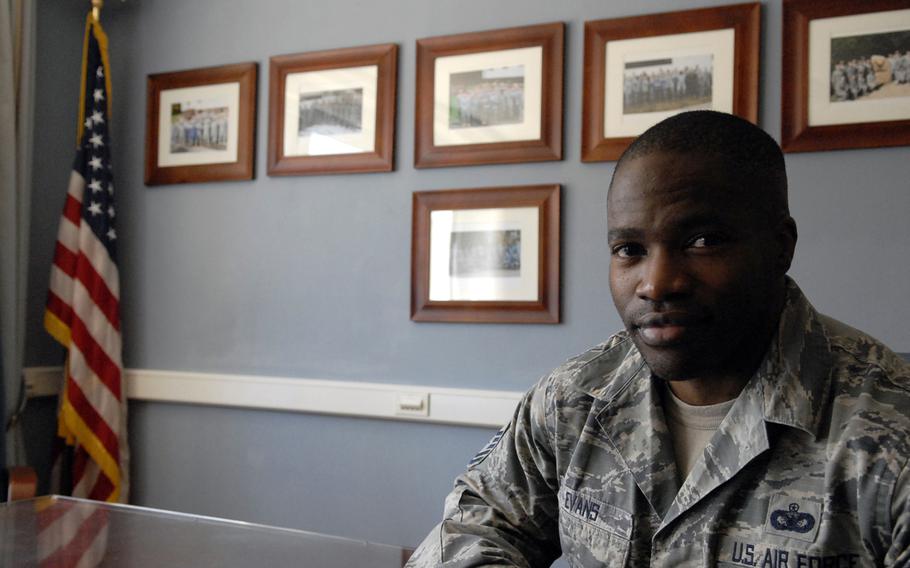 Buy Photo
Air Force Master Sgt. Lloyd Evans, a security forces dog handler, is one of about 25 staff members at the Air Force Deployment Transition Center at Ramstein Air Base, Germany. The center celebrated its third anniversary Tuesday. Evans shared his story of the struggles he experienced after returning from a deployment in Iraq and how working at the center helped him cope. (Jennifer H. Svan/Stars and Stripes) 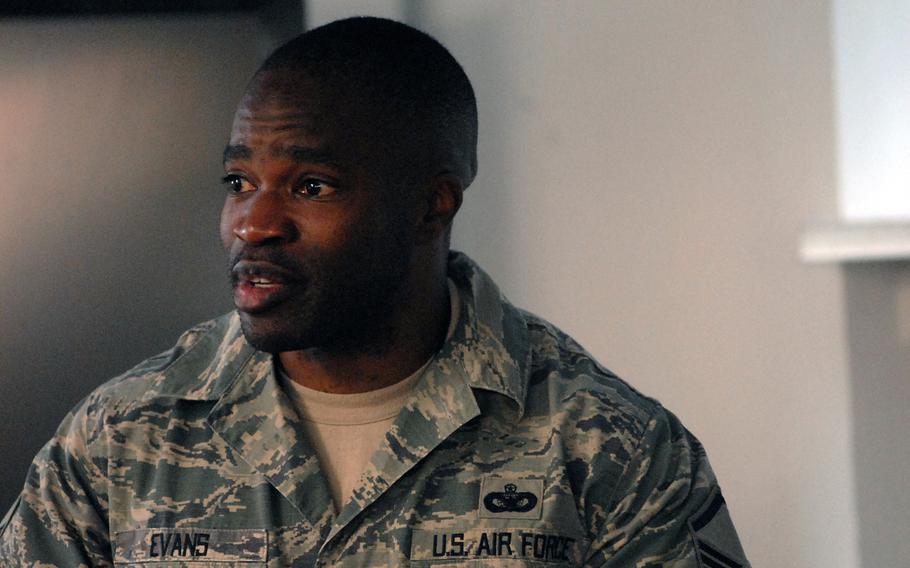 Buy Photo
Air Force Master Sgt. Lloyd Evans, a security forces dog handler, wells up while speaking at the Air Force Deployment Transition Center's third anniversary ceremony on Tuesday. Evans shared his story of the struggles he experienced after returning from a deployment in Iraq and how working at the center helped him cope. (Jennifer H. Svan/Stars and Stripes)

RAMSTEIN AIR BASE, Germany — Even when he talks about it today, more than three years after returning from a brutal yearlong deployment to Iraq, Master Sgt. Lloyd Evans can’t suppress his emotions.

The Air Force security forces dog handler from Austin, Texas, welled up while sharing his story Tuesday at the place where he finally was able to find relief from the demons that dogged him after returning home from war.

Evans was the guest speaker at a small ceremony to mark the third-year anniversary of the Air Force Deployment Transition Center.

The only one of its kind in the Defense Department, the center was established to help troops decompress after deploying in dangerous jobs and to prepare them to return to day-to-day life.

The program welcomed its first airmen on July 3, 2010 – a team of explosive ordnance disposal airmen who “arrived with a lot of trepidation and a lot of scrutiny,” said Lt. Col. Robert Rossi, the center’s commander.

But, by program’s end, the unit’s flight chief expressed gratitude for giving the airmen a place to “pause” between leaving the war zone and going home, Rossi said.

“To me, that’s everything,” Rossi said, of seeing airmen arrive with that tired, “zombie look” only to be saying thank you four days later.

Since opening, the center has supported more than 6,000 servicemembers, staffers said Tuesday, including more than 600 Marines and 30 Navy explosive ordnance disposal sailors.

Though originally developed for airmen who deploy “outside the wire,” the program has been expanded to support airmen exposed to significant combat stress – such as, for example, an airman in finance working at a base that gets mortared. The Marines and Navy adopted a similar program and began using the center for their own troops after observing the Air Force’s program, DTC staffers said.

The center was also called on to support servicemembers who witnessed the shootings at the Frankfurt airport in March 2011, when a gunman opened fire on a U.S. military bus, killing two airmen and seriously injuring two others.

“They stayed longer than four days,” Evans said, who personally drove to the airport to get the personnel since he was working at the center at the time. “Some of the guys … still had blood on their shirts (when they arrived).”

The center wasn’t open in time to help Evans, 39, when he returned to Dyess Air Force Base in January 2010 after one year in Iraq, where he was the squad leader for a group of airmen training Iraqi police station commanders and recruits. His team lost a first lieutenant and two airmen were injured; about half a dozen Iraqi colleagues and friends Evans worked with were kidnapped or killed, including an intelligence officer whose entire family was blown up in a car bombing.

“That’s a lot to take on,” Evans said in an interview after Tuesday’s ceremony. “All that stuff coming back from a deployment on my mind and nowhere to actually put it. We went right back home.”

Evans coped by running himself so hard he could barely walk in the morning, by spending hours a day in the gym and drinking too much alcohol, “trying to kill the pain.”

It took a move to Spangdahlem Air Base, Germany, and intervention from a supervisor for Evans to get the help he needed. Diagnosed with post-traumatic stress syndrome, he began to feel better after sessions with a counselor and taking medication. It was then that the commander of the 52nd Security Forces Squadron at Spangdahlem suggested a temporary assignment working at the Deployment Transition Center might be a good fit for Evans.

That was in 2010. Evans is now on loan a second time from Spangdahlem for another six-month assignment at the center, where he arranges logistics and activities for incoming airmen.

The four day program includes two days in “the classroom,” where airmen are encouraged to share their experiences downrange and staffers discuss what emotions they might experience after they get home and how to get help. One day is spent visiting Trier or Heidelberg – an excursion to a city with crowds, an experience that can be unexpectedly unnerving for some. Airmen at the center can drink alcohol, but there’s a limit,” Evans said.

“We ease them into it. When you drink, emotions come out,” he said. Sometimes people “scream, yell, they want to get all those things out,” he said, adding the staff helps them deal with that.

Rossi said an Air Force study “showed evidence the program was having a positive impact” by “reducing PTSD symptoms, problems at home and at work and also with alcohol.

“We will continue to support returning airmen … as long as we have a need to do so,” he said.