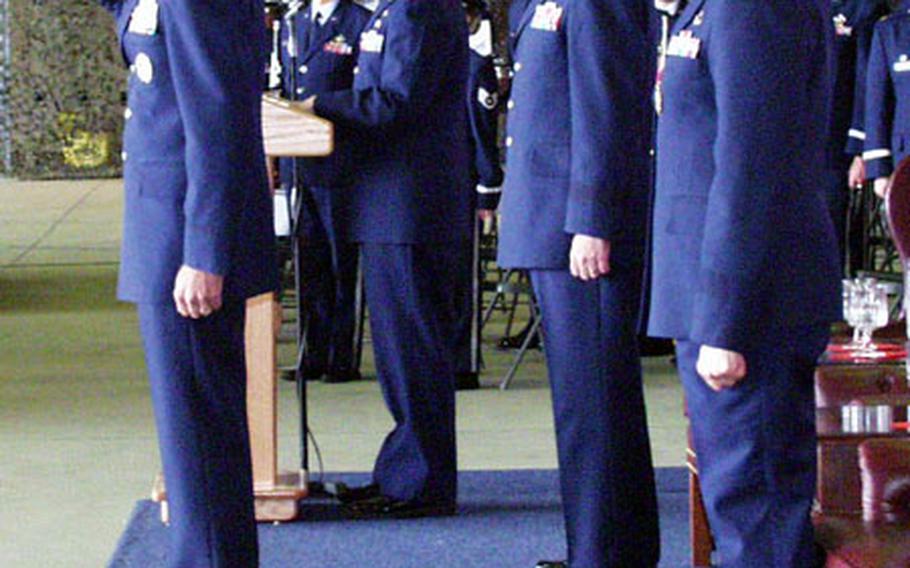 Col. Kurtis D. Lohide was installed as 435th Air Base Wing commander at a Thursday afternoon ceremony, but did not inherit Bailey&#8217;s command of the Kaiserslautern Military Community.

The switch is because of an impending shift set to take place at Ramstein.

The base is preparing to accept a large increase in U.S. military air traffic when Rhein-Main Air Base closes at the end of the year. For roughly the past two years, Ramstein has been in the midst of $385 million improvement project in anticipation of the increased traffic.

During that rebuilding mode, the role of KMC commander was better served by a logistics commander, according to a 435th Air Base Wing news release.

Now with the majority of construction near completion &#8212; including the expansion of its runway &#8212; the base is moving toward an increase in flight operations.

And a brigadier general will once again staff the role of KMC commander once Kane receives his promotion.

After ending her speech in which she thanked all those in attendance, Bailey had some encouraging words for her successor.

Lohide comes to Ramstein from Nellis Air Force Base, Nev., where he served as commander of the 99th Mission Support Group.

He opened his speech Thursday with a joke about how while in Las Vegas people sometimes mistake him and his wife for Nick Lachey and Jessica Simpson, who recently performed at Ramstein.

An avid marathon runner, Lohide recently finished the 26-plus miles of the San Diego marathon in less than four hours. He said he kept 26 coherent beliefs &#8212; one for each mile &#8212; in his mind during the marathon to keep his mind off the pain.

He listed those in his speech Thursday.