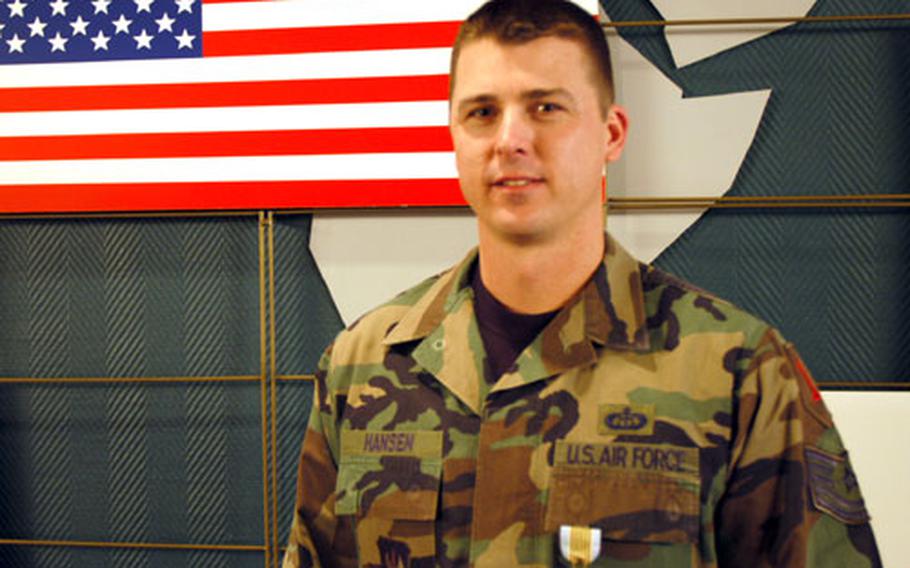 RAMSTEIN AIR BASE, Germany &#8212; Excitement and relief is how Tech. Sgt. Sean Hansen described the feeling of receiving the Airman&#8217;s Medal from Gen. Robert &#8220;Doc&#8221; Foglesong on Thursday morning.

Excitement over receiving the Air Force&#8217;s highest noncombat medal. Relief that the award ceremonies and photo shoots are over &#8212; back to normal life with the kids.

Hansen, a weather forecaster with Detachment 1 of the 7th Weather Squadron in W&#252;rzburg, received the medal for saving a 7-year-old boy from two attacking Rottweilers in his neighborhood outside W&#252;rzburg in January 2004. The dogs were tearing at the boy&#8217;s flesh outside Hansen&#8217;s home, and Hansen fought them off by punching them.

Stories of Hansen&#8217;s actions graced the front pages of several national German newspapers, Hansen said, and reporters descended on his home for interviews. In the past year, the mayor Hochberg where he lives presented a coin to him, and the minister president of Bavaria gave him an award.

The boy who was attacked still wears special pants to help reduce scarring on his legs and attends regular meetings with a psychologist to help with trauma he suffered during the attack, said Hansen, who still visits with the boy from time to time.

The dogs, owned by a U.S. soldier whose name was not released, were shot by German police.