Ramstein students hear of the serious and silly in space 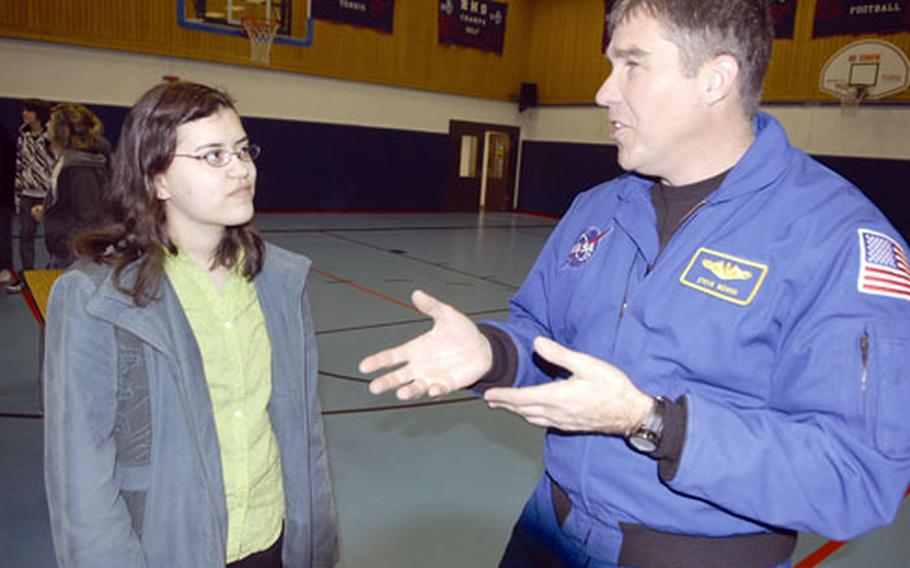 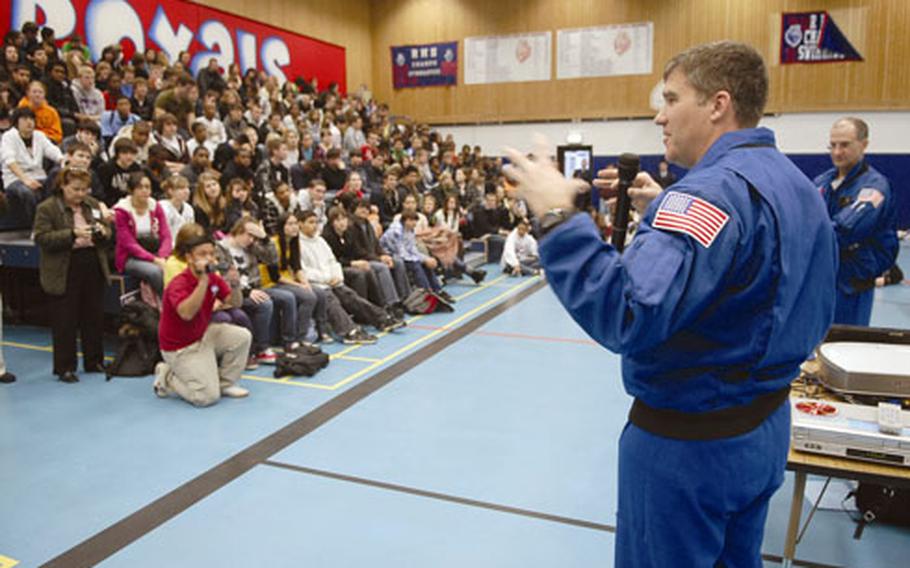 RAMSTEIN AIR BASE, Germany &#8212; The life of an astronaut in space is not all glamorous.

Sure, the views of Earth are breathtaking, but while reveling in celestial beauty, astronauts may one day be drinking water converted from their own urine. That stomach-turning revelation came from two of NASA&#8217;s own space travelers during a presentation Wednesday at Ramstein American High School.

"We call it the coffee machine. It takes yesterday&#8217;s coffee to make today&#8217;s coffee," Donald Pettit said of the pee processor, drawing a chorus of groans and giggles from the teenage audience.

Pettit and Navy Capt. Steve Bowen, the first submarine officer chosen by NASA as a mission specialist, were among six astronauts touring the Kaiserslautern area Wednesday on the tail end of an Armed Forces Entertainment sponsored tour.

In November, the crewmembers returned from a 16-day space shuttle Endeavour mission to the International Space Station, where they delivered a new bathroom, kitchenette, two bedrooms, an exercise machine and the water recycling machine &#8212; as NASA calls it &#8212; among other items.

On their current overseas trip, the astronauts visited with U.S. troops deployed to Kyrgyzstan, Afghanistan and Qatar, said Col. Edward Shock, chief of Armed Forces Entertainment at the Pentagon, noting it was the first time that NASA sent astronauts to a deployed location.

"It was a real privilege for us to go out and see the hard work that everyone is doing," Bowen said of deployed servicemembers. "It&#8217;s not an opportunity we get usually."

Students wanting to know what it takes to become an astronaut were told the path isn&#8217;t easy, with the selection rate for NASA&#8217;s space program about 0.7 percent. Do well in school, which will lead to more career options, Bowen said.