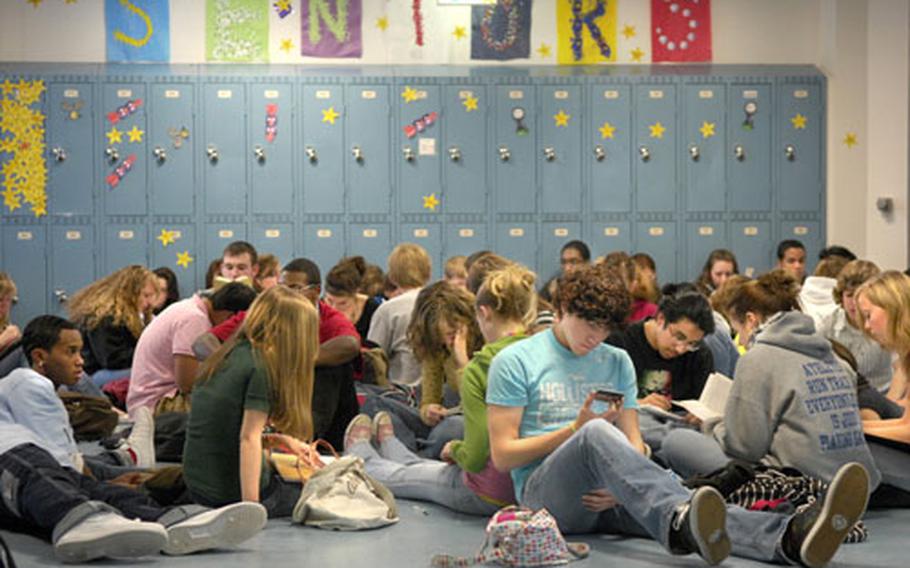 Around 140 seniors at Ramstein High School walked out of their classes Thursday and sat in the senior hallway to protest a school policy at Ramstein. (Ben Bloker / S&S)

RAMSTEIN AIR BASE, Germany &#8212; A group of 140 seniors at Ramstein High School proudly became student activists Thursday, staging a sit-in at the school to protest a new study hall policy.

Determined to change the way seminar classes are structured, student organizers said it was the only way to get their message across to administrators.

After a failed petition drive, &#8220;this was our last option,&#8221; said senior class president Jackson Knox, one of eight students who led the quiet demonstration, which involved about half of the senior class.

But the seniors contend that the single-grade seminars were more productive and, what&#8217;s more, worth fighting for. They said it&#8217;s easier to share notes and study with other students when everyone is in the same grade and taking similar, if not the same classes.

The protest involved students sitting in Ramstein&#8217;s &#8220;senior hall&#8221; as they did homework, chatted quietly and even signed in and out with student organizers to use the bathroom. Most did not walk out of class but instead met in the hall at the beginning of the period.

But Hatch said the seniors need to take their message to Ramstein&#8217;s School Advisory Committee &#8212; an avenue the students said they already took in September to no avail.

Hatch met with Knox, Curnutt and other organizers during the sit-in. For now, though, it seems the parties are at an impasse.

While Hatch isn&#8217;t budging, neither are the students, who said they&#8217;re planning another sit-in for Monday.

Disciplinary action against those who participated in the sit-in likely will be minimal because the administration was informed beforehand and students did their best to minimize the disruption of classes, Hatch said.