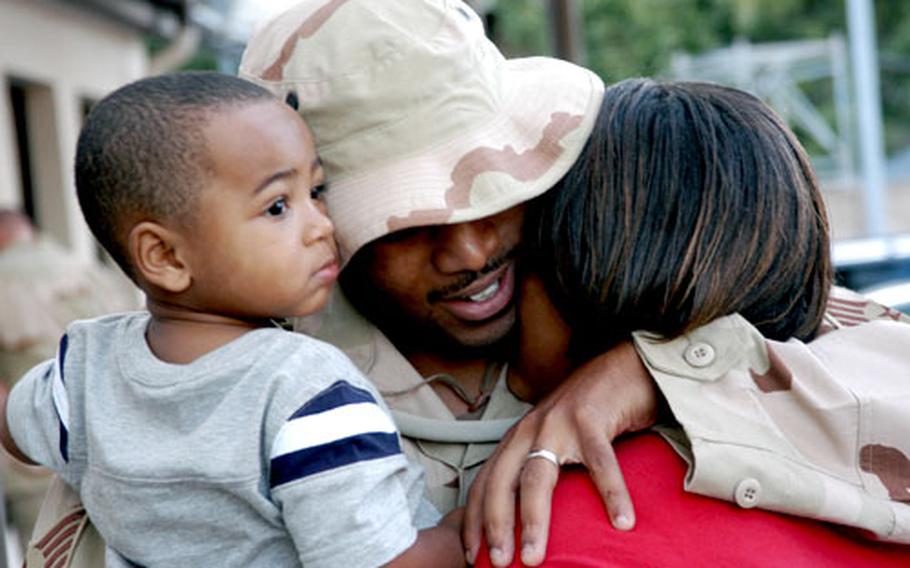 Staff Sgt. David Rogers of the 568th Security Forces Squadron gives his wife, Dria, a last hug before boarding a bus for Rhein-Main Air Base, Germany, and a flight to a downrange deployment Thursday night. Son David, 1, watches other airmen get on the bus. (Michael Abrams / S&S)

Staff Sgt. David Rogers of the 568th Security Forces Squadron gives his wife, Dria, a last hug before boarding a bus for Rhein-Main Air Base, Germany, and a flight to a downrange deployment Thursday night. Son David, 1, watches other airmen get on the bus. (Michael Abrams / S&S) Tech. Sgt. David Bailey of the Ramstein-based 568th Security Forces Squadron helps load baggage on to a truck Thursday night, as the squadron heads to Rhein-Main Air Base, Germany, and a downrange deployment. (Michael Abrams / S&S)

&#8220;I&#8217;m trying to explain to a 2-year-old where daddy is going,&#8221; Rogers said, as he held Little David for the last few minutes before leaving on a six-month deployment to the Middle East.

Rogers and about 40 other members of the squadron, who patrol the base, are heading downrange as part of Aerospace Expeditionary Forces 1 and 2. They&#8217;ll be pulling security at a desert base, but Air Force officials declined to specify their exact destination.

About 900 Ramstein airmen from various job specialties are part of the AEF rotation, a four-month tour for most troops.

Security forces members, however, generally deploy for six months because they are in such demand. Ramstein&#8217;s 569th U.S. Forces Police Squadron, which patrols the Kaiserslautern off-base community, also has been tapped for this AEF rotation.

Air Force police are getting used to the revolving door of deployments since Sept. 11, 2001, changed the face of security for the U.S. military everywhere.

&#8220;The culture has changed so much in the last four years that it has been ingrained in us,&#8221; said Begel, who has been on 14 short deployments around Central Asia and the Middle East in the last two years.

As in any shop, when the security forces go downrange, their squadrons at home have to do the same job with fewer people, Begel said.

At Ramstein, the busiest base in the Air Force, it means adding civilian German security forces members, and relying a great deal on German army troops who guard the base gates and perimeter, said Col. Gail Keefe, commander of the 435th Security Forces Group.

Senior Airman Jamie Heid couldn&#8217;t take his eyes off his newborn son, also named Jamie, as he waited for the bus.

His wife, Lori, was grateful their first child arrived in time to see off his dad. He was born only four days before.

Heid fed the teeny baby, and then held him to his shoulder. Heid will carry a photo album with pictures of Jamie, who will look a lot different when he comes home in February.