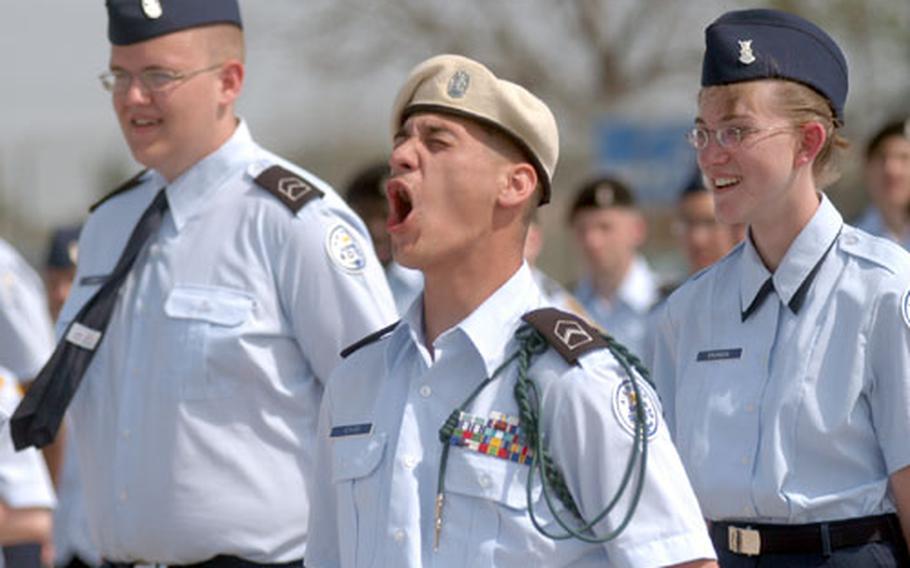 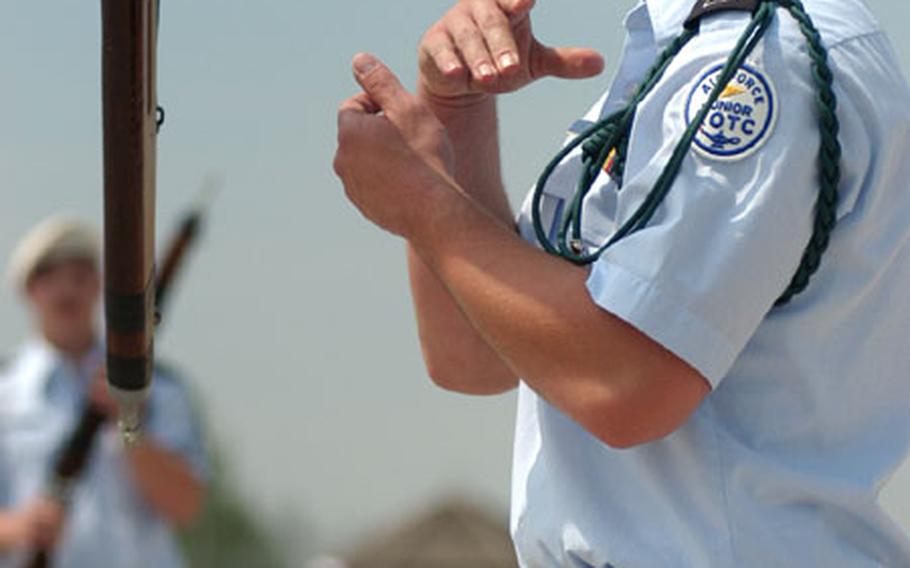 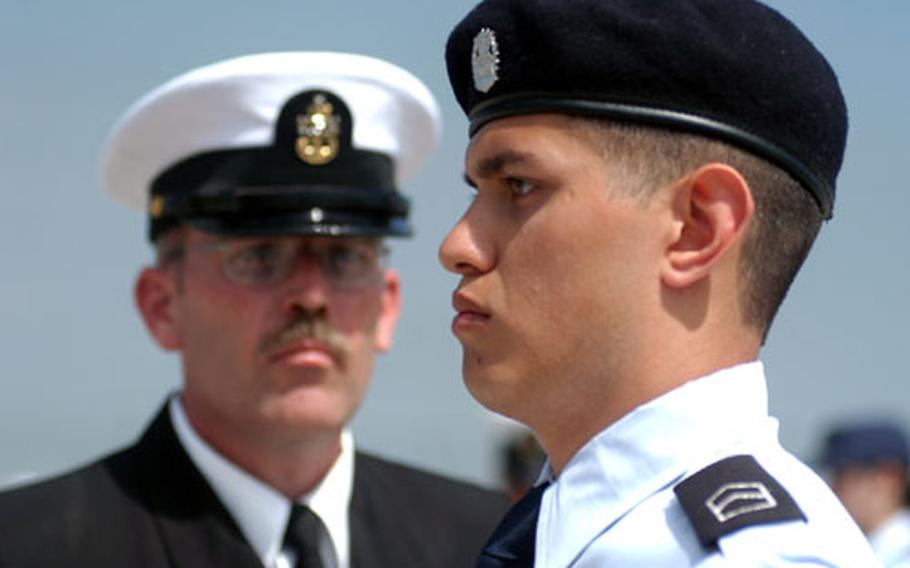 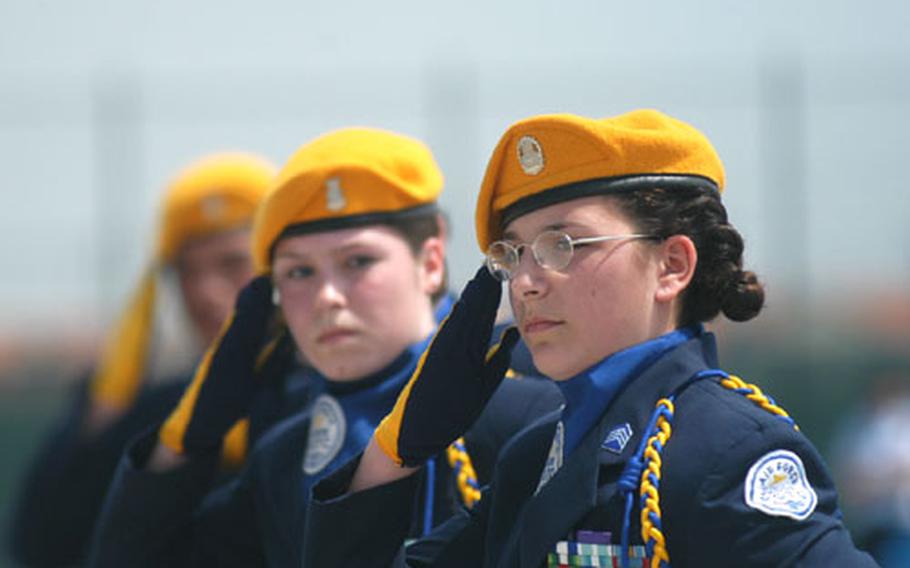 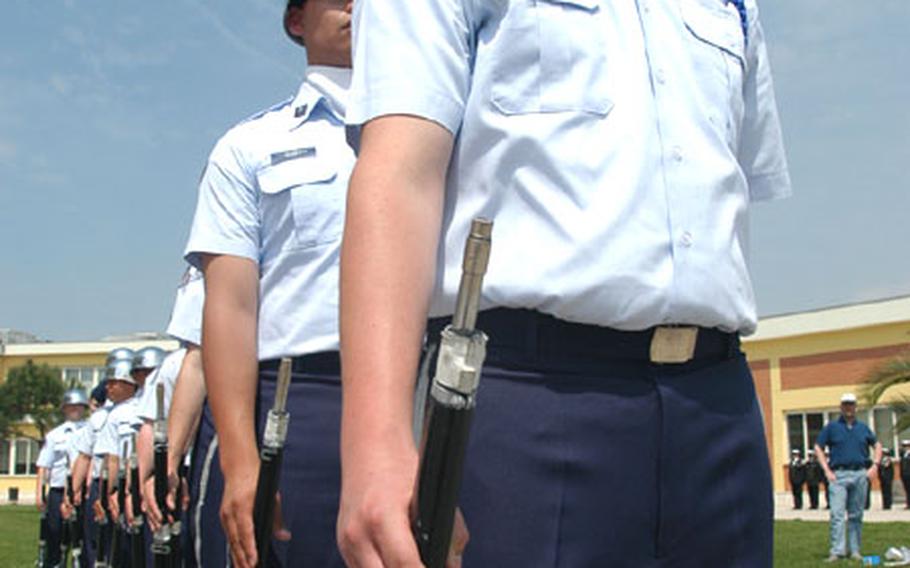 NAPLES, Italy &#8212; Cadet Maj. Adrian Martinez carefully walked up a staircase formed by rifles held by his teammates, rising steadily higher until he stood atop rifles balanced on the other cadets&#8217; shoulders.

The clicks of rifles hitting asphalt and yells from cadets sounding off lasted about six hours on the sunny afternoon, as about 150 students from nine Department of Defense Dependents Schools sweated out various drills, exhibitions and inspections.

The competition was the culmination of months of practice. Several students had been drilling a couple of hours a day since the fall for the event.

Participating teams came from Navy and Air Force JROTC teams at Ramstein, Kaiserslautern and Gen. H.H. Arnold in Wiesbaden, all in Germany; Naples, Aviano and Sigonella high schools in Italy; and Lakenheath, Alconbury and London Central in England.

For many, the competition started with a lengthy journey. For Wiesbaden, it was a 20-hour bus trip.

Several parents made the trip, too, and for some, just getting there was a challenge.

Angie Peters, mother of Shannon Peters, a member of the Ramstein team, took a military hop from Ramstein. It took her two days to reach Naples, with stops in Aviano, Sigonella and Sardinia.

Once the competition began, the cadets were all business. Among them were a brother team of Cadet Maj. Steve Gerard and 1st Lt. Tommy Gerard, who flipped rifles in the duo armed exhibition. The 19-year-old Alconbury High School seniors from Jacksonville, Fla., plan to join the Navy and Navy Reserves after graduation.

Steve Gerard said JROTC got him from running with a bad group of friends.

The final competition was the individual drill routine, similar to &#8220;Simon Says.&#8221;

All the cadets stood in formation and followed commands. Judges walked the rows, carefully scrutinizing the students&#8217; crisp turns, salutes and heel clicks.

They tapped out the cadets until the only person left standing was 2nd Lt. David Vega, 17, an Aviano senior from San Antonio.

Afterward, while receiving congratulations, he was still pumped up &#8212; and relieved.

One of the judges for the day was Navy Petty Officer 1st Class Cruz Perez, 35, a cryptologic technician at Allied Forces South in Naples. He volunteered for the duty because he&#8217;d never seen a JROTC competition before.

Winners for the 2003 All-European Drill Competition: