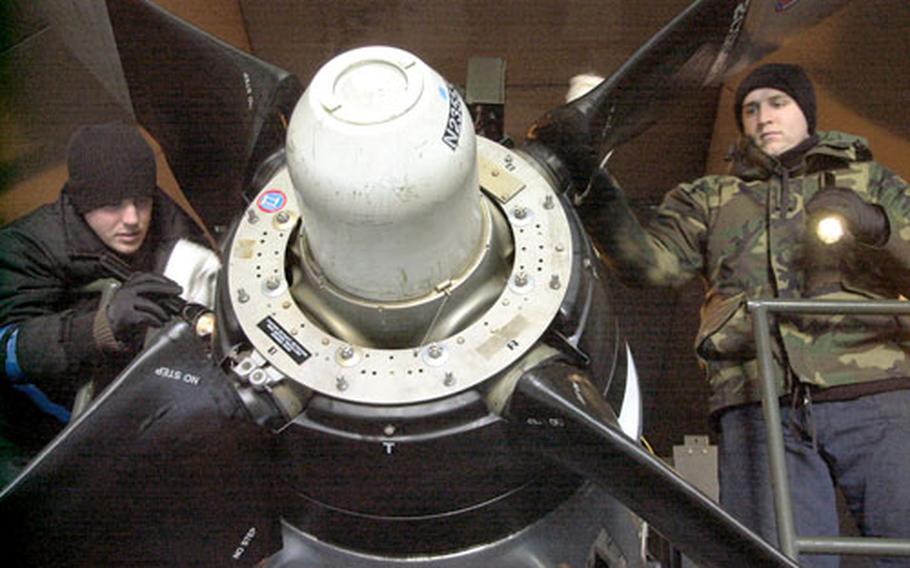 Airmen at Ramstein Air Base in Germany work on a C-130 prop engine inside the base’s “Hush House.” The facility allows aircraft mechanics to test engines at any time of the day because the building’s insulation reduces noise to the outside. (Scott Schonauer / S&S)

Airmen at Ramstein Air Base in Germany work on a C-130 prop engine inside the base’s “Hush House.” The facility allows aircraft mechanics to test engines at any time of the day because the building’s insulation reduces noise to the outside. (Scott Schonauer / S&S) 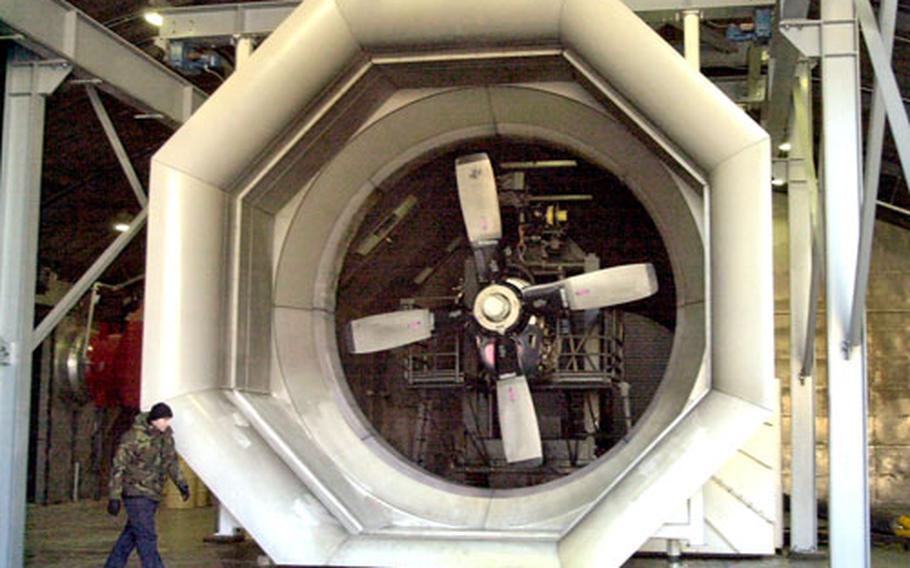 While the indoor propeller-engine testing facility is quiet on the outside, the noise is deafening on the inside.

And that&#8217;s exactly how engineers designed it.

The insulated, noise-reducing facility &#8212; converted from a jet-engine testing facility between Ramstein Air Base&#8217;s runway and ramp &#8212; allows airmen to test C-130 propellers at any time of the day without upsetting German villagers within earshot of the flight line.

The 86th Propulsion Flight opened the building last summer as the Air Force&#8217;s first indoor test facility for the T-56, or prop engine. Many bases have similar facilities for jet engines, but squadrons have always tested the earsplitting prop engines outside.

The building cost $2.2 million, according to the Air Force, and has allowed the 86th Maintenance Squadron to double its engine testing capability without violating Germany&#8217;s stringent &#8220;quiet hours.&#8221;

German noise regulations allow the base to run engines only during daylight working hours. But the &#8220;Hush House&#8221; allows mechanics to test a single engine day or night and in any weather.

&#8220;We have the ability to change props anytime,&#8221; said Staff Sgt. Gregory Mathes, an aerospace prop craftsman with the 86th.

That&#8217;s important because the maintenance squadron fixes engines from Iraq and Afghanistan in addition to those that break down in Europe.

Although a group of residents west of the base has complained of noise from planes, they can&#8217;t hear the sound of a prop turning at full speed inside. While a turning engine inside the facility is incredibly loud, outside it&#8217;s not much louder than a power tool.

It takes about an hour for airmen to load an engine into a large compartment that looks like a big funnel. The front of the structure, nicknamed the &#8220;dog house,&#8221; looks like an MRI machine for King Kong. The dog house allows for air flow and what makes this facility different than indoor jet testing facilities.

When the engine is ready to run, mechanics go into a control booth. They can monitor the performance of the engine using computer diagnostic equipment and cameras set up throughout the facility. A joystick-like device acts as the throttle.