Ramstein rotator flight schedule to remain the same through fall 2010 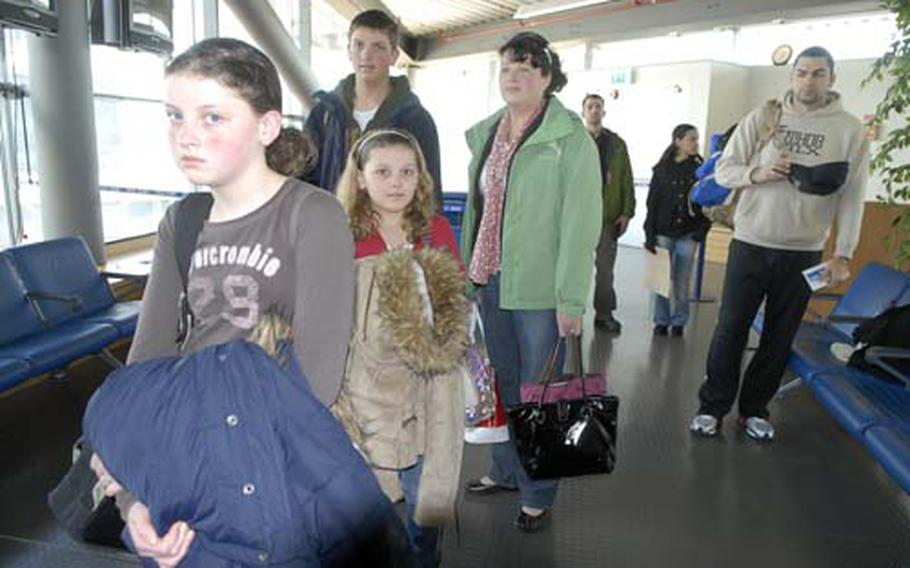 Space-available travelers from Aviano, Lee family members wait in line recently to go through a security check before boarding a flight from Ramstein Air Base, Germany, to Dover Air Force Base in Delaware. (Jennifer H. Svan / S&S)

Servicemembers living near Ramstein Air Base in Germany and Lajes Field in the Azores will continue to have the greatest access to the military&#8217;s weekly Patriot Express rotator flights through at least the fall of next year.

In a recent e-mail, the Air Mobility Command said the six routes that currently make stops in Europe &#8212; as well as two that fly between the States and the Pacific &#8212; will remain the same through fiscal 2010.

Of the six Europe routes, three stop in Ramstein and three stops in Lajes.

The rotator flights consist of leased commercial jets that transport troops on orders as well as qualified "space available" passengers. Space-A passengers can use the service to travel to and from the States as well as within a theater, on occasion. Space-A travel is prohibited to Southwest Asia destinations.

"It&#8217;s a great savings, a great opportunity to go to other places," said Amanda Lee, an Air Force spouse from Aviano Air Base in northern Italy.

Lee was traveling by Space-A through Ramstein recently with her three children. Trying to get to the States because of a death in the family, the Lees had encountered a few hiccups in their journey. They had missed the military rotator flight from Aviano, so they traveled by commercial air to Frankfurt, Germany, and from there made their way to Ramstein. They were on an early morning flight out of Ramstein to Dover, but the plane had to turn around because of mechanical problems, passengers were told. They were able to catch another C-5 later that day.

Though bleary-eyed from the long day, Lee had no complaints.

"You just have to understand what you&#8217;re in for" when traveling Space-A, she said. "It&#8217;s usually much more seamless, but you will eventually run into some kind of delay. I think people should take advantage of it."

Travelers in the Pacific will have more opportunity to travel Space-A beginning April 1, when Iwakuni, Japan, is added to the route that starts and ends in Seattle. That route also includes stops in Yokota and Kadena.

Space-A passengers can also take advantage of seats on military cargo aircraft if space is available. AMC said there were almost 61,000 Space-A passengers during the first six months of last year and almost 179,000 for all of 2007.

The heaviest traveled Space-A route involves the service between Travis Air Force Base in California and Hickham Air Force Base in Hawaii. That&#8217;s followed by the Ramstein-to-Baltimore stretch, and to and fro between Hickham and Guam. The stretch between Dover Air Force Base to Ramstein rounds out the top 5.