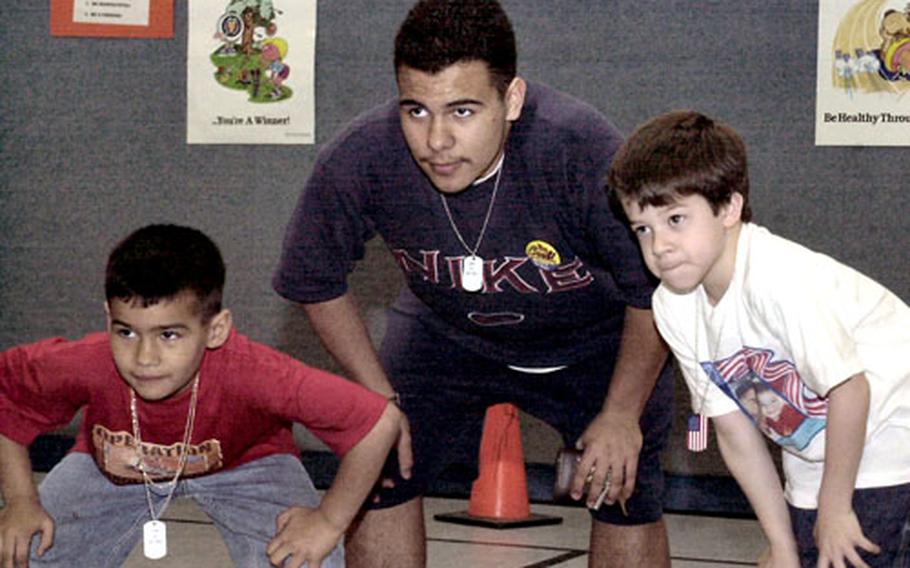 RAMSTEIN AIR BASE, Germany &#8212; You might think a bunch of MTV-watching high school students have little in common with a group of Nickelodeon-loving elementary pupils.

But in a military community during a time of war, children of all ages often are linked by one thing: a parent deployed.

That&#8217;s part of the reason why students such as freshman Adrian Emmett take time every month to hang out with younger children.

A school program called &#8220;Deployment Buddies&#8221; brings high school and elementary pupils of deployed parents together to share experiences and just have fun. Last year, Emmett&#8217;s father deployed to Iraq with the Army.

He and up to 35 high school students feel they have been able to help the elementary pupils.

Both groups, although separated by as many as 12 years in age, sometimes have a difficult time dealing with the separation from a mother or father off to war for up to 12 months or longer.

Maryann Porter, a counselor for 11th- and 12th-grade students at Ramstein High School, said the high school kids, in some cases, offer the best help because they know exactly what the younger children are going through.

The program was started this school year and was developed by counselors at the elementary and high schools in the area. It grew out of concerns about the high number of parents deploying.

Children deal with the separation differently. Some who struggle with their mother or father being gone see their grades drop. A few exhibit behavior problems in the classroom.

During last month&#8217;s session, the groups met at the Ramstein Elementary School cafeteria for about an hour. They wrote postcards to their deployed parents, played games in the gym and shared a bag of snacks.

Katrina Castillo, 18, a senior at Ramstein who will attend the University of Tampa in Florida this fall, paired up with a girl in kindergarten and another in second grade. She said the elementary pupils need to see that they&#8217;re not the only ones who have a tough time with mom or dad being gone &#8212; even the &#8220;big kids&#8221; grapple with it. Counselors believe high school and elementary children mutually benefit from the get-togethers.

&#8220;I think some of them just being able to write something to their dads and moms, being able to talk to somebody else who is older than them who has parents deployed or parents about to deploy, I think that shows them that they&#8217;re not the only people this happens to,&#8221; Castillo said.