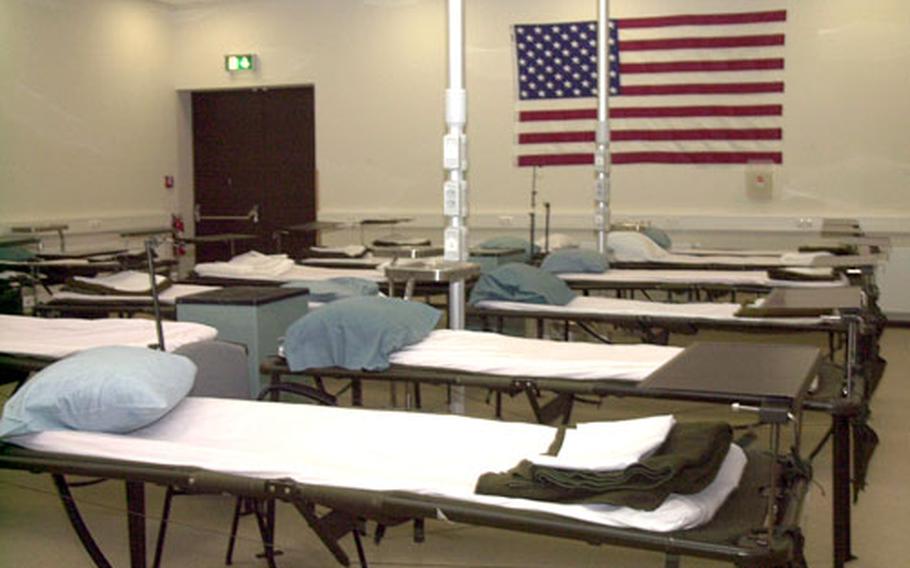 RAMSTEIN AIR BASE, Germany &#8212; The Air Force officially opened a permanent staging area at Ramstein for wounded troops waiting for flights to hospitals across the United States.

The $1.6 million Contingency Aeromedical Staging Facility replaces a temporary building built about two years ago and will be able to handle more than 100 patients at a time &#8212; many of them from Iraq and Afghanistan.

&#8220;Before, the patients were all one patient after another, right on top of another, and now we can actually separate them a little better in the bays. Just about every aspect of this building is better than the other facility.&#8221;

The facility will continue to be the biggest and busiest of its kind in the Air Force and is much like an air terminal for patients waiting for flights. Passengers must have their baggage checked and are screened before heading to a plane bound for hospitals across the U.S.

Although the base has always had a small holding area for patients traveling to and from Europe, base officials said the wars in Iraq and Afghanistan created a need for a larger place.

In the last three years, the facility has seen more than 31,600 soldiers, sailors, airmen and Marines, said Capt. Robert Peltzer, the facility&#8217;s deployed troop coordinator. In addition to those injured in Afghanistan and Iraq, the staff also helps move patients stationed in Europe.

The 26,000-square-foot complex is a major improvement over the gymnasium that the base used three years ago when the war in Iraq started. Staff members used the gym before moving into the temporary modular complex.

The new building opened before Christmas, but base officials christened the facility Friday with a ceremony inside one of the bays.

The building includes showers built especially for the patients, a pharmacy, male and female wards and a United Service Organizations office that is open around the clock.

&#8220;From the injured troops&#8217; perspective, this is more comfortable, affords them more privacy and the restrooms are more convenient for them,&#8221; said Col. Bill Nelson, commander of the 435th Aeromedical Squadron.