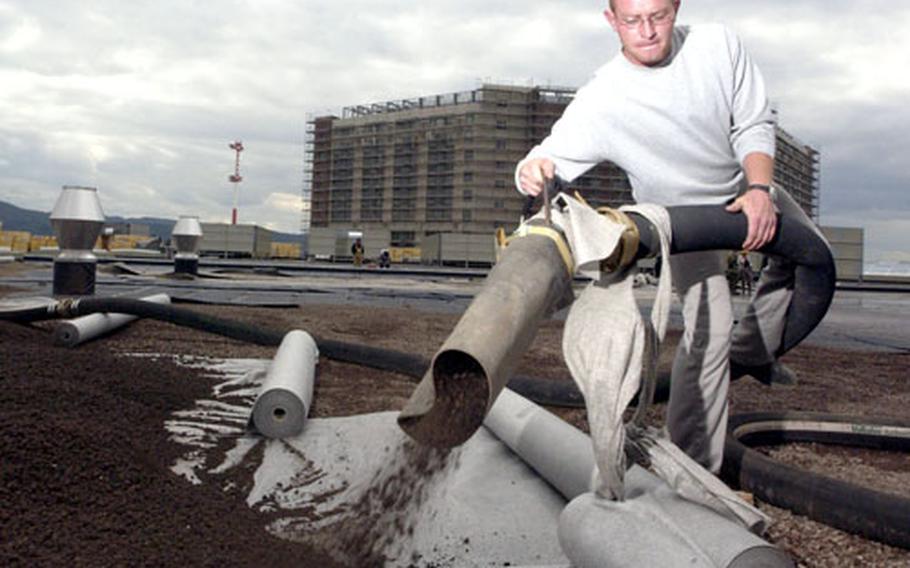 Pedestrians walk past the troubled Kaiserslautern Military Community Center project Thursday before the start of a ceremony dubbing Ramstein Air Base the new “Gateway to Europe.” (Ben Bloker / S&S)

RAMSTEIN AIR BASE, Germany &#8212; Construction of Ramstein&#8217;s $200 million mall and hotel complex has faced management problems, and officials predict it will open more than two years later than originally planned and cost millions of dollars more than contracted.

The project, described as the Pentagon&#8217;s largest in the world, is on pace to cost 20 percent more than originally contracted due to the delays and a cavalcade of problems, Air Force project managers revealed in interviews last week.

Serious design problems and delays have halted work on some portions of the building and required numerous trips back to the drawing board. A lack of coordination among the 36 contractors has led to miscommunication and bitter disputes.

The roof over the complex, called the Kaiserslautern Military Community Center, leaks and some parts will have to be torn up and redone, said Capt. Andrew Sheehan, the 435th Civil Engineering Squadron&#8217;s KMCC project manager.

To make matters worse, the roofing company is now bankrupt, which means it leaves behind a mess it is no longer obligated to repair.

Landesbetrieb Liegenschafts und Baubetreuung, or LBB &#8212; a construction management and contracting agency of the state of Rhineland-Palatinate equivalent to the U.S. Army Corps of Engineers &#8212; oversees the project.

The U.S. Air Force has its own team of engineers for the project, paid for by U.S. and German funds.

The delay is disappointing news for those eager to visit what military officials say will be one of the largest and best U.S. military shopping and hotel complexes.

Project managers hope the hotel will greet its first guests sometime before Christmas. But the shopping center might not open until a year from now. Officials are reluctant to pinpoint the exact month.

When German state politicians and military commanders gathered last week to dedicate a monument officially anointing Ramstein as &#8220;The Gateway to Europe,&#8221; the yet-to-be-finished mall and hotel loomed behind them.

Rhineland-Palatinate state Minister of Finance Ingolf Deubel acknowledged the project along with others on the base had &#8220;stretched our capacities to their limits&#8221; and the complex had not gone as planned.

&#8220;In some cases, differences cannot be avoided, as unfortunately currently has happened with the construction of the new KMCC shopping mall,&#8221; Deubel said.

The project was originally supposed to open in late 2005. Base officials cited poor weather, the lack of a prime contractor and vandalism for last year&#8217;s delay.

Investigators are still trying to find who broke into the hotel and rolled acrylic paint onto 240 of the rooms a year ago, causing $410,000 in damage.

But more troubles have also emerged.

Faulty designs and the lack of a prime contractor also contributed to the delay, adding confusion to the work site.

LBB urged the Air Force to &#8220;spread the wealth&#8221; among smaller and mid-sized contractors in the region.

Last September, LBB fired the German firm hired to manage the various companies due to the lack of coordination.

Planners put construction of the facility on the fast track using a design-as-you-go type of approach. For it to work, designers must keep up a strict timeline. The German design companies didn&#8217;t.

That left contractors with nothing to do but wait.

When the designs did arrive, many times they were wrong, Sheehan said. Ceiling heights for some stores didn&#8217;t match, the food court counters were in the wrong spot and the foundation for the escalator was a meter off the mark.

To help with quality assurance and avoid future problems, the Air Force has doubled its portion of the project team to 17 staff members.

The largest problem the team now faces is the leaking roof left by the bankrupt contractor.

The roof was supposed to be one-of-a-kind and environmentally friendly. Workers spread soil and crushed rock across the 400,000-square-foot roof so that they could grow grass and plants. Base officials said the &#8220;green roof&#8221; would retain water better and help slash energy costs, but Sheehan and Waterman said the contractor didn&#8217;t install it correctly.

German and American engineers know the roof is in bad shape, but they don&#8217;t know exactly how bad. They hired a firm to look at it and see what needs to be done. Results of the study won&#8217;t be ready for another two months.

At this point, things don&#8217;t look good. Pumps are being used to suck out the water that has saturated the insulation. Leaks have created standing water inside and ruined some parts of the interior.

Air Force project managers noticed the problems in July, and Sheehan and Waterman said LBB wrote numerous letters to the contractor about the concerns. But nothing happened. &#8220;We raised the alarm and it wasn&#8217;t heeded and it should have been,&#8221; Waterman said.

The delays have done more than create cost overruns and shatter hopes of Christmas shopping at the new mall this year. The hotel trained 28 workers in anticipation of the inn opening this year. That left a group of employees ready to accept their first customers without a place to put them.

Despite the problems, Sheehan said the center would be a great place to stay and shop for people who live in the area and those traveling through the base.

&#8220;Our community is anxiously awaiting, and I&#8217;m equally as frustrated as every other member of the community that it&#8217;s not progressing as scheduled and I work every day to push it a little faster,&#8221; he said.