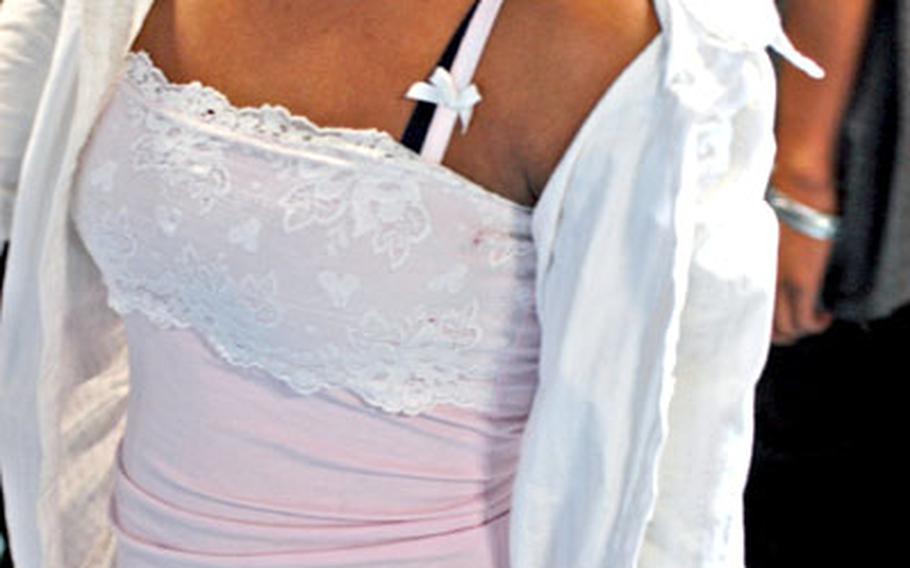 Ramstein High School will start making students who wear shirts like this — with spaghetti straps — cover them with baggy T-shirts. Boys who wear baggy pants will be made to wear suspenders. (Russ Rizzo / S&S)

RAMSTEIN AIR BASE, Germany &#8212; Teachers at Ramstein High School may reach a whole new level of &#8220;uncool&#8221; in the eyes of students when the suspenders and jumbo T-shirts come out.

To counter teen fashion trends they deem unfit for class, teachers will begin slapping suspenders on boys with pants that hang too low and large T-shirts on girls who show off too much skin.

Principal Barbara Ferg-Carter special-ordered the new fashion adjusters, which will read: &#8220;I support Ramstein High School&#8217;s dress code.&#8221; They have not arrived yet.

The new approach to enforcing dress norms is part of a larger effort by Ferg-Carter to counteract a growing problem in her school: Students are more disrespectful than ever before, she said.

Ferg-Carter is alarmed by bad language that echoes through school hallways, stories of students mouthing off to adults and incidents of theft that have become more common recently, she said.

In years past, teachers were lenient with students who used bad language, Ferg-Carter said.

Parents so far have supported Ferg-Carter in her efforts, she said. Colleen Paige, who has two children attending Ramstein High School, pulled the principal aside after a town hall meeting Thursday to thank her for her efforts.

But some students are less appreciative. Students interviewed during lunchtime Thursday said stricter rules are simply compounding the problem.

Students this year are no longer allowed to listen to CD players during lunch &#8212; a privilege some students said helped keep the halls quiet and calm. Ferg-Carter said the faculty is reconsidering the ban.

Department of Defense schools in Europe also banned smoking sections at all of its schools this year, a point of friction for some students interviewed Thursday.

And with word coming of the T-shirts for girls showing off too much skin and suspenders for boys with sagging pants, some students are already contemplating rebellion.