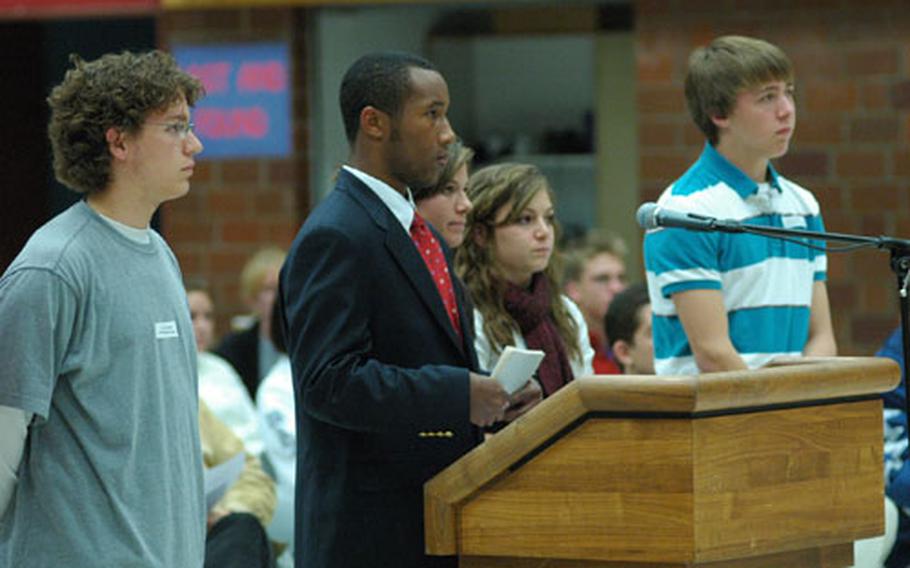 After an outcry from students, parents and a few teachers, Ramstein High School Principal Greg Hatch said Tuesday that he will change the school&#8217;s new study-hall policy.

The tension between the school&#8217;s senior class and Hatch has been almost palpable after a senior sit-in last week aimed at changing the study halls, or seminar classes, back to the single-grade configuration of years past.

The situation reached critical mass when a group of parents and teachers defended the students&#8217; plight to Hatch and members of the School Advisory Council on Monday afternoon.

Some criticized Hatch&#8217;s handling of the situation. Most agreed that seminars are more productive when students can easily meet with others in the same grade who are taking similar classes.

A few students, teachers and parents spoke out in favor of the new policy but were clearly the minority voice at the public meeting on Monday afternoon.

It was at a private meeting later that night where a compromise was worked out by Hatch and the SAC &#8212; a group of parents, faculty and one student.

Instead of merging students from all four grades, half the seminar classes will combine ninth- and 10th-graders, the other half 11th- and 12th-graders, Hatch said.

Seminar classes are mandatory at all high schools within the Department of Defense Dependents Schools-Europe system.

They allow students to catch up on course work, meet with teachers or study with other students. A handful of the 70-plus seminars at Ramstein focus on special topics, such as the Model United Nations.

Concern about students&#8217; limited access to other teachers for help during seminar classes would also be addressed so they &#8220;can get the help they need when they need it,&#8221; Hatch said.

Hatch announced the new seminar configuration at a meeting of the school&#8217;s department heads Tuesday afternoon and said parents should receive a letter explaining the changes within a few days. He said he did not plan to address students directly regarding the compromise.

Most students close to the cause had not heard the news Tuesday afternoon.

Senior Hayley DeGraff, the lone student on the SAC, was the exception. She attended the group&#8217;s closed-door meeting Monday night that led to Hatch&#8217;s decision to change the seminar classes.