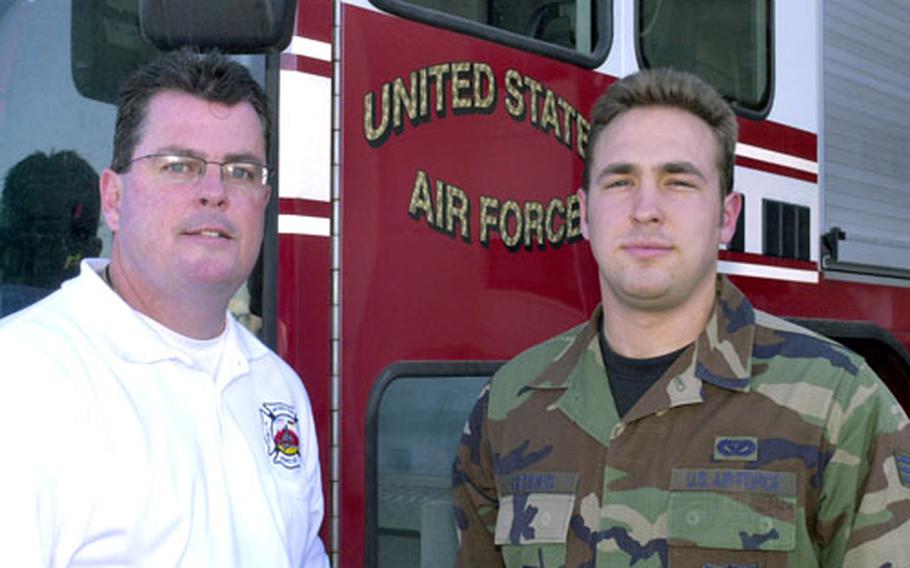 It also can boast that it has some of the military&#8217;s best firefighters.

This year, the fire department earned three of the four top Air Force awards for the best civilian and military firefighters.

Senior Airman Christopher Gerdes went a step farther, receiving the Department of Defense Military Firefighter of the Year Award a month ago after earning the Air Force title.

In his brief Air Force career as a firefighter, Gerdes helped save three people from a major car accident, rescued a construction worker with a severed arm and leg on the fourth floor, provided emergency care to a child who fell four stories and assisted with a woman who gave birth in a car.

He also volunteers to serve on the base honor guard, helps teach hundreds of students fire safety and helped improve the department&#8217;s training program. U.S. Air Forces in Europe named him its Airman of the Year last spring before he won military firefighter of the year for 2005.

Paul Erickson, the assistant chief of operations, received the award for the top civilian fire officer of the year for the Air Force. Erickson helps oversee more than 250 civilian and military firefighters at eight stations in the Kaiserslautern area.

The department is the largest in the Air Force, Erickson said. Firefighters in the area respond to around 4,000 calls a year.

Master Sgt. Scott Knupp, who transferred to Hill Air Force Base, earned the title of top fire officer of the year.

Airman 1st Class Alston Calderon will try to keep the top awards within the unit. He recently was named USAFE top firefighter for 2006 and will compete next year for the top Air Force firefighter award.