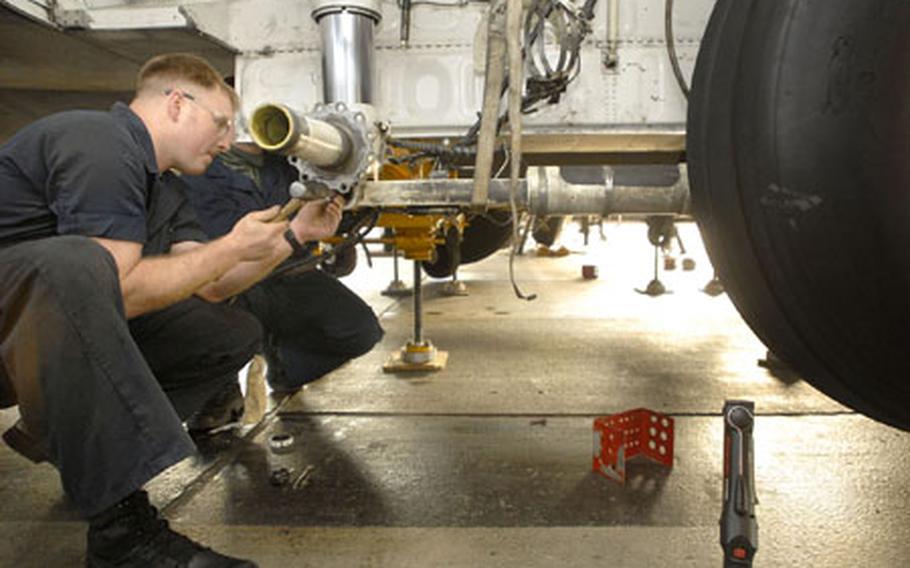 Staff Sgt. Donald Morris, a crew chief assigned to the 86th Aircraft Maintenance Squadron Aero Repair shop, disassembles a C-130’s rear landing gear in preparation for structural repair Thursday at Ramstein Air Base. The aging fleet is suffering from various types of cracks, wiring problems and other issues inherent to 30-year-old aircraft. The 86th Airlift Wing is due to receive the new C-130 “J” model in 2009. (Ben Bloker / S&S)

Staff Sgt. Donald Morris, a crew chief assigned to the 86th Aircraft Maintenance Squadron Aero Repair shop, disassembles a C-130’s rear landing gear in preparation for structural repair Thursday at Ramstein Air Base. The aging fleet is suffering from various types of cracks, wiring problems and other issues inherent to 30-year-old aircraft. The 86th Airlift Wing is due to receive the new C-130 “J” model in 2009. (Ben Bloker / S&S) 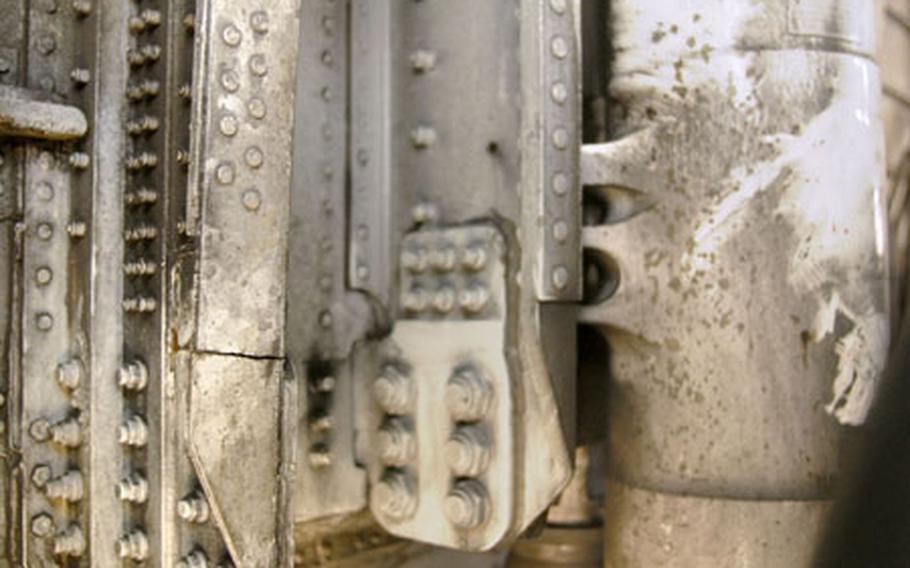 Crew chiefs from the 86th Aircraft Maintenance Squadron found this 5-inch crack near a landing gear strut on one of its C-130s during an inspection Tuesday at Ramstein Air Base, Germany. (Ben Bloker / S&S) 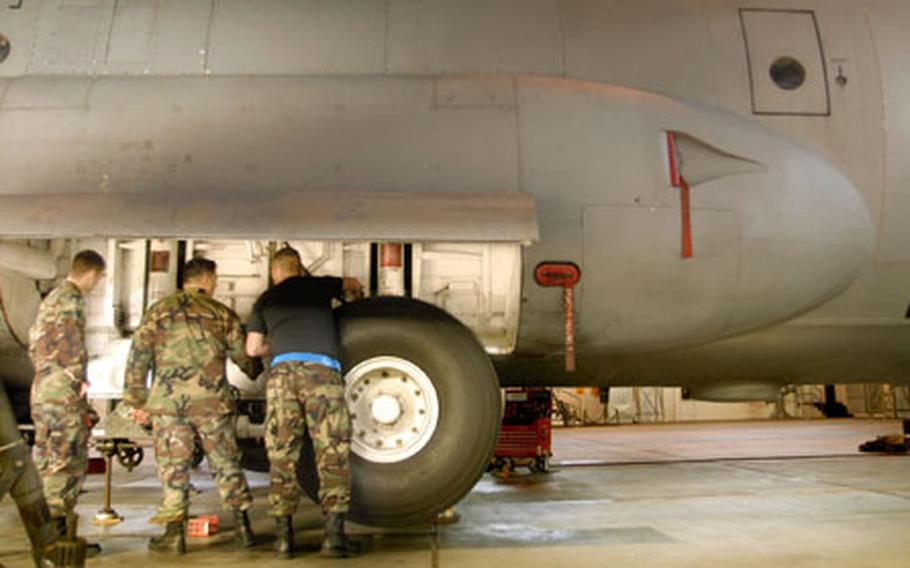 The C-130E Hercules parked on the tarmac away from the other cargo planes is so beyond repair it hasn&#8217;t flown in more than three years. The Air Force plans to retire the propeller plane sometime this year and fly it to its final resting place at an aircraft graveyard in Arizona.

That is, of course, if it can fly.

Airmen like to call such planes &#8220;hangar queens,&#8221; because they spend so much time under repair.

The other planes in the wing are not nearly as bad, but they are edging close. Mechanics with the 86th Maintenance Group said they are struggling to keep the service&#8217;s fleet of aging C-130Es flying.

Many of the planes are nearly twice the age of those maintaining them. The average age of Ramstein&#8217;s fleet of C-130E aircraft is 43 years old. The youngest mechanics with the 86th Maintenance Group are barely 20.

The wars in Iraq and Afghanistan are adding to the parts and maintenance woes. The four-engine C-130 has been a workhorse in both countries, delivering troops, food, ammunition and other supplies to units. On average, deployed planes are flown three times as much as those in Germany and the conditions are rougher. Some planes have come back with bullet holes.

The Air Force is rolling out a replacement for the old planes. The C-130J &#8220;Super Hercules&#8221; is faster, flies farther and is billed as being more maintenance friendly. But the first plane isn&#8217;t expected to arrive at Ramstein until sometime in 2009.

On Thursday, only one of the wing&#8217;s nine planes at Ramstein was considered able to fly a mission. The rest were under repair or have so many flight hours the wing has limited them to basic, low-impact training missions.

The planes they do have are breaking at a staggering pace.

Brittle wires have snapped and decades-old actuators have sprung hydraulic leaks. Mechanics have discovered numerous cracks &#8212; some as long as 20 inches &#8212; in major parts of the airframe.

To keep the planes flying, they are literally patching them up. Airmen have used specially cut pieces of composite metal to strengthen components with small cracks.

Mechanics patched up one plane this month just so they could move it into the hangar. Some cracks and signs of corrosion are tiny, only a few inches long, but such faults could be deadly on a plane designed to haul as much as 42,000 pounds &#8212; the equivalent of a dozen Ford Mustangs.

Airmen have been working as much as 20 hours a week in overtime to fix the planes so they can fly. But personnel shortages in the shop have put pressure on younger, less-experienced airmen such as Senior Airman Arron Jenkins, an electrical and environmental specialist.

&#8220;We&#8217;re spread very, very thin,&#8221; Jenkins said. &#8220;We constantly have people downrange. And then you take into account everything that is standard military lifestyle &#8212; different training, all that stuff. We&#8217;re left a very, very limited number of people that are actually capable of going out and working on aircraft.&#8221;

It is not unusual for planes so old to break down, but many mechanics are discovering new problems that even experienced maintainers have never seen in their career.

Many of the airmen are worried about keeping up with the breakneck pace as the Air Force looks to trim between 30 and 40 maintainers from the unit as the service tries to modernize the fleet. In the meantime, they said they would continue to do their jobs no matter how hard it gets. Despite the challenges, mechanics said it is rewarding to fix the planes so they can support missions.