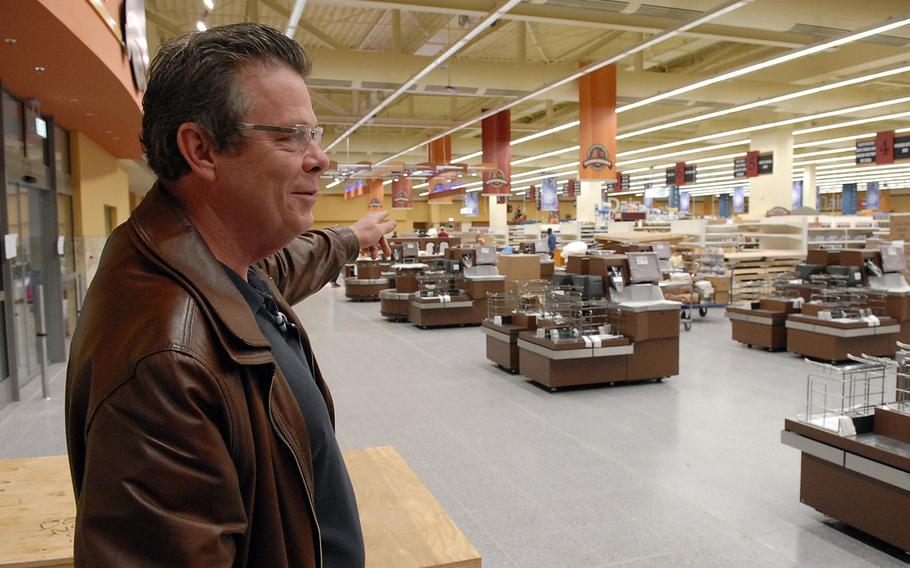 Buy Photo
Harry Nichols Jr., the Ramstein commissary director, points to a line of new registers in the remodeled and expanded store on Ramstein Air Base, Germany. The renovated facility is scheduled to open Nov. 15. (Jennifer Svan/Stars and Stripes)

Buy Photo
Harry Nichols Jr., the Ramstein commissary director, points to a line of new registers in the remodeled and expanded store on Ramstein Air Base, Germany. The renovated facility is scheduled to open Nov. 15. (Jennifer Svan/Stars and Stripes) 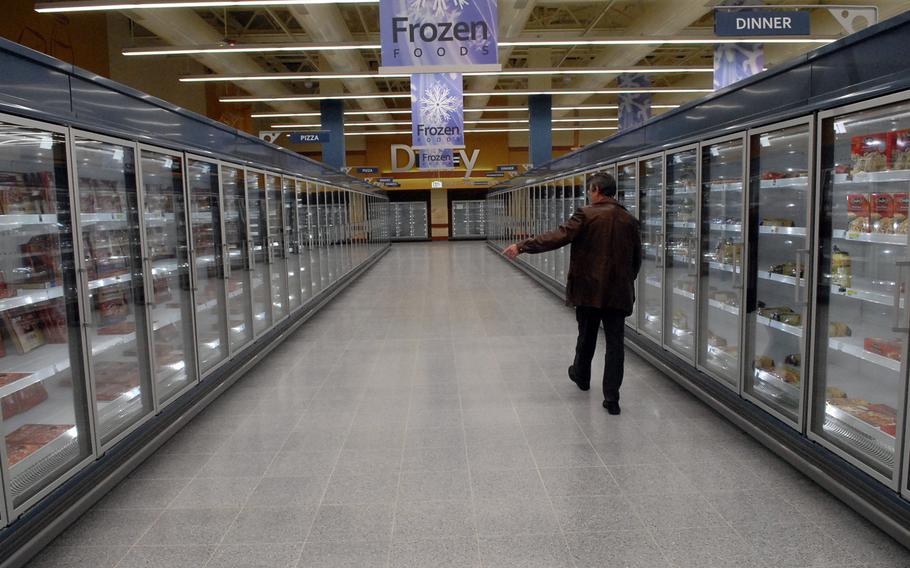 Buy Photo
The renovated Ramstein Commissary has an expanded frozen foods section and wider aisles, among other features. Harry Nichols, the store's director, shows off the space where shelves are already stacked with frozen pizza and other items. (Jennifer Svan/Stars and Stripes) 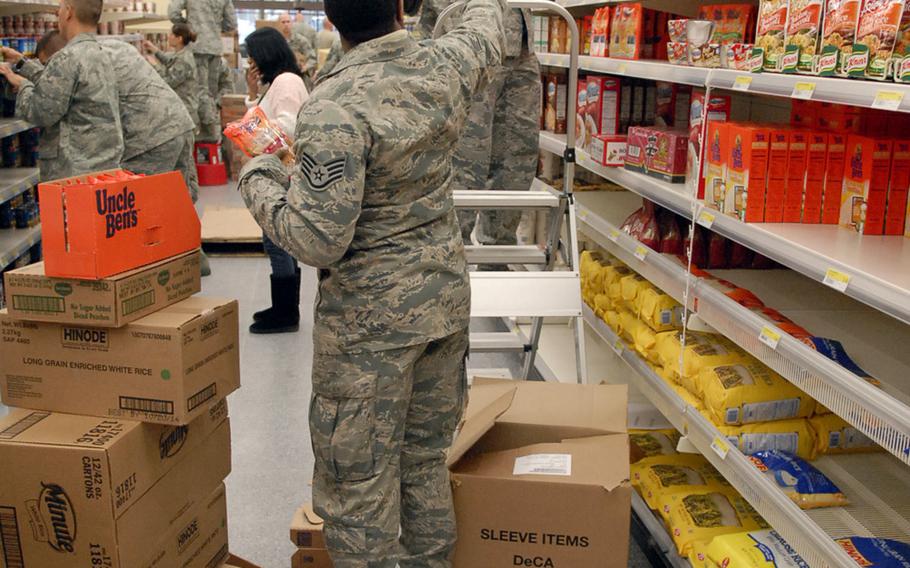 The remodeled store includes spacious aisles and a sales floor expanded by about 25 percent, with 13 regular checkout lines and 12 self-checkout lines — for a total of six more registers.

The new store will open at 7:30 a.m. for early-bird shopping, following a four-day store closure starting on Nov. 11. Workers need time to stock the shelves and get the new store ready for customers, said Harry Nichols Jr., Ramstein commissary director.

The Vogelweh and Sembach commissaries will be open during the closure and are expecting an increase in business, according to store officials.

The Ramstein commissary’s sales floor will grow by about 12,500 square feet — or about one-quarter of a football field. But despite the added floor and shelf space, don’t expect a super-size commissary brimming with a selection rivaling stateside mega-stores. The commissary’s product variety will remain the same, it will just carry more of the same products, Nichols said.

“We shouldn’t run out of pizza,” he said, while standing in the new frozen food section, where frozen pizza boxes were already stacked on 23 shelves behind five glass doors.

Ramstein, like the other commissaries in Europe, goes by the European stock assortment list. The smaller size of stores overseas and the high cost of transportation limit that list to about 12,000 different line items, Nichols said.

The old store had the room to carry a full assortment, Nichols said, though space was tight. The new store has room for more items but won’t expand its assortment because it’s too expensive to bring items to Europe just for Ramstein, he said.

The new store features revamped and extensive departments for produce, meat and groceries, with an expanded frozen section; an international delicatessen and bakery; fresh sandwiches to go; rotisserie chicken; a salad bar and a new customer service desk and tobacco kiosk. It also has upgraded refrigeration, lighting and climate control systems and more storage space.

In total, the new store is 121,772 square feet — slightly less than three acres.

Ramstein averages 3,500 customers a day and about $5.5 million in monthly sales, making it the busiest overseas commissary, according to Nichols. The Pearl Harbor commissary is the Defense Commissary Agency’s busiest worldwide, followed by the store at Naval Base San Diego.

Work to remodel the commissary began in 2010. A new contractor was brought in after the original one defaulted, Nichols said, delaying the project by about six months.

The store’s parking lot, with more spaces, is expected to be finished by mid-January, depending on weather, Nichols said.

Most of the store has been housed in a temporary 20,000-square foot “tent” for the last year during remodeling. That facility will begin to come down on Nov. 18, Nichols said, freeing up more parking then.