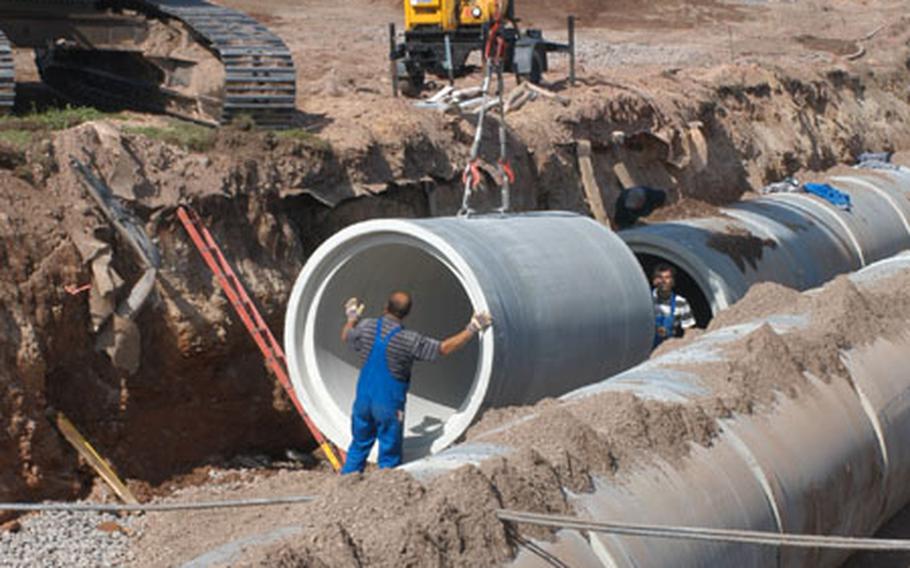 Workers lay drainage pipe at the west end of Ramstein Air Base&#39;s runway in a 15-foot trench Air Force officials called "the big ditch." The ditch is part of a $2 million project to repair the runway. (Marni McEntee / S&S)

RAMSTEIN AIR BASE, Germany &#8212; The skies around Ramstein Air Base are silent and the massive ramp is nearly empty of aircraft as contractors work to repair the base runway.

Work started at about 10 p.m. Sunday on the $2 million in repairs that will patch weak spots on the runway&#8217;s approach end, lay new asphalt in the center and improve drainage on the west end, said Lt. Col. Gregory Rosenmerkel, commander of the 435th Civil Engineer Squadron. The last plane, a C-5 that took off late because of repairs, left at 9:58 p.m. Sunday.

&#8220;Within minutes of that aircraft taking off, the construction trucks were rolling,&#8221; Rosenmerkel said.

The runway will be completely closed through Friday, then will reopen to C-130 and smaller-plane traffic early Saturday. It will reopen to all other air traffic on Sept. 23.

Contractors are working all day and all night to get the job done, Rosenmerkel said.

The Air Force had to divert dozens of flights a day &#8212; the bulk of military air traffic in Europe &#8212; while the work is being done. It also had to reroute or cancel flights for 3,000 duty and space-available passengers.

Most wounded and ill troops from Iraq and Afghanistan are being bused from Rhein-Main Air Base to Landstuhl Regional Medical Center. Most cargo and duty passenger traffic is going to RAF Mildenhall, England, and Spangdahlem Air Base, Germany.

On Tuesday, the normally buzzing air terminal on Ramstein was quiet. Information screens that usually list a full slate of flights were blank. The few duty passengers processed were gone by bus to Spangdahlem before dawn.

While the runway is closed, airmen who handle cargo and process passengers are catching up on backlogged training, said Capt. Andy Jones, officer in charge of passenger services for the 723rd Air Mobility Squadron. The terminal floor is getting a good wax and the employee break room is being renovated, he said.

By 6 a.m. next Thursday, the airfield will return to full operation, said Lt. Col. Cliff Puckett, commander of the 435th Operations Support Squadron.

Puckett and Rosenmerkel were in the air traffic control tower watching the last plane depart Ramstein on Sunday. They said they&#8217;ll be back when the airfield fully reopens.