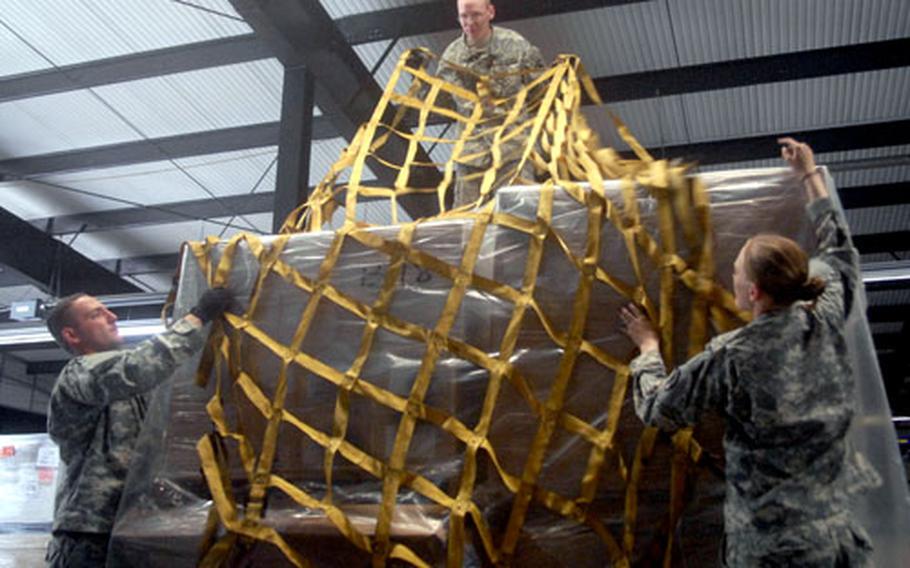 KAISERSLAUTERN, Germany &#8212; Two Ramstein Air Base C-130s left for the embattled nation of Georgia on Friday and more are expected to deliver additional humanitarian aid shipments in the coming days.

"Our plan is to conduct one to two flights a day until further notice," said Navy Lt. Cmdr. Corey Barker, a U.S. European Command spokesman.

Each of the C-130s that flew from Ramstein on Friday carried three pallets of humanitarian aid. Together, the planes carried 13,000 pounds of goods bound for Georgia. Also on the flights were nine airmen with the 86th Contingency Response Group and one U.S. Agency for International Development employee who will stay in the country to help with the relief effort, said Air Force Capt. Erin Dorrance, 86th Airlift Wing spokeswoman.

"We&#8217;re going to continue the support as long as the State Department and the host nation say they have a need," Dorrance said.

Soldiers wrapped stacks of boxes with clear plastic and then secured the loads with cargo nets onto metal pallets. The pallets will then be moved to nearby Ramstein Air Base where they will be loaded onto planes.

As early as Tuesday, soldiers began securing loads bound for the country.

"The whole purpose of this humanitarian effort is to assist Georgian civilians on the ground who are in desperate need of this support," said Army Lt. Col. Bob Curran, commander of the 39th Transportation Battalion.

About 115 U.S. soldiers in Tbilisi remain on stand-by in case they are needed for the ongoing humanitarian effort, Barker said.

"We&#8217;re in the assessment phase to determine what level of support to provide," Barker said.

A U.S. Army Europe survey team is currently in Georgia to judge the scope of the humanitarian need and determine what level of assistance will be required. The team will be in the country through the weekend.

The soldiers, who have been in the country since the start of the conflict between Russia and Georgia, could possibly help with the distribution of supplies. They also could soon be returning home if it is determined their presence isn&#8217;t needed, Barker said.

The soldiers were initially in the country for Immediate Response 2008, which is part of an on-going training partnership between the Georgian and American militaries. Virtually all of the 1,000 member U.S. force that took part in the exercise was out of the country by the time the conflict started more than a week ago.