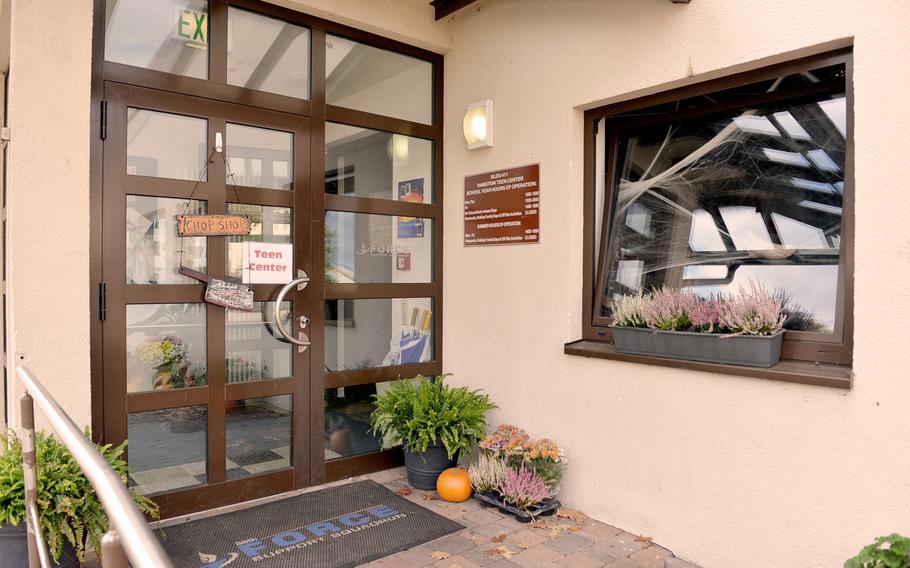 Buy Photo
The entrance to the Teen Center on Ramstein Air Base in October 2018. The center started charging $70 per year per child to attend the center. The Army, in nearby centers, charges no fee except for special programs. (Will Morris/Stars and Stripes)

KAISERSLAUTERN, Germany — The Air Force has begun charging a $70 annual fee for dependents to attend teen activity centers on Ramstein and Vogelweh air bases, while similar Army centers offer the service for free.

Air Force officials said the annual surcharge was necessary after the two teen centers sustained $29,300 in losses “through operations that did not charge enough to cover costs” in 2017.

However, the Air Force installations in Germany are near Army bases, where soldiers and their children don’t pay anything for teen and youth center access. The fees also come following a government report that the Air Force hasn’t met spending targets for Morale, Welfare and Recreation programs for six years running.

Teen center programs get financial support from other agencies, such as the Air Force Aid Society, Boys and Girls Clubs of America and the 4-H Club. This support is not counted in the teen center budget because the donation amounts and when they are received can vary greatly.

Support squadron leadership “wants to continue providing top-notch programs, but we must be responsible and keep programs out of the red,” Sanders said. “Our goal is no profit no loss.”

All branches of the military are supposed to pay for 65 percent of the cost of running MWR programs, such as the Teen Center, before passing on costs for some types of programs. A Government Accountability Office report published in August found that the Air Force hasn’t done so since 2012. The Army met or exceeded the target funding amount in all but two years during the same period, according to the report.

Michelle Fischer, a mother of two at Ramstein and a former airman, said the charge is unfair, especially when the Army has found a way to provide them for free.

“The Air Force is always talking about putting family first but when it comes to them and ‘family first,’ they don’t put their money where their mouth is,” Fischer said.

Erica Shockley, an Army wife who lives close to Ramstein Air Base, said her daughter uses the teen center on the air base. She recently moved from Stuttgart, where the Army runs a teen center for free. She said the fee doesn’t faze her but hasn’t decided whether she will pay.

“What are the youth getting out of it? What am I paying for?” Shockley said. “We don’t really care that we have to pay an extra $70, we just want to know why. I want to know what the benefits will be to her other than just a place to hang out with her friends.”

Shockley’s daughter Emma said the fee could reduce attendance at the center, in some cases because her parents expect their children to pay for it themselves.

On social media sites, several parents expressed concern about the fee. Others said teens had been turned away at the center for lack of payment.

Sanders said that some teens were turned away from the teen center when the initial deadline to pay the fee passed on Oct. 15.

“However, after hearing from parents, we realized some may not have received notification of the change,” Sanders said.

Parents now have until Nov. 16 to pay the fee. The Air Force will work with families who have financial concerns, Sanders said.