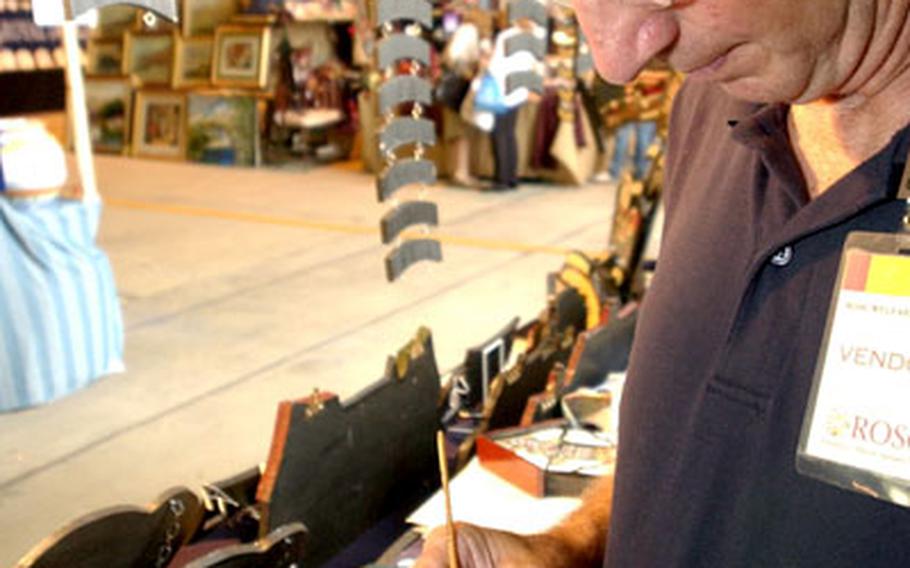 Bob Drewitt, a craftsman for Woodlands Studio in the United Kingdom, customizes a wall decoration for a customer during the 42nd annual Ramstein Welfare Bazaar. (Ben Bloker / S&S)

Fewer shoppers came out for the four-day event compared to last year, but visitors shelled out more cash on such items as English antiques, Persian rugs, Tuscan wine, German clocks and Dutch cheese. About 25,000 people attended last year&#8217;s bazaar and spent a little more than $2 million. In 2004, the bazaar brought in $2.2 million in sales.

Food vendors did well, too.

Units and commands in the area sold food at booths to raise money. For example, the A-3 Booster Club &#8212; a fundraising group that supports morale-boosting activities for the Directorate of Air and Space Operations at Ramstein Air Base &#8212; earned about $3,400 selling bratwurst and hot dogs.

The 435th Services Squadron sponsored the bazaar, and the Ramstein Officers&#8217; Spouses Club produced the event. Planning for this year&#8217;s bazaar began in February.