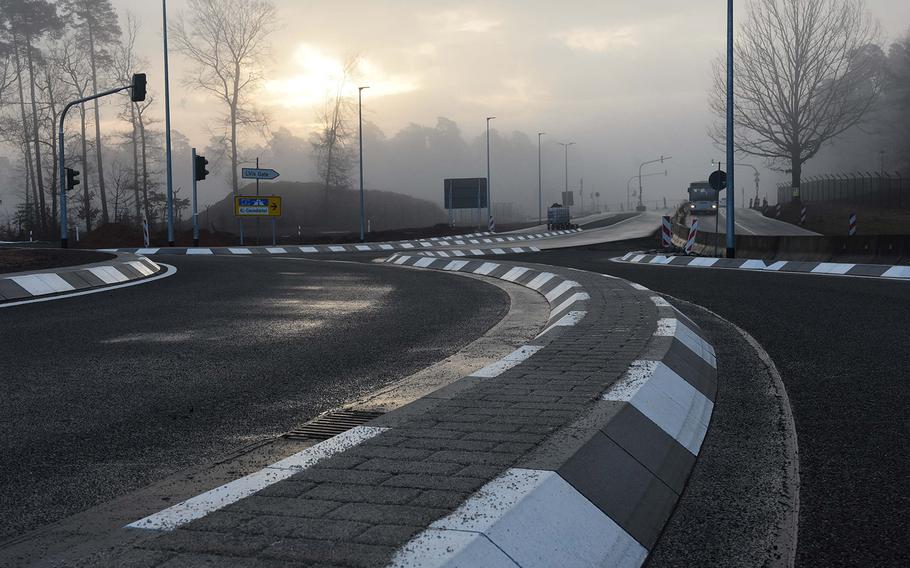 Buy Photo
The new L369 traffic circle outside the east gate of Ramstein Air Base, Germany, is scheduled to open on Saturday, Feb. 17, 2018. The circle is part of ongoing road work outside the gate to improve traffic flow once the new Defense Department medical center is built on Rhine Ordnance Barracks. (Jennifer H. Svan/Stars and Stripes)

Buy Photo
The new L369 traffic circle outside the east gate of Ramstein Air Base, Germany, is scheduled to open on Saturday, Feb. 17, 2018. The circle is part of ongoing road work outside the gate to improve traffic flow once the new Defense Department medical center is built on Rhine Ordnance Barracks. (Jennifer H. Svan/Stars and Stripes) 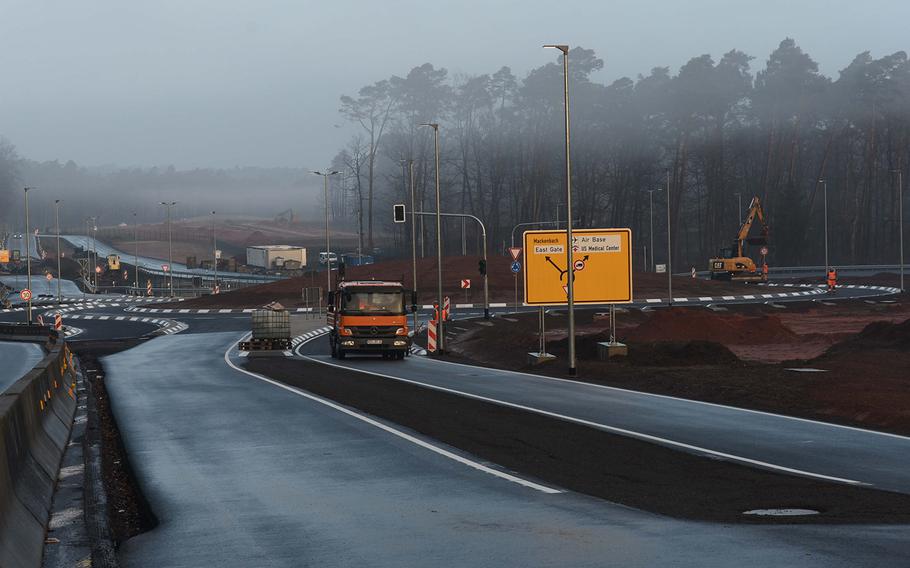 Buy Photo
The traffic circle outside the east gate of Ramstein Air Base, Germany, is scheduled to open on Saturday, Feb. 17, 2018. Motorists headed to or leaving the base's east gate will be diverted through the circle. Bypass lanes will open at a later date. ( Jennifer H. Svan/Stars and Stripes) 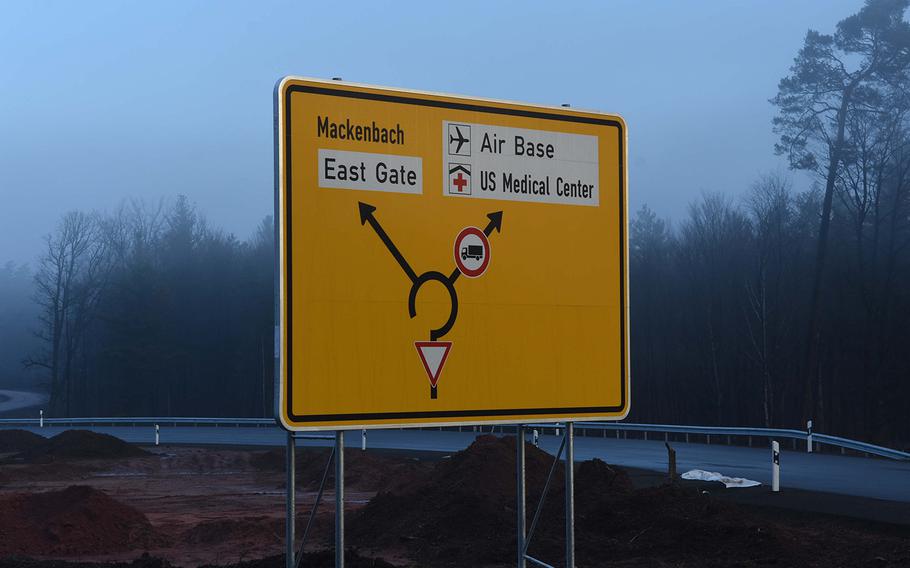 Buy Photo
Signage directs motorists through a new traffic circle outside of the east gate of Ramstein Air Base, Germany. Part of the circle will open on Saturday, Feb. 17, 2018. ( Jennifer H. Svan/Stars and Stripes)

RAMSTEIN AIR BASE, Germany — One lucky driver will be the first on Saturday to test the new traffic circle outside the east gate of Ramstein Air Base.

The L369 traffic circle, designed to improve access to the base and the Defense Department medical center under construction across the way, is scheduled to open Saturday.

About midmorning, construction crews should begin blocking off the current route into the east gate and diverting drivers through the circle, Army Corps of Engineers officials said.

The German government, with oversight from the Army Corps of Engineers, began constructing the traffic circle project more than a year ago.

If the circle looks like a complicated maze of asphalt lanes, it is.

Only one interior lane in each direction will open Saturday. But when it’s completed by December 2019, the new circle will be what’s called a “turbo circle,” project manager Matt Bryant said. “Motorists will be able to drive quickly through the interior lanes since there are four bypass lanes.”

The circle will affect all east gate traffic, whether drivers are coming or going from base, to or from the direction of Mackenbach or Einsiedlerhof on the L369.

“There may be some traffic delays while motorists become familiar with the layout of the new traffic circle,” said Catherine Bingham, a Corps of Engineers program manager.

The first real test of the new traffic pattern will likely come Monday morning, when hundreds of motorists typically use the east gate to get to school and work on Ramstein. A separate, unrelated construction project that started Thursday outside the base’s west gate could exacerbate the morning commute onto base for thousands of military personnel, civilians and their families.

But project planners hope that the finished circle will improve traffic flow into and out of Ramstein and the new medical center. The circle is also expected to improve traffic from the local communities and the A6 autobahn, Corps officials said. A bridge will eventually connect the two installations.

The new medical center is being built on Rhine Ordnance Barracks, a sprawling Army installation on the opposite side of the L369 from Ramstein. It’s scheduled to be finished by the end of 2023 and operational by the summer of 2024.

In the fall of 2018, construction on a bridge and new access control point will begin. The bridge will be built over the L369, connecting ROB and Ramstein Air Base, Corps officials said. It will be next to the east gate, on the side opposite the golf course.

The new bridge will provide direct access from the Ramstein flight line to the new medical center, Bryant said. It will also reduce traffic on the L369, allowing U.S. personnel to travel directly between installations.

The new bridge and access area are expected to open in the fall 2020. At that point, the east gate will be closed and used only for contingencies, officials said.

The cost of the traffic circle project, including construction management, utility relocation, environmental compensation and mitigation, is about 6.7 million euros, or about $7.4 million, Corps officials said. The bridge costs are folded into the medical center’s overall $990 million budget, officials said.