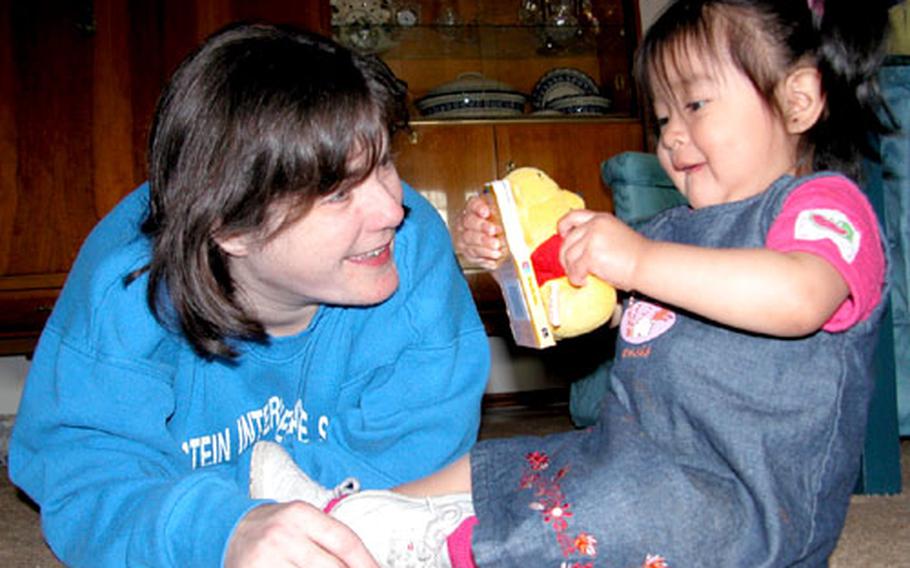 RAMSTEIN, Germany &#8212; Marelle Morgan had a good job and good friends and liked where she lived. Not bad, but not enough.

The 12th European Adoption Symposium will be Saturday at the Faith Baptist Church in Einsiedlerhof-Kaiserslautern. The daylong event features presenters sharing their experiences on the legal, financial and practical aspects of adopting.

Morgan began exploring adoption at the 2001 symposium, shortly after she moved to Ramstein from Dubuque, Iowa.

Adopting isn&#8217;t as simple as picking out a puppy at a kennel.

Decisions need to be made on the sex, age and race of the child. Countries have different laws about placing children up for adoption. The process can take a few weeks or a few years. Adopting a child can be free of charge or cost tens of thousands of dollars, depending on the circumstances.

&#8220;Different adoption agencies specialize in different (geographical) areas and types of children,&#8221; said Morgan, who decided she wanted to adopt a baby girl.

Her search turned up a pregnant woman in Guatemala who was already raising four children. The woman decided to put up the baby for adoption. On May 27, Morgan and her 7-month-old adopted daughter became a family.

But not until she&#8217;d been through two years of research, decisions and paperwork. The hard work paid off. Surprises have been few, the rewards plenty.

Veith said she tries to keep the event current with changing times. For example, this year&#8217;s symposium will feature a segment on &#8220;open adoption,&#8221; where everything is out in the open between the birth parent, adopting parent and child.

Morgan said she celebrates every morning when little Syrena Kathleen wakes up, opens her eyes and says, &#8220;Mommy.&#8221;

Cost: A 5 euro or $5 donation to the Landstuhl American Red Cross is suggested to cover the operating costs for the symposium.

Lunch: Snacks, beverages and a cold lunch are provided. There are food services in the area, although not within easy walking distance.