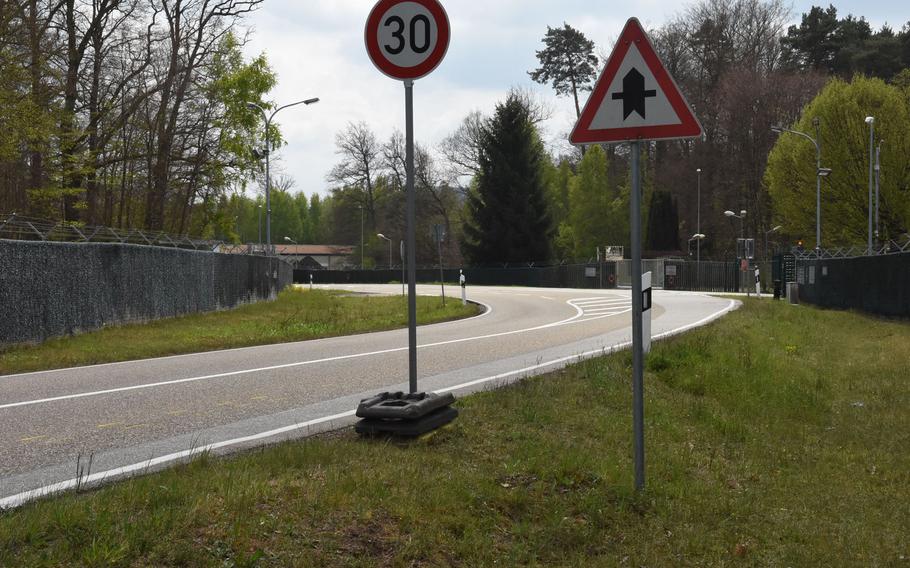 Buy Photo
The curve on K25 between Weilerbach and Ramstein Air Base, Germany, where Staff Sgt. Grant Davis was killed on his bicycle more than a year ago. Davis was in the southbound lane, on the right-hand side of the road, traveling toward Ramstein when he was struck by a car driven by Senior Airman Benjamin Hann. (Stars and Stripes)

KAISERSLAUTERN, Germany — An Air Force jury sentenced Senior Airman Benjamin Hann to four years in jail for crashing his car into the bicycle of a Ramstein airman and killing him in 2016.

The jury returned the sentence on Friday, two days after finding Hann guilty of negligent homicide in the death of Staff Sgt. Grant Davis. Hann also received a bad conduct discharge, reduction in rank to E-1 and total forfeiture of pay and allowances.

The jury of seven officers found Hann not guilty of reckless driving and involuntary manslaughter.

The sentencing concluded a lengthy and emotional court-martial that began April 24 at Ramstein Air Base with pre-trial proceedings.

Hann, assigned to the 721st Aerial Port Squadron, pleaded guilty before judge Col. Donald R. Eller to two counts of dereliction of duty, and one count each of making a false official statement and obstruction of justice.

Hann was driving his Ford Mustang on March 26, 2016, when he struck and killed Davis, who was riding his bicycle on the K25, a narrow road outside Ramstein. At the time of the crash, Hann’s U.S. Army Europe license was suspended.

Prosecutors said Hann, pressed to make a dinner reservation at a nearby bistro, drove at an excessive speed while attempting to pass an SUV on a blind curve. Hann, it was said in court, didn’t see Davis who was riding his bicycle in the opposite direction, until his car was over in Davis’ lane. By then, it was too late.

Davis died from traumatic injuries at the scene of the crash. He was 31, newly-married and highly-regarded in his career field as an evaluator communication system operator on board the C-40, C-37 and C-20 aircraft.

The jury could have sentenced Hann to a maximum 14 years in jail. Negligent homicide, the lowest level of criminal homicide in military law, carries a maximum three years in jail.

After delivering a verdict Wednesday, the jury on Thursday sat through an emotional sentencing hearing during which family members of both the victim and the defendant addressed the court.

Hann’s family asked the Davis family for forgiveness and asked the jury for leniency, noting that Hann has a 16-month-old son with whom “he’s attached at the hip.”

“I know he would have never meant to hurt anybody,” said Hann’s mother, Desiree Hann.

The Davis family, meanwhile, spoke of the pain of losing a son and husband. He and his wife had married two months before his death and were excited for their next duty station in Hawaii.

“We met in May, we got engaged in November and we got married in January,” said Heather Davis, the victim’s wife, smiling and crying while talking of her late husband. “I feel lost” without him.