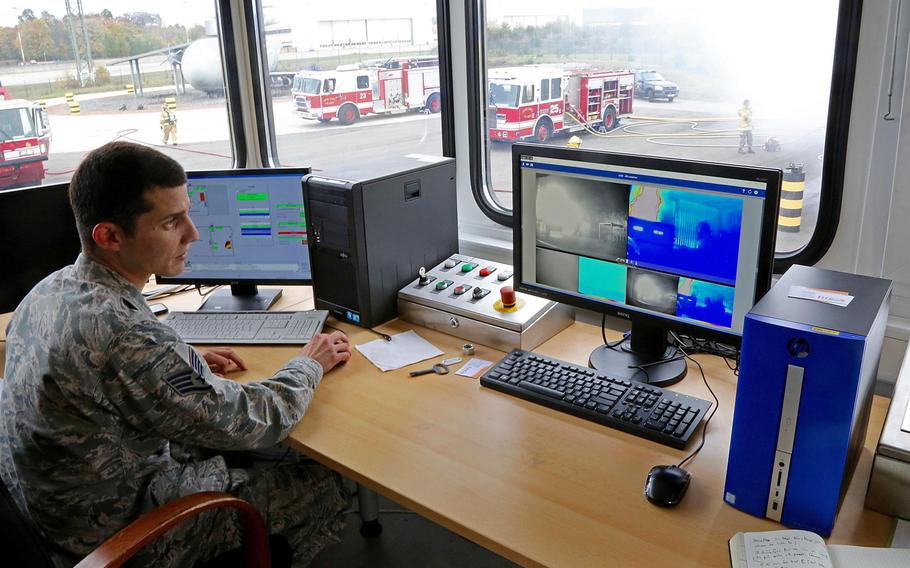 Buy Photo
Staff Sgt. Alberto Garcia-Vidal monitors other firefighters in a burn house by computer during training on Ramstein Air Base, Germany on Tuesday, Oct. 24, 2017. Garcia-Vidal distinguished himself recently as one of a group of 145 Red Cross volunteers who helped man a call center for victims of Hurricane Maria. (Will Morris/Stars and Stripes)

Buy Photo
Staff Sgt. Alberto Garcia-Vidal monitors other firefighters in a burn house by computer during training on Ramstein Air Base, Germany on Tuesday, Oct. 24, 2017. Garcia-Vidal distinguished himself recently as one of a group of 145 Red Cross volunteers who helped man a call center for victims of Hurricane Maria. (Will Morris/Stars and Stripes) 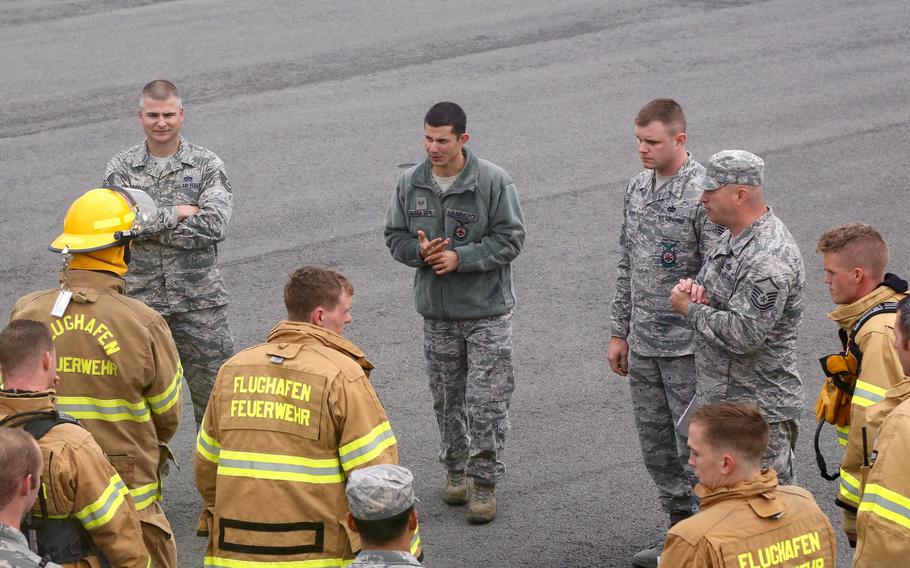 Buy Photo
Staff Sgt. Alberto Garcia-Vidal attends a safety briefing on Tuesday, Oct. 24, 2017, before a training exercise on Ramstein Air Base. Garcia-Vidal was selected to be the Red Cross Disaster Action Team Manager for Europe after his work in call centers during Hurricane Maria. (Will Morris/Stars and Stripes) 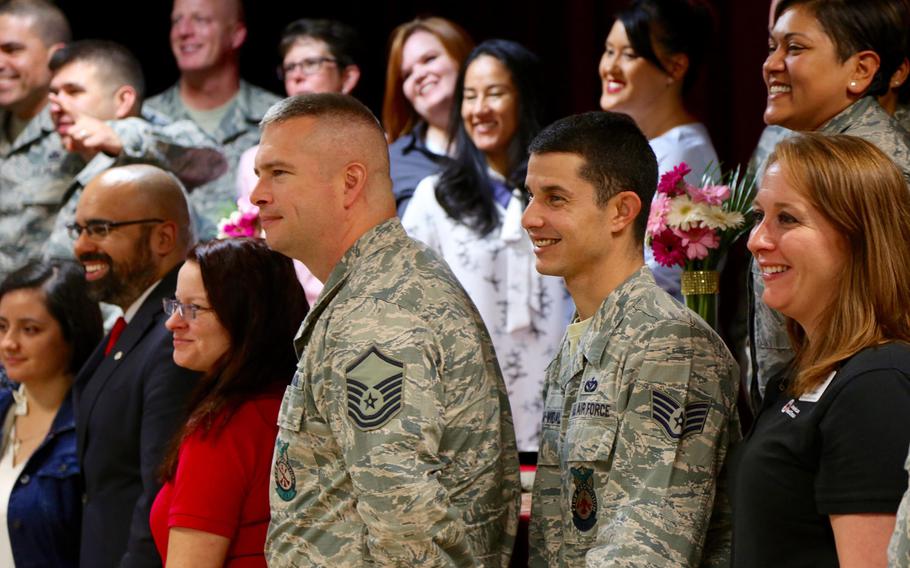 Buy Photo
Staff Sgt. Alberto Garcia on Tuesday, Oct. 24, 2017, after receiving a certificate of appreciation for his volunteer work with the European Red Cross in Kaiserslautern, Germany. (Will Morris/Stars and Stripes)

“She told me, ‘I have no food and I have water coming up to my roof,’” said Garcia-Vidal, of the 86th Civil Engineering Squadron’s Fire Emergency Services Flight.

Garcia-Vidal, a Puerto Rico native and firefighter volunteering on a Red Cross overflow hotline at Ramstein last month, couldn’t provide her with immediate aid. But he did use his emergency training to keep her calm and focused.

“It may not be exactly what they need, but it’s what you can give them,” Garcia-Vidal said. “Sometimes in that situation they just need someone to listen to.”

This week, Garcia-Vidal was one of 145 people recognized by the European Red Cross for their hurricane volunteer efforts at call centers the relief group set up at Sembach Kaserne, Ramstein Air Base and Landstuhl Regional Medical Center.

Garcia wanted to deploy to Puerto Rico to help, but his current orders in Germany and a hip injury that sidelined him from his normal duties removed that option.

Instead, Garcia-Vidal made himself available around the clock, earning added recognition from the Red Cross for his dedication. Because of his service and expertise, the European Red Cross appointed him disaster action team manager for Europe.

Garcia-Vidal said his approach to being a first responder and call center volunteer comes from a larger life philosophy.

“I think God put me here in the world to put a smile on people’s faces,” he said. “If I can do that (on calls) I feel like I have accomplished my mission.” Garcia-Vidal answered phone calls from people looking for lost children and other relatives, even while waiting to hear word of his own mother’s fate.

All he knew was that the town she lived in, Cabo-Rojo, was hit hard when Hurricane Maria struck the island on Sept. 20 with 155 mph winds.

“I was just hoping for my mom to call the Red Cross while I was there,” Garcia-Vidal joked.

Several days after the call center closed, Garcia-Vidal received a phone call from a relative that his mother was fine.

Currently, Puerto Rico officials estimate that 51 people have died across the island from hurricane-related illnesses or injuries. Nearly 20 percent of the island is still without drinkable water.

Garcia-Vidal’s desire to help arose from a long history with the Red Cross.

On January 11, 2011, his father died from complications due to an enlarged heart.

The death came suddenly when Garcia-Vidal was a new airman in technical school. With a young family, Garcia-Vidal said he was faced with either overextending his finances or not going to his father’s funeral. The Red Cross took care of him.

“They bought my ticket back to Puerto Rico and didn’t ask for anything back,” he said. “Now, they have an airman volunteer for life.”

Garcia-Vidal is known around the fire station as a consistently upbeat airman with integrity, according to supervisor Master Sgt. Brian Wells.

“He’s one of the reasons I like coming to work,” Wells said. “He’s a wonder to work with. He’s the kind of guy you can call at 3 a.m. and he will be there for you.”