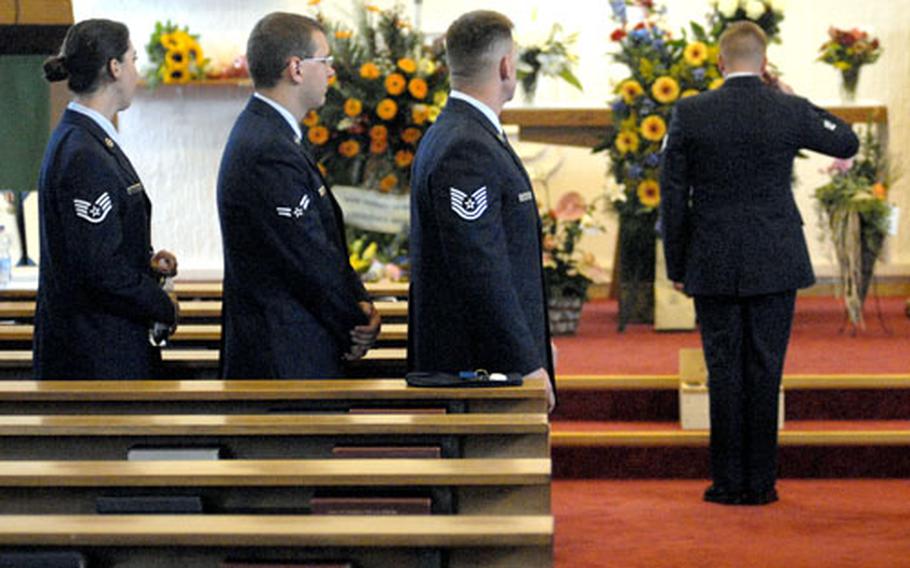 Airmen assigned to the 86th Construction and Training Squadron pay their last respects to Maj. Rodolfo Rodriguez after the conclusion of a memorial service in his honor Thursday at Ramstein&#39;s North chapel. (Ben Bloker / S&S)

Airmen assigned to the 86th Construction and Training Squadron pay their last respects to Maj. Rodolfo Rodriguez after the conclusion of a memorial service in his honor Thursday at Ramstein&#39;s North chapel. (Ben Bloker / S&S) 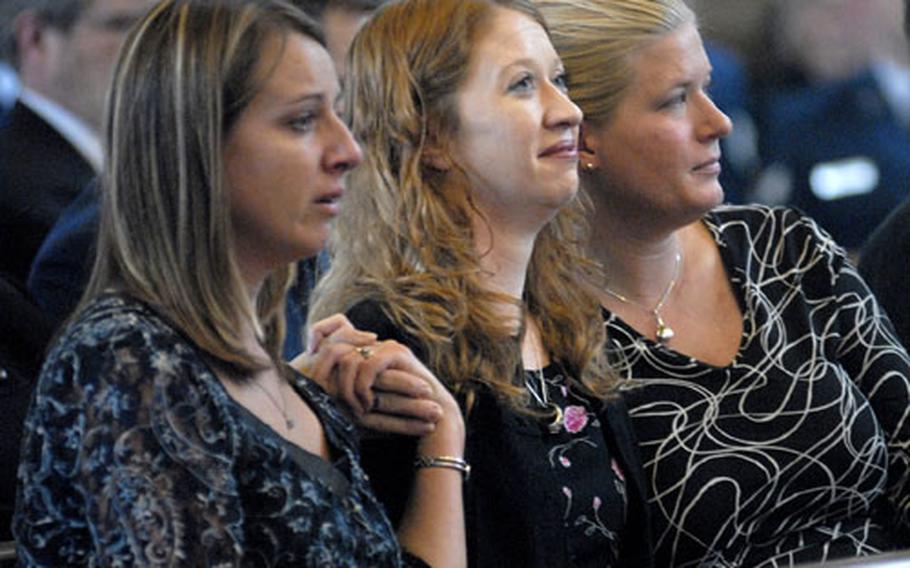 RAMSTEIN AIR BASE, Germany &#8212; Outside the Islamabad, Pakistan, Marriott Hotel last Saturday night, Air Force Maj. Rodolfo "Rod" Rodriguez was on the phone with a sergeant, talking about a construction project, when the line went silent.

Rodriguez was one of 53 killed when a truck bomb exploded outside the hotel. The 34-year-old Air Force Academy graduate is the first Ramstein airman to die "in support of Operation Enduring Freedom" &#8212; the military&#8217;s term for the Afghanistan war and other worldwide operations. Rodriguez served as commander of the Contingency Training Flight, 86th Construction and Training Squadron.

A standing-room-only crowd that overflowed into the foyer gathered Thursday afternoon at Ramstein Air Base&#8217;s North Chapel to pay tribute to Rodriguez during a memorial service. Among the hundreds in attendance were Rodriguez&#8217;s wife, Caryn, a schoolteacher at Landstuhl, and Gen. Roger Brady, U.S. Air Forces in Europe commander.

Rodriguez was working out of the U.S. Embassy in Islamabad as the lead engineer for Special Operations Command Central&#8217;s current engagement in Pakistan, according to Rodriguez&#8217;s memorial service program.

Maj. Andrew Sheehan gave an 11-minute speech that touched on several aspects of his friend&#8217;s life. Sheehan told of how Rodriguez, a first-generation American, elevated himself out of a poverty-stricken situation in El Paso, Texas, earning a 4.0 grade point average in high school and an appointment to the Air Force Academy.

As an Air Force officer, Rodriguez had an unparalleled devotion to duty, Sheehan said.

"He was never the person to complain or seek out recognition for himself," Sheehan said. "He was the kind of quiet professional that we can all look up to. Whether you&#8217;re an officer or an NCO, you always hope to have people like Rod in your shop."

Repeatedly described as a quiet man, Rodriguez listened much more than he spoke.

"For those of us who have a tendency to perhaps say a few too many words, we are quick to be quiet when Rod is speaking because there is wisdom in his words," Sheehan said.

"Simply put, our hearts are broken," Bender said. "Today the American flag outside wing headquarters flew at half staff in somber recognition of a fallen American hero, a wingman, a leader and a warrior."

Rodriguez was posthumously awarded the Bronze Star Medal, Purple Heart, Meritorious Service Medal and Air Force Combat Action Medal. In addition to his wife, he is survived by his mother and two brothers.