Buy Photo
A bicycle memorial sits by the roadside outside Ramstein Air Base, Germany, near where Air Force Staff Sgt. Grant Davis died on March 26, 2016, when his bicycle was struck by a car. Senior Airman Benjamin Hann was convicted Wednesday, May 3, 2017, of negligent homicide in connection with Davis's death. (Jennifer H. Svan/Stars and Stripes)

Buy Photo
A bicycle memorial sits by the roadside outside Ramstein Air Base, Germany, near where Air Force Staff Sgt. Grant Davis died on March 26, 2016, when his bicycle was struck by a car. Senior Airman Benjamin Hann was convicted Wednesday, May 3, 2017, of negligent homicide in connection with Davis's death. (Jennifer H. Svan/Stars and Stripes) 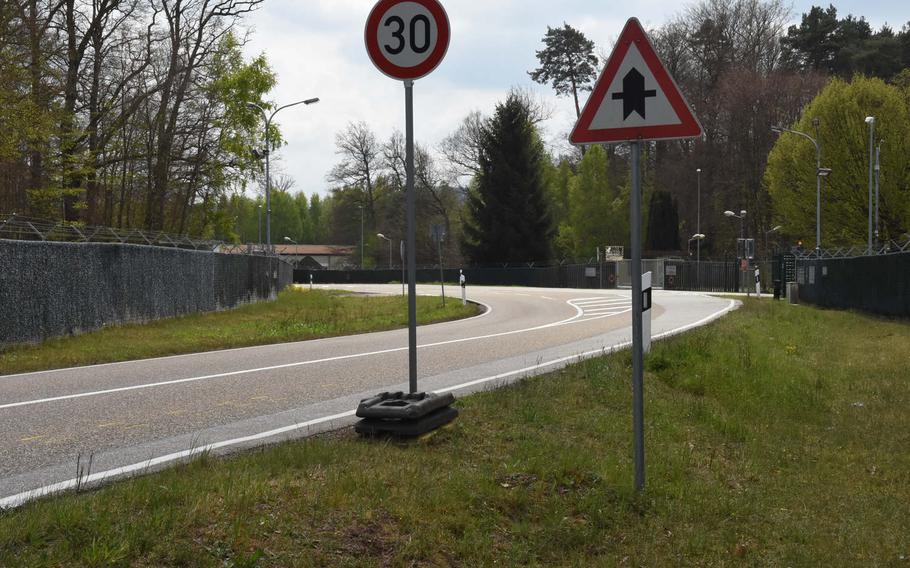 The curve on K25 between Weilerbach and Ramstein Air Base, Germany, where Staff Sgt. Grant Davis was killed on his bicycle more than a year ago. Davis was in the southbound lane, on the right-hand side of the road, traveling towards Ramstein when he was struck by a car driven by Senior Airman Benjamin Hann. Hann was convicted of negligent homicide Wednesday, May 3, 2017, in connection with Davis's death. (Jennifer H. Svan)

RAMSTEIN AIR BASE, Germany — In an emotionally wrought sentencing hearing Thursday, a military jury listened to family members speak of their devastation from the death of Staff Sgt. Grant Davis, a Ramstein airman who was killed last year while riding his bicycle outside the base.

The panel of seven Air Force officers found Senior Airman Benjamin Hann guilty Wednesday of negligent homicide in connection with Davis’ death. As of Thursday, they were still deliberating on a sentence.

Hann also pleaded guilty to two counts of dereliction of duty and one count each of making a false official statement, and obstruction of justice.

Hann was driving a Ford Mustang that struck and killed Davis on March 26, 2016, near the gate of the Weilerbach Ammunition Depot.

Family members of both Davis and Hann spoke in court Thursday.

Heather Davis, who married Davis two months before his death at his home in upstate New York, tearfully recalled the last time she saw Davis. The two had returned from a Saturday trip to Wuerzburg, and Heather Davis asked him if he wanted to walk the couple’s two dogs with her. “He said that it was such a nice day that he wanted to go for a quick bike ride,” she said.

The government alleged that Hann, pressed to make a dinner reservation at a nearby bistro, drove recklessly and tried to pass an SUV at an excessive speed on a blind curve on the K25. His vehicle veered from the northbound lane into the southbound lane, where he smashed into Davis, who was riding in the opposite direction towards Ramstein.

Hann was driving an estimated 40-60 miles per hour in the 50 kilometer-per-hour (31 mph) zone, according to court testimony.

A gate guard at the depot said the impact sounded like a bomb going off.

Davis died at the scene from traumatic injuries. A medical examiner testified the airman’s injuries were similar to those seen in a bomb blast or from getting hit by a train.

Davis, a 31-year-old avid cyclist from Delevan, N.Y., was assigned to the 76th Airlift Squadron at Ramstein as a communication system operator, serving on board C-40, C-37 and C-20 aircraft.

Tech. Sgt. Ken Turnidge, who worked with Davis, said the effects of Davis’ death are still being felt by the squadron.

Hann’s U.S. Army Europe license was suspended at the time of the crash for failure to take care of an earlier traffic violation. Worried about getting into trouble for driving without a USAREUR license, Hann tried to get two of his co-workers — one a passenger in his car, the other in the vehicle trailing him — to say they were driving his car, according to court testimony this week.

The jury found Hann not guilty of reckless operation of a vehicle and involuntary manslaughter. In military law, negligent homicide is the lowest level of criminal homicide. It requires simple negligence, or failure to use a reasonable degree of care for the safety of others.

Hann’s military attorneys maintained the crash was an “unintentional collision” for which he should not be held criminally liable.

“This was a tragic accident,” said Capt. Marquita Ricks.

Ricks said that the government did not prove its case beyond a reasonable doubt, arguing that they did not prove Hann’s speed was excessive or that he was indeed passing on the blind curve.

Hann is assigned to the 721st Aerial Port Squadron and married to a fellow airman at Ramstein, with whom he has a 16-month-old son. “I want to apologize to the Davis family,” he said in court Thursday. “I’m sorry. I wish I had made better choices. I wish I had never driven.”