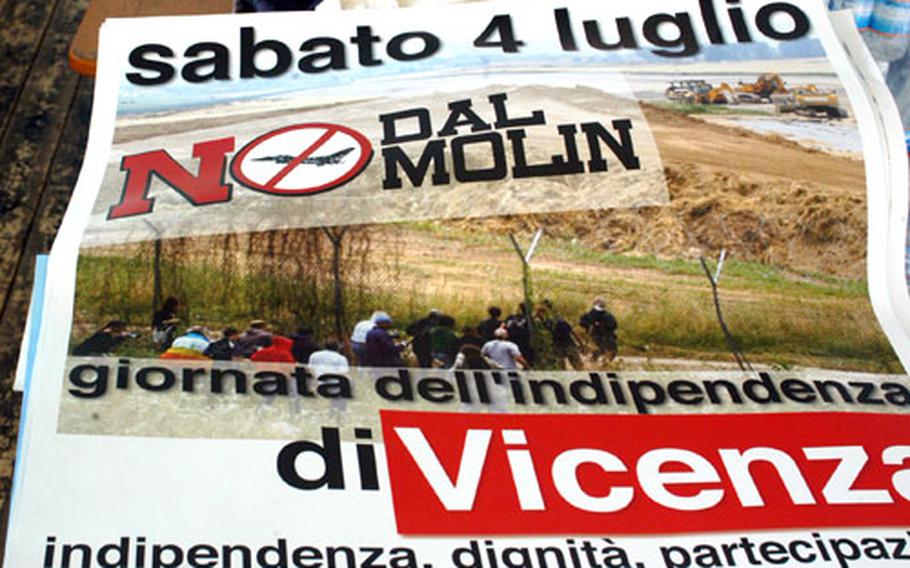 Thousands of Italiian protesters are expected to march outside the gates of the Dal Molin airfield in Vicenza, Italy, on Saturday to demonstrate against an expanded American military presence in the city. (Kent Harris / Stripes)

VICENZA, Italy &#8212; Tens of thousands of Italians traditionally gather in Vicenza to celebrate the United States&#8217; Independence Day with members of the American military community. But the only large gathering planned for this Saturday at Caserma Ederle is a protest against the American military presence in the country.

Base officials have moved this year&#8217;s festivities to Thursday and will not be opening the gates to the Italian community as has been the practice in years past.

However, the annual celebration wasn&#8217;t altered because of the protest, according to Jon Fleshman, public affairs officer for U.S. Army Garrison-Vicenza. A number of factors &#8212; including construction, a four-day weekend and a lack of parking on base &#8212; contributed to the base shifting the festival two days forward.

Italians who work at the base will be allowed to attend the festivities, but local residents aren&#8217;t being invited because construction has created a limited amount of space in which to hold activities on base. In fact, officials won&#8217;t be setting off fireworks either, also because of the construction projects, Fleshman said.

The base will proceed with a scaled-down celebration featuring food booths, live music, rides and a laser-light show. Events start at 5 p.m.

There might be fireworks of a sort on Saturday when organizers expect about 15,000 people to march around the Dal Molin airfield, a few miles from Caserma Ederle.

Successive Italian governments have approved the U.S. use of the largely abandoned property as barracks and office space for the 173rd Airborne Brigade Combat Team. Four of the brigade&#8217;s battalions are currently based in Germany and the U.S. military wants to consolidate the unit in Vicenza by the end of 2012.

But some Italians oppose the expanded U.S. military presence in the city, and they&#8217;re still vowing to stop the project even though Italian contractors have been working for months to clean up the site for construction.

A loosely knit organization known as &#8220;No Dal Molin&#8221; is organizing the protest, though people from many other groups are expected to participate. Andrea Silvestri and Angela Dibiase, two local organizers, said the protests&#8217; goal is to &#8220;take back&#8221; the facility from the Americans, who they believe are occupying it against the wishes of the local population.

Silvestri, a radiology technician, said most of those demonstrating want the U.S. military out of Italy.

Fleshman said Americans have been urged to stay away from areas where protesters will gather.

Some 1,500 Italian law enforcement officers are expected to be on hand for the protest.