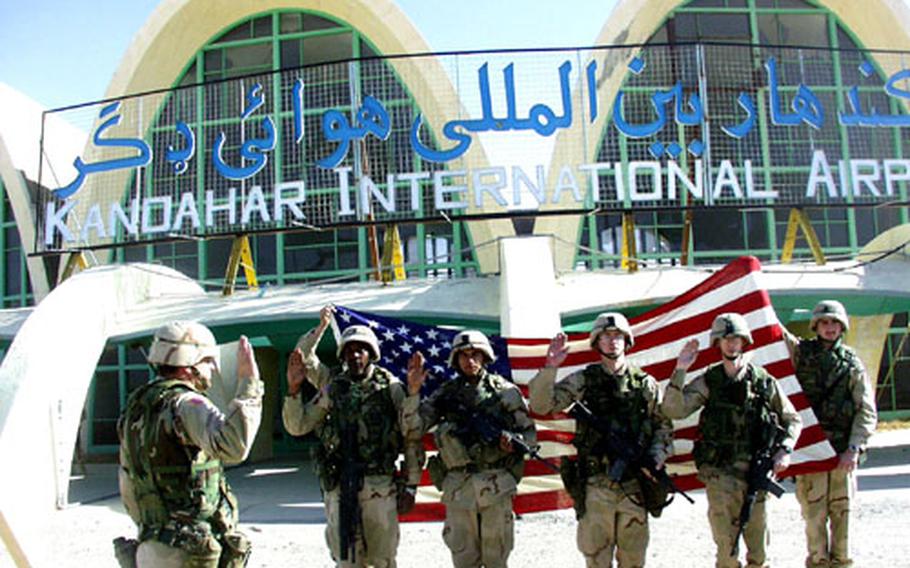 Known as the Rakkasans, the brigade over the past three years has bounced from peacekeeping in Kosovo to terrorist hunting in Afghanistan to warfighting in Iraq. It has spent more than 16 of the past 24 months deployed &#8212; and faces a second Christmas away from home because it&#8217;s not due to rotate out of Iraq until spring.

Despite the brutal pace, troops within the brigade are re-enlisting in record numbers.

That surprised Master Sgt. Eric Miller, the brigade&#8217;s top career manager, who said he &#8220;literally laughed&#8221; when he received his three-month re-enlistment objective for the brigade in July.

The quota of soldiers he had to convince by the end of September to stay in the Army included 81 &#8220;first-termers&#8221; finishing up their initial contracts, 20 mid-career soldiers with less than 10 years in the Army and 17 career soldiers who had crossed the 10-year mark.

Of 400 initial-term soldiers eligible to re-enlist, 83 agreed to a second tour. And more have re-enlisted this quarter than in any quarter in the previous five years, said Miller.

Miller credits the trend to good leadership and soldier pride.

&#8220;Leaders at every level are genuinely interested in their soldiers&#8217; futures and welfare, and the soldiers are taking pride in how much they have endured,&#8221; he said.

&#8220;They&#8217;re doing exactly what they signed up to do: serve their country; fight for the freedoms we all enjoy as Americans; and make their families, our veteran Rakkasans and their children proud of what they&#8217;re doing,&#8221; said Col. Michael Linnington, commander of the Rakkasans &#8212; which roughly translated means &#8220;umbrellas from heaven,&#8221; from when the brigade headed to Japan after World War II.