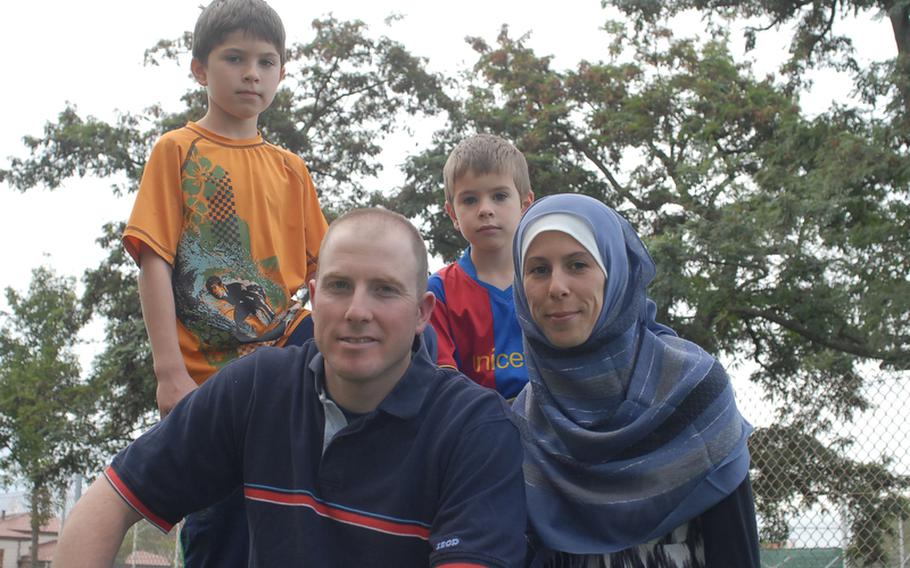 The Tarantinos say converting to Islam has given them new purpose, meaning and guidance in their lives. The adults have given up music and alcohol. The children have given up the tooth fairy and Santa. In their back yard, from left are Andrew and Jayden, and their parents, Chris and Cristina. (Nancy Montgomery/Stars and Stripes)

The Tarantinos say converting to Islam has given them new purpose, meaning and guidance in their lives. The adults have given up music and alcohol. The children have given up the tooth fairy and Santa. In their back yard, from left are Andrew and Jayden, and their parents, Chris and Cristina. (Nancy Montgomery/Stars and Stripes) 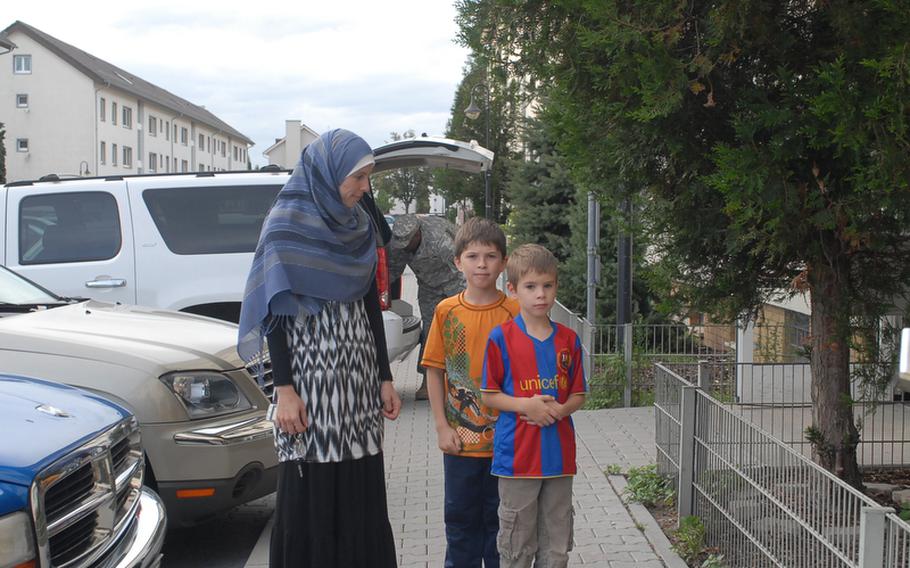 Cristina Tarantino, who, along with her husband, a sergeant in the U.S. Army, converted to Islam and started a charity to send food to Somalia, stands with her sons, Andrew and Kayden, outside their home on Ben Franklin Village in Mannheim, Germany. (Nancy Montgomery/Stars and Stripes)

MANNHEIM, Germany &mdash; They&rsquo;d both been reared Roman Catholic, she in Mannheim, Germany, he in Kissimmee, Fla.

But when Spc. Chris Tarantino deployed to Iraq in 2006, his wife began to ask questions about life and death that led her to convert to Islam.

&ldquo;I was really, really scared something was going to happen to him,&rdquo; said Cristina Tarantino.

She started to wonder what happened after death, she said, and how to best live life on earth.

She was spending time with her older sister, who had converted to Islam after marrying a Palestinian, and she sought her sister&rsquo;s guidance.

Her sister&rsquo;s answers about Islam made sense to Cristina and gave her some serenity, she said.

She discussed her spiritual progress with her husband in frequent phone calls between Camp Taji, Iraq, and Mannheim.

Even so, &ldquo;I was kind of shocked when I heard her say it &mdash; &lsquo;I&rsquo;ve accepted Islam,&rsquo;&rdquo; Chris, now a sergeant, said.

His first question was whether she had begun wearing a hijab. She wasn&rsquo;t ready yet, she said. But he didn&rsquo;t ask her a lot, he said. &ldquo;I asked for guidance in my prayers.&rdquo;

And by last year, the second time he deployed to Iraq, the blond, blue-eyed soldier had also become a Muslim. He decided not to hide it.

&ldquo;I went to Kuwait and bought a prayer rug and started praying right there,&rdquo; he said. &ldquo;I saw it wasn&rsquo;t the end of the world to say I was a Muslim.&rdquo;

During the past decade of fighting in Muslim countries, some soldiers occasionally have to battle perceptions that Muslims are hostile to the military they serve.

Chris enlisted in the Army in 1998, before radical Islamists attacked New York and Washington, D.C., and the U.S. went to war in two Muslim nations. He said he&rsquo;d never had any feelings, positive or negative, about Muslims, even when heading to Iraq.

&ldquo;All I knew was we were going to combat terrorism,&rdquo; he said. &ldquo;As a soldier, I just did what I was told. They say ignorance is bliss. I guess I was ignorant.&rdquo;

Then, as his wife grew more religious and he was drawn with her to a Sunni mosque in Mannheim, he said the whole idea of radical, violent jihad against the West seemed utterly wrong.

But his situation is unusual: He&rsquo;s the only U.S. soldier at his German mosque, one of the few Muslims in the Army and one of even fewer Muslim soldiers who are not from a traditionally Muslim family or African-American.

&ldquo;I have to say that I&rsquo;ve met zero that are of my race,&rdquo; he said. And although the couple&rsquo;s conversion is personal, not political, his views on the wars in Iraq and Afghanistan, and war in general, have changed.

&ldquo;As Muslims, we believe that if you kill one innocent person, it&rsquo;s as if you&rsquo;ve killed the entire world. But if you save one person, you save the entire world,&rdquo; said Chris, who is in the Signal Corps and works on communications equipment. &ldquo;I want to be on the side that&rsquo;s helping.&rdquo;

As part of that idea, the couple helped start a non-profit group to send food and medical supplies to Somalia, a failed state undergoing the worst famine in decades.

Since 2006, the country has faced an insurgency led by al-Shabab, a militant Islamist group that controls much of southern Somalia.

The famine, caused by drought, war, restrictions on aid groups and continuous chaos, has pushed 4 million Somalis &mdash; more than half the population &mdash; into &ldquo;crisis,&rdquo; according to the United Nations. Some 750,000 are at risk of death in the next few months, the U.N. says.

&ldquo;The unfortunate reality is that Somalia is the most difficult operating environment for humanitarians in the world today,&rdquo; Nancy Lindborg, USAID&rsquo;s assistant administrator for the Bureau for Democracy, Conflict and Humanitarian Assistance, wrote on the U.S. State Department official blog. &ldquo;Access continues to be denied by Al-Shabaab and other armed groups, creating an indefensible situation where they would rather put hundreds of thousands of Somali lives in jeopardy than allow humanitarian aid in.&rdquo;

But the Tarantinos and others at Al-Faruq Omar Mosque felt they had to do something.

Cristina was one of seven people from their mosque who formed a group called IslamischerHumanitaererEntwicklungsdienst, or the Islamic Humanitarian Development Service(www.IHED.de)

In just a few weeks, the charity had collected and put onto pallets 135 tons of food and medical supplies, Cristina said. Her husband provided some of the muscle.

&ldquo;I help when there&rsquo;s a load to be carried,&rdquo; he said.

It was all collected, organized and carried during Ramadan, when Muslim adults don&rsquo;t eat or drink from sunrise to sunset. &ldquo;You&rsquo;re talking about some guys who were completely kaput,&rdquo; Chris said.

The food and supplies were picked up from a warehouse near Cologne and shipped by sea late last month. Cristina said the supplies would arrive in northern Somalia in the beginning of November, then be driven to the central region for distribution. Another charity, Human Plus, found sponsors to pay for transporting the supplies, which cost about 40,000 euros or $57,400.

At home, the Tarantinos continue to study their new faith and seek to live it as fully as they can.

Cristina wears the hijab when she leaves the house, as well as a long skirt and long sleeves. In Germany, her clothes rarely raise an eyebrow. At their mosque, for instance, &ldquo;there are so many German converts,&rdquo; she said, mostly women. There are also Moroccans, Bosnians, Poles and Russians.

The family lives on base, and when she goes to the commissary, people stare at her. &ldquo;I feel like an astronaut,&rdquo; she said. &ldquo;Last time, when I went with my sister, they asked her if she was there to work,&rdquo; she continued, explaining that some Turkish women wearing hijabs clean the local schools.

&ldquo;I tell my husband, &lsquo;They probably think you brought me from Iraq.&rsquo;&rdquo;

But her husband has never had a problem with acceptance. Soldiers in his unit, the 72nd Signal Battalion rear detachment, know he&rsquo;s a Muslim. &ldquo;I&rsquo;d stop for prayer. I&rsquo;d talk to them about Islam because it&rsquo;s my chance to do a good deed,&rdquo; he said.

Only once did he get a bad reaction. He greeted a &ldquo;brother,&rsquo;&rsquo; another Muslim soldier, and an African-American, by saying in Arabic, &ldquo;Peace be upon you.&rdquo;

He plans to get out of the Army within the next year and move the family to the United States. Cristina plans to continue working toward a bachelor&rsquo;s degree in communications, and her husband plans to continue his studies at Embry-Riddle Aeronautical University.

&ldquo;The same stuff I&rsquo;ve been trained to do. Just without a gun,&rdquo; he said.

The couple met on base in Mannheim more than a decade ago. They&rsquo;ve been married three times: Once at city hall, once in church and the last time at their mosque.

One of the hardest things about their conversion had to do with their two young sons. &ldquo;We were like, &lsquo;What do we tell the kids?&rsquo;&rsquo;&rsquo; Cristina said. &ldquo;So, gradually there was no tooth fairy, no Santa Claus. ... They took it very well.&rdquo;

Chris gets a little uncomfortable when the discussion gets around to the afterlife, the promise to men of multiple virgins, and the possibility of his taking more wives in the future. His wife made it clear where she stands.