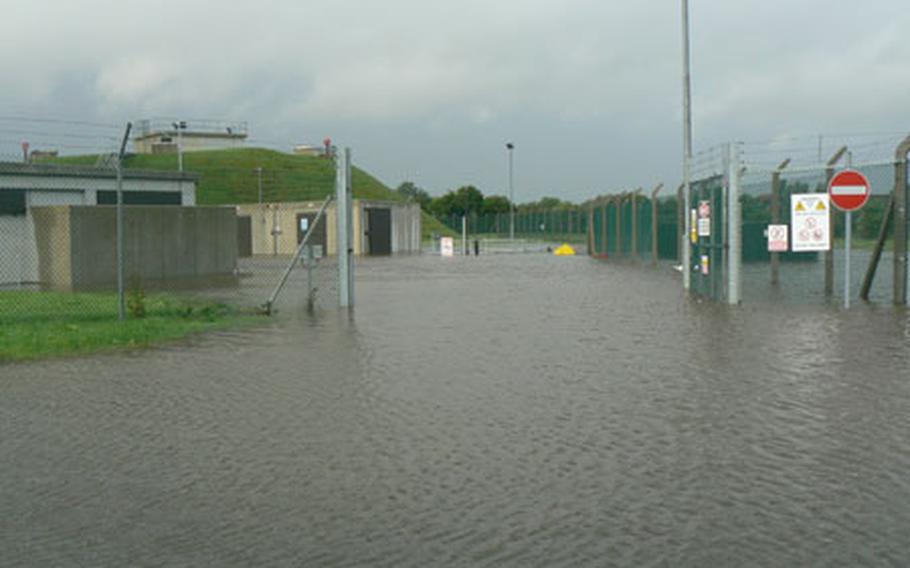 One of RAF Fairford&#39;s fuel operations compounds submerged by rainwater on Saturday. (Steve Grace / Courtesy of the U.S. Air Force)

Ten facilities and eight housing units were damaged after 5&#189; inches of rain fell on Friday. The rainstorm, followed by additional rain over the weekend, flooded nearby towns and left thousands without running water. It also caused major disruptions in road and rail networks.

Minor flood damage on RAF Welford has been included in the $200,000 estimate.

On Tuesday, most of the water on Fairford had receded, with some still visible on the eastern portion of the runway. The base is fully mission capable and in a recovery period, according to Maj. Steve Grace, commander of the 420th Civil Engineering Squadron.

&#8220;We can still operate the same way we did last Thursday before the storm. We&#8217;ll just have to go in and do some cleanup,&#8221; Grace said, adding that the base plans to initiate work orders and hire contractor support in the near future.

Base personnel acted quickly during Friday&#8217;s storm surge to divert water from buildings and housing areas, using sandbags and barriers. Without those quick actions, Fairford&#8217;s 84-unit housing area could have had a few inches of water in almost every house, he said.

The base supports roughly 200 airman and their families.

Eight households weren&#8217;t so lucky. Those families have been displaced into temporary quarters on base, Fairford housing manager Linda Freeman said.

She said the housing area had about $30,000 in damage, but that amount may increase since her office received a few more reports of flooded homes on Tuesday.

Fairford&#8217;s community center suffered the most significant damage as water seeped onto its carpets, hardwood floors and walls. The roof also was leaking.

Anticipated rainfall in the forecast that could cause even more flooding in the area isn&#8217;t worrying the base command too much.

If the local community sees more flooding, the base could be adversely affected since it relies on off-base commercial power, he said.

He also said base personnel could assist local communities in flood relief, which they have already done with operations in the past, such as placing sandbags.