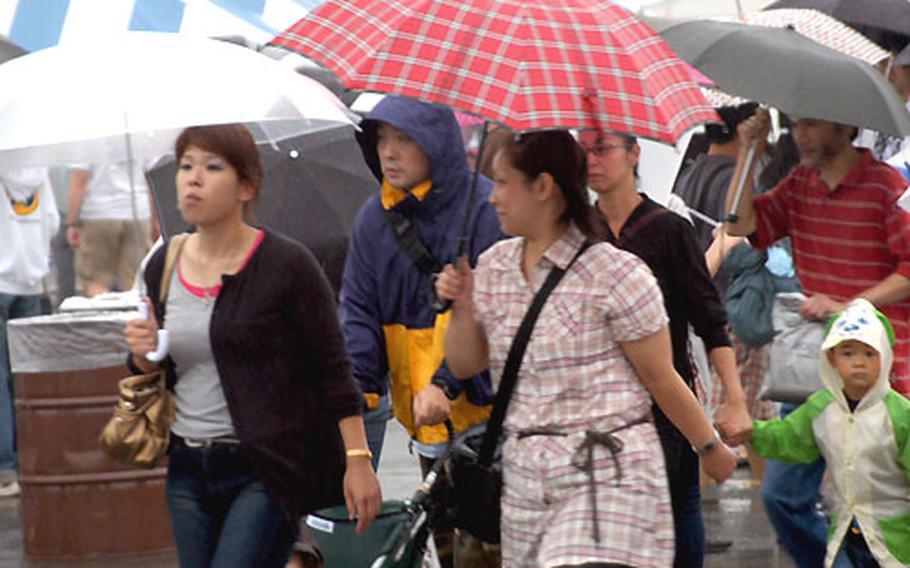 Japanese visitors walk through the rain with umbrellas drawn. Temperatures dipped into the upper 60s and a light, steady rain fell throughout the festival&#39;s opening day. (Vince Little / Stripes)

Japanese visitors walk through the rain with umbrellas drawn. Temperatures dipped into the upper 60s and a light, steady rain fell throughout the festival&#39;s opening day. (Vince Little / Stripes) A large crowd fills Yokota&#39;s Hangar 15 on Saturday for a performance by Okinawa Eisa Daiko during the festival. (Courtesy of Scott Champion) 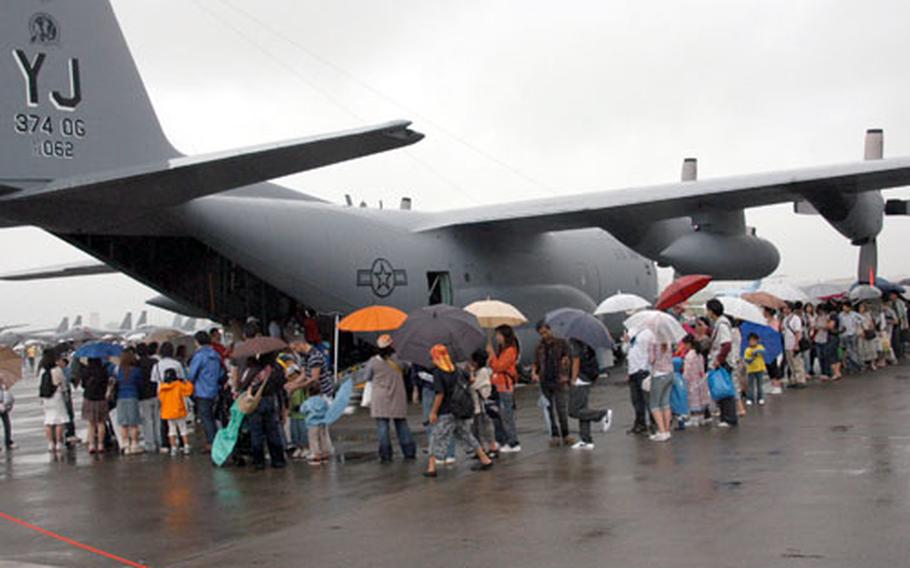 Visitors wait patiently in the rain Saturday for an inside peek at a C-130, among the many aircraft displays at the festival. (Vince Little / S&S)

Tens of thousands filed through Yokota&#8217;s gate and onto the base flight line Saturday for the start of the 58th annual Japanese-American Friendship Festival. The two-day event was expected to draw about 120,000 visitors.

The usual searing August heat and humidity of festivals past was displaced by temperatures dipping into the upper 60s and a light, steady rain that fell throughout the day. Forecasts called for more of the same for Sunday.

"People are out here with umbrellas, but they&#8217;re still having fun. At least there are no heat-related incidents this year."

The low ceiling and poor visibility forced cancellation of Saturday&#8217;s aerial demonstrations and parachute drops. The only aircraft that flew were the two A-10 Thunderbolts that arrived from Osan Air Base, South Korea.

But attendees waited patiently in the rain to snap pictures and walk around the various U.S. military and Japanese aircraft on display.

People lined up for everything from steak dinners and yakitori to cakes and hot dogs.

Among them were Taylor Inscore and Joseph Stafford, both airmen first class with the 374th Maintenance Squadron who were attending the friendship festival for the first time.

Inscore, 22, of San Antonio, said he wanted to check out the big crowd and see what all the fuss was about.

"It looks fun. If it quit raining a little bit, it would be nicer," he added.

The festival&#8217;s first day also was marked by live entertainment on indoor and outdoor stages, and dozens of vendor booths featuring games, food and concessions. It ended with a fireworks show over the Yokota runway.