Raids in Iraq often come up empty,but are never short on danger 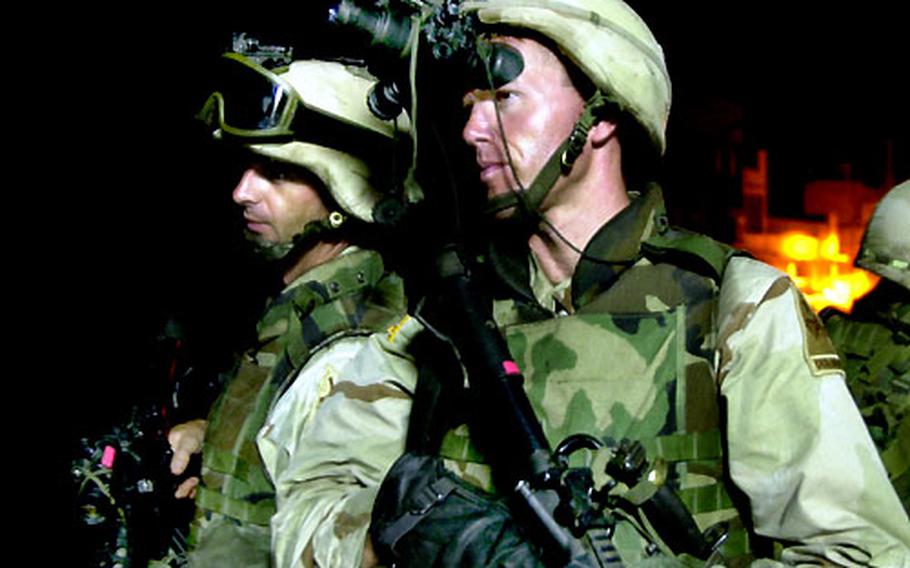 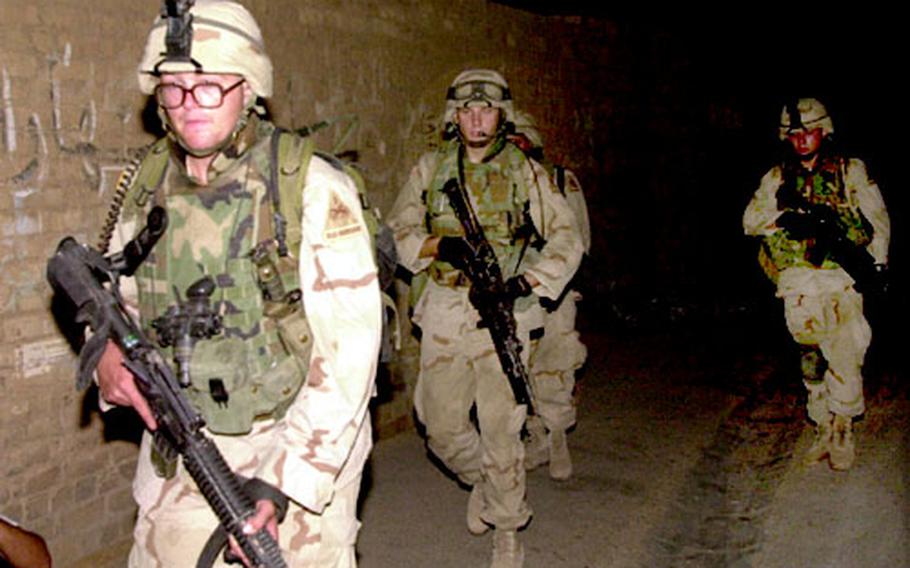 Soldiers from the 3rd Field Artillery unit walk down a Baghdad alley during a raid. (Scott Schonauer / S&S) 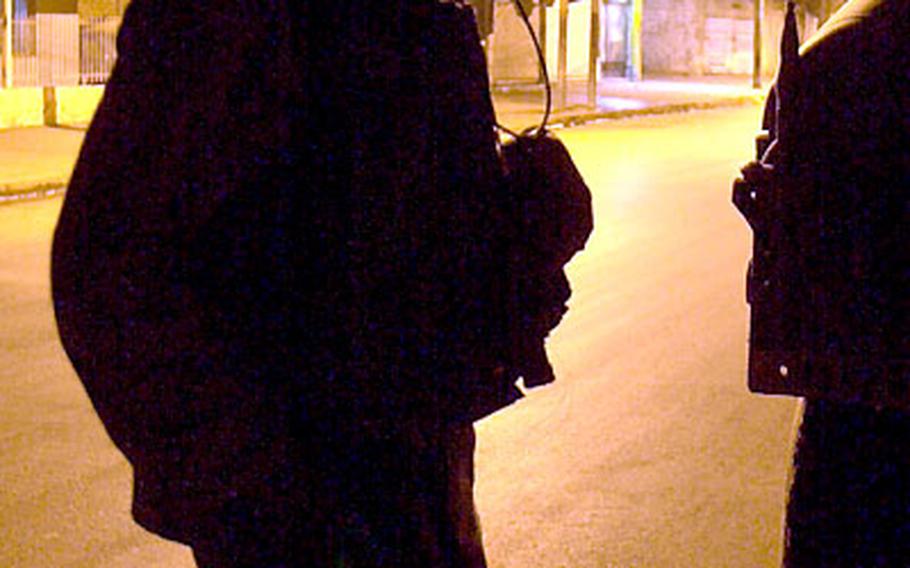 A soldier from the 1st Armored Division&#39;s 1st Brigade, 2nd Battalion walks the streets of Baghdad during a recent raid. (Scott Schonauer / S&S)

BAGHDAD, Iraq &#8212; It&#8217;s after midnight and many of the soldiers Velcro-wrapped in their bulky body armor are already dripping with sweat.

Rolling in Humvees with lights dimmed, they travel to the next house, smash open the door and yank an Iraqi doctor in his underwear out of bed.

They also bring out his two brothers and their sons.

The soldiers think the doctor is one of three men financing attacks against American troops. His name is similar to what an informant gave them. But the troops know they can never be sure on these smash-and-grab raids.

Hours later, after some questioning, they let him go. They got the wrong guy.

While U.S. forces continue to receive hundreds of tips about the whereabouts of former Iraqi leader Saddam Hussein and his shadowy supporters, much of the information troops receive is bogus. In the past two weeks, parts of the 150,000 U.S. forces in Iraq have conducted between 18 and 58 raids a day.

Although some of the intelligence information from Iraqis has led to large weapons caches and Saddam&#8217;s sons Udai and Qusai, sifting through what is credible and what is worthless is a daily challenge for coalition forces.

Outside many of the U.S. bases in Iraq, informants line up willing to dish out information. More times than not, their motivation is not to help rid their neighborhood of bad guys. Some come forward for money. Others offer wrong information to get back at their neighborhood enemy or rival.

Capt. Jeff Hall, commander of a platoon attached to the 3rd Brigade, 1st Armored Division, said dozens of people come up to the palace grounds his unit calls home in Baghdad and offer information. Much of it, he said, is worthless.

Following a trail of lies is frustrating for soldiers who risk their lives traveling at night on Baghdad&#8217;s mean streets. Each day, coalition forces face an average of 12 attacks, from small-arms fire to rocket-propelled grenades.

On many of the raids, the tension is palpable.

With their cheeks often stuffed with a pinch of snuff, they scan rooftops and alleys for anyone hoping to get a lucky shot at a convoy. Riding down the streets after midnight is a little like traveling down a rough ghetto on the bad side of town. The only locals on the street are stray cats, mutts sniffing through trash and criminals starting their shift.

During the Aug. 3 raid, soldiers crammed into Humvees with their rifles locked and loaded.

The targets for the early-morning operation: three Iraqis suspected of attacking the local police station. At the first house, they would get their first scare.

While one team kicked the door open, the familiar sound of a rocket-propelled grenade whistled through the moonlight sky. It was launched only about 200 yards away.

The glow of the explosion lit up the sky above the rooftops. It landed on the other side of the Tigris River, but it was close enough for soldiers to look for safer spots.

For about 10 seconds, they waited, looking for an attacker to leap from around the corner or pop up from a rooftop. With the electricity out, it was almost like walking blindfolded.

Some soldiers, who often carry more than 60 pounds of gear, breathe as though they had just trekked up a mountain in a full sprint.

After clearing the rooms of the house and searching for anyone inside, they determined the house was empty. Soldiers speculated that it was probably the wrong house. They had been sent on another wild-goose chase.

Soldiers from the 82nd Airborne feel their frustration.

Many times they gear up for a raid, leave pumped up about the possibility of nabbing a regime loyalist, only to return disappointed. After dozens of raids, some servicemembers have grown pessimistic about the nightly sweeps.

Many feel used by Iraqis seeking reprisals. If someone in the neighborhood has rubbed an Iraqi the wrong way, they sometimes will try to convince U.S. soldiers that he is a Baath Party loyalist or has a closet full of illegal weapons.

The lies and manipulation only make soldiers more skeptical whenever an informant comes forward with information.

&#8220;A lot of them got a neighbor and they have a grudge against him and they use us to get back at him,&#8221; said Capt. David Elsen, battalion intelligence officer.

The 82nd Airborne has tried to weed through the good and bad information. While the Army is offering money for tips, they do not pay informants unless they suspect they have caught an actual bad guy.

Soldiers often have informants to take them to the target&#8217;s house so they have a good address. The battalion also requires tipsters to sign a paper noting in writing that the information they are giving is truthful and that, if it is not, they are subject to arrest. Those dishing out false information sometimes change their story or come down with a bout of amnesia.

In a change of strategy, the Army has abandoned the blitzkrieg of sweeps for more surgical strikes on regime loyalists. The hope is that they will catch the high-level anti-coalition fighters while reducing the number of raids on innocent Iraqi homes.

Most troops said they are aware that going into an Iraqi&#8217;s home is a major intrusion, but they have to do it for their safety and to create better security nationwide. If they enter the wrong home or pick up the wrong guy, many soldiers apologize to the homeowner through translators.

But until the information improves or honest Iraqis are willing to come forward, soldiers who have gone on countless raids said expectations would remain low. If commanders tell them to go get somebody, they&#8217;ll do their best to try and get the man they want.

Many soldiers, however, are just happy to come back safely.