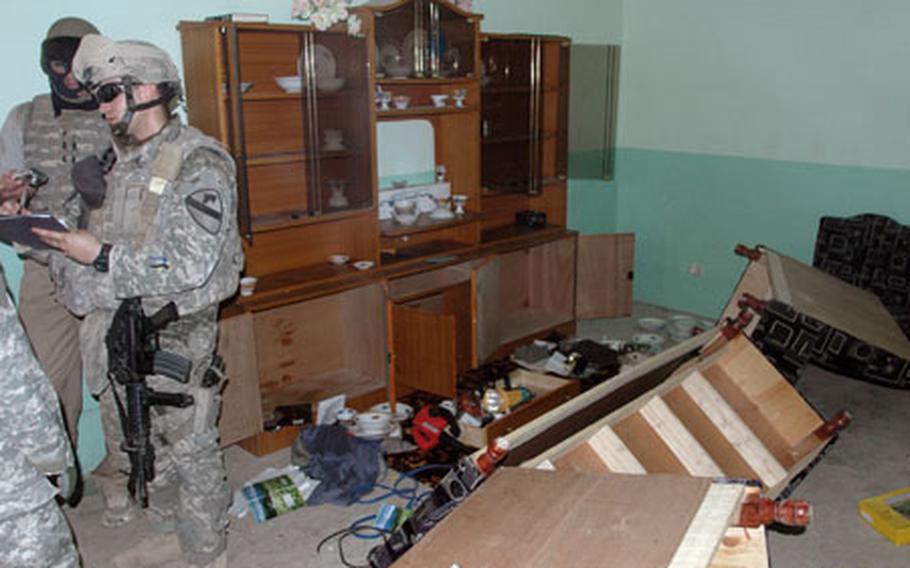 Second Lt. Seth Enterline inspects the living room in a house belonging to an Iraqi civilian after U.S. special operations and Iraqi forces raided it and two other nearby houses. Enterline talked to members of the household and the neighborhood sheikh, who helped to mediate the situation. (Les Neuhaus / S&S)

Second Lt. Seth Enterline inspects the living room in a house belonging to an Iraqi civilian after U.S. special operations and Iraqi forces raided it and two other nearby houses. Enterline talked to members of the household and the neighborhood sheikh, who helped to mediate the situation. (Les Neuhaus / S&S) 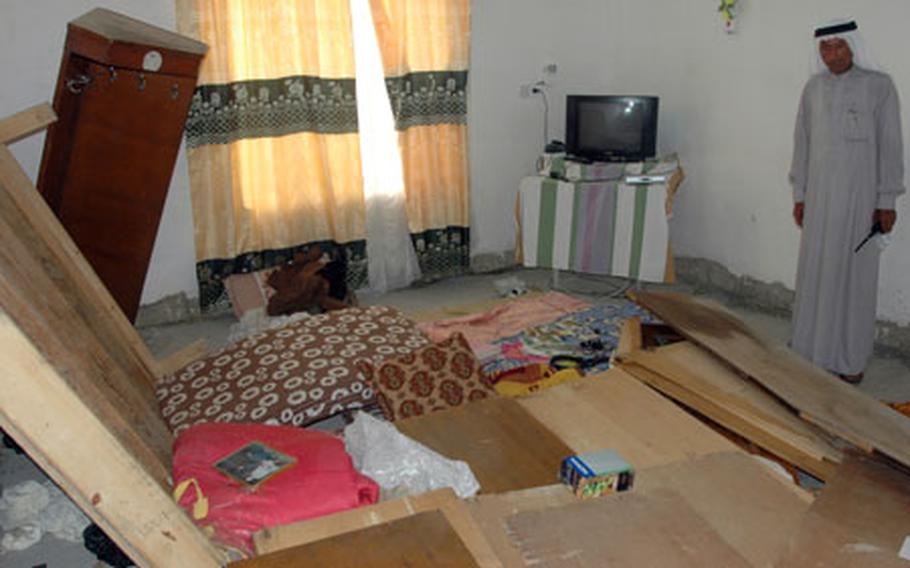 Sheikh Mahmooud Tabor, a community leader in central al Qayyarah, surveys damage incurred Sunday during a U.S. special operations and Iraqi forces raid. In the process of netting several key arrests, including an Iraqi policeman, the forces ransacked the houses and caused significant damage to civilian property. The incident upset many members of the area. U.S. troops are investigating the damage and assured residents there would be financial reimbursement. (Les Neuhaus / S&S)

Members of the 5th Battalion, 82nd Field Artillery Regiment, 4th Brigade, 1st Cavalry Division were called to investigate the situation in their area of operation late Sunday after residents lodged complaints with the Army.

The last thing the troops want is resentful Iraqis who were supporters of their presence before the incident, officials said.

U.S. forces walk a tightrope of acceptance in the area and don&#8217;t want to lose the cooperation and trust of locals.

Though none of the regiment&#8217;s members were involved in the predawn assault that began at an Iraqi policeman&#8217;s house, they were nonetheless called in to quell an unhappy neighborhood in central Qayyarah, a condensed quarter housing nearly 7,000 people.

According to a U.S. military news release issued Tuesday, the raid &#8220;captured the alleged emir of Qayyarah for al-Qaida during an intelligence-driven operation July 15 in Qayyarah.&#8221;

&#8220;During the operation, Iraqi Army and coalition forces also detained three other individuals at the residence and recovered terrorist propoganda, passports and Korean currency.&#8221;

By Sunday afternoon, neighbors thronged the streets to catch a glimpse of the investigation, as a fleet of U.S. military and Iraqi police vehicles came to the scene.

Al Qayyarah itself is a small and dusty hamlet of 22,000 people, roughly 190 miles north of Baghdad.

The raid was launched after a tip that insurgents were congregating at the house of a corrupt Iraqi police official, a military official said. When the investigating troops arrived later Sunday, they found broken windows, furniture smashed to tinder, and desk and bedroom drawers strewn about.

Wooden closets were collapsed, having been pushed over and trampled. Family pictures in glass frames lay on the floor, broken to pieces.

The sheikh has kept good company with the regiment, as diplomacy in this area of town is often bridged through him.

The Americans rely upon him to get into the neighborhood safely. Sheikhs often play the role of neighborhood mayor or ambassador, mediating problems.

Tabor said he likes the U.S. troops, but he wasn&#8217;t pleased with the apparent results of the raid.

One house&#8217;s kitchen looked like an earthquake had struck. The matriarch of the family &#8212; a grandmother named Fatha Salma Ibrahim &#8212; wept as the investigative team took pictures and itemized the damage.

&#8220;Why? Why did they come and do this?&#8221; she pleaded to an interpreter and the sheikh. Other women and young girls huddled outside of the house, crying while the team investigated.

Iraqi police have been accused of improper behavior in the past in the same neighborhood, the sheikh said. The arrests Sunday included a police official accused of corruption and abetting insurgents. An AK-47 assault rifle and pistol were confiscated from his home, officials said.

The U.S. military held a meeting with central al Qayyarah officials on Monday to prepare a reimbursement payment strategy for damages to property, Army officials said.