RAF’s B Flight always ready for the worst 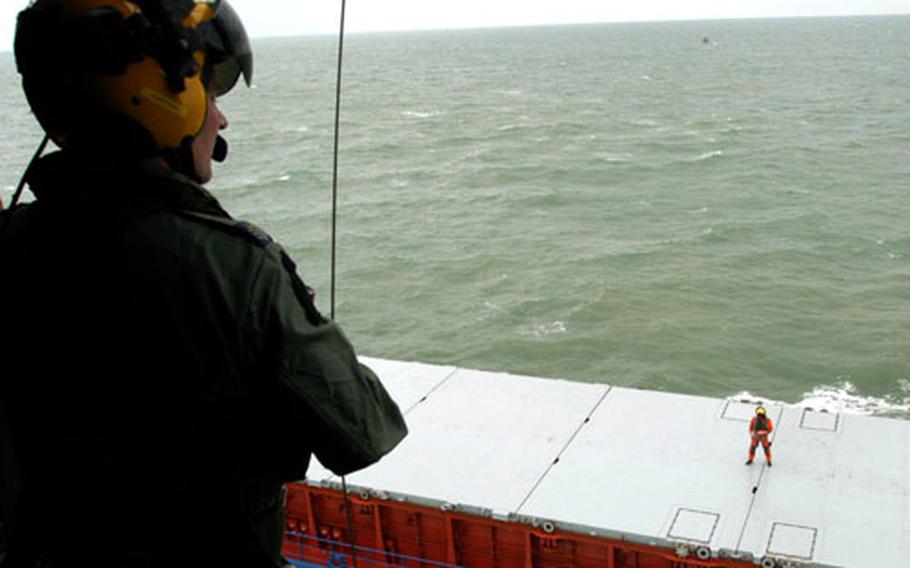 Royal Air Force Sgt. Lee Clark waits on the deck of a freighter in the North Sea for his partner, foreground, Flight Sgt. Dave Sheppard, to lift him into the helicopter during a recent training exercise. (Bryan Mitchell / S&S) Sgt. Lee Clark is lowered from the helicopter onto a freighter. (Bryan Mitchell / S&S) 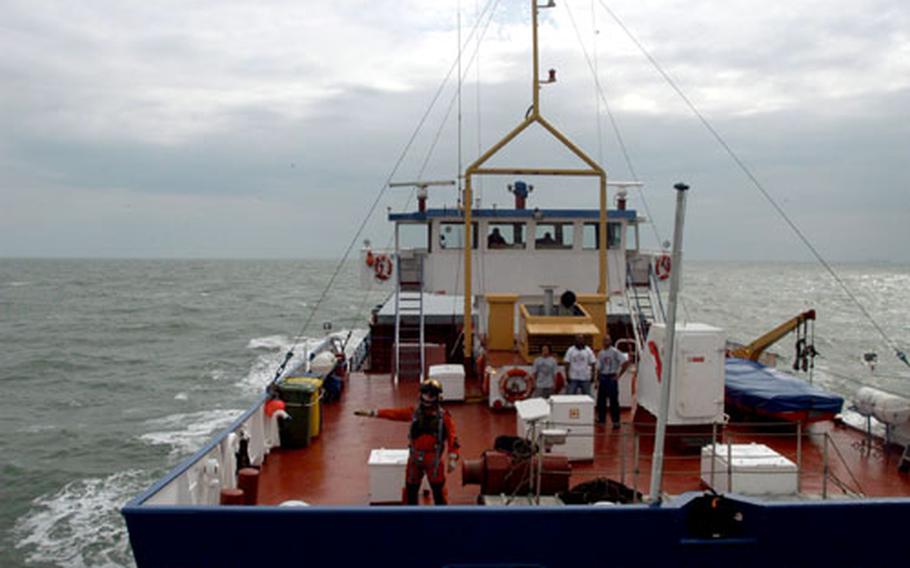 Sgt. Lee Clark directs the helicopter as it drops a training participant onto the deck of the freighter. (Bryan Mitchell / S&S)

RAF WATTISHAM &#8212; When the sky falls dark or the weather turns violent, victims in peril across Britain turn to the Royal Air Force&#8217;s search-and-rescue squads for help.

Whether stranded on a wayward ship dozens of miles from shore or crushed by the twisted wreckage of a midnight car accident, ordinary people in extraordinary circumstances find relief in the swooshing sound of the unit&#8217;s Sea King rescue helicopter.

In the East of England, victim-searching and life-saving falls on the shoulders of the men and women at this southern Suffolk RAF installation, home to the B Flight, 22nd Squadron.

Murkin is one of the lead pilots at the B Flight&#8217;s command post, a nondescript building on the edge of this military post that functions more like a fire station than a traditional Royal Air Force unit.

Pilots, engineers and rescue technicians pass the shifts, which often last 36 hours, by watching television, reading magazines and cooking meals for the group. Airmen can sleep on beds and there&#8217;s a full locker room.

During the day, the team has 15 minutes from the time an emergency call arrives to go airborne for the search or rescue. At night, the team must jump from sleep and put the chopper in the air within 45 minutes.

When the unit is not being called on sudden missions, it spends up to 4&#189; hours per day training. That can mean anything from deploying the helicopter&#8217;s emergency raft in the unit&#8217;s indoor training pool to spending an afternoon hovering 100 feet above commercial vessels in the North Sea.

Members of the unit, including U.S. Coast Guard Lt. Tyson Weinert, part of a U.S.-U.K. military exchange program, regularly engage with fishing boats, freighters and ferries to maximize the reality of the training.

&#8220;Any vessel transiting through U.K. waters is a potential training platform, as long as the captain is happy to train with us,&#8221; Weinert explained of the British &#8220;Opportunity Decks&#8221; system. &#8220;The vessel can maintain its course and speed and we take care of the rest. It provides an infinite experience base to draw upon.&#8221;

&#8220;Most of them realize we could be out there tomorrow pulling one of their guys off that ship,&#8221; Murkin said. &#8220;People on the water understand the risks are great and that really breeds a sense of camaraderie.&#8221;

During a recent training mission, Flight Sgt. Dave Sheppard lowered Sgt. Lee Clark onto the stern of a Panamanian freighter moving at roughly 20 knots through the choppy North Sea and then safely lifted him back into the chopper, hovering roughly 100 feet above the ship.

The team moved on to a more challenging vessel where Sheppard masterfully lowered his teammate onto the back of a Dutch fishing boat while simultaneously controlling the flight of the aircraft.

A simple joystick position near the wench operator allows the pilot to set the helicopter on cruise control in terms of speed and altitude and have the rear member of crew control the course of the aircraft.

While the units were designed to rescue downed RAF pilots, the truth is the squadron spends far more time over land and water rescuing motorists from gnarly car accidents or sailors from troubled seas.