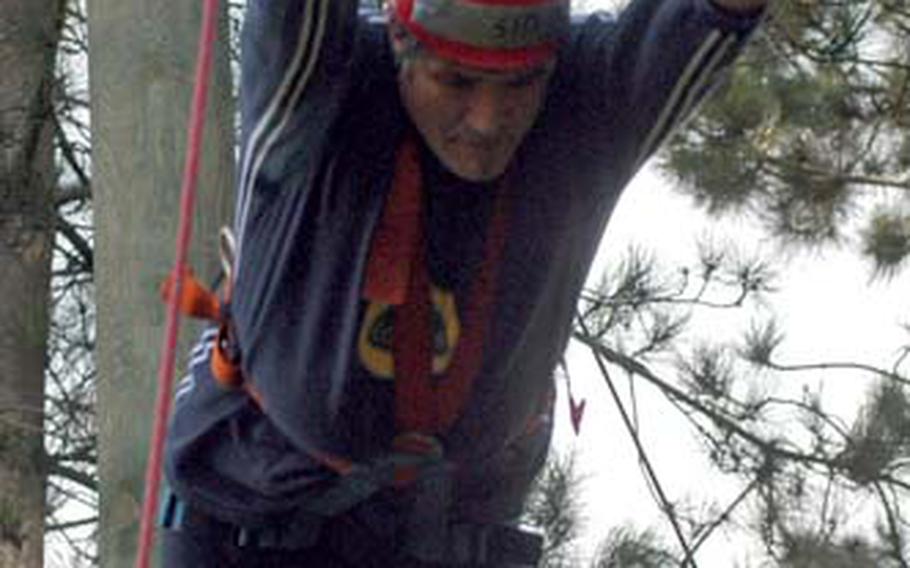 Sid Boardman, a civilian employee of Stars and Stripes at RAF Mildenhall, makes the "leap of faith" on the ropes course at the base. (Charlie Reed / S&S)

RAF MILDENHALL &mdash; When you&rsquo;re standing 30 feet in the air, on top of a telephone pole that&rsquo;s swaying ever so slightly in the breeze, jumping off seems ridiculous &mdash; the last thing any sensible human being should do.

But when the alternative is climbing back down the rickety metal ladder that got you up there in the first place, there&rsquo;s not much room for choice. It&rsquo;s do or die.

Your heart is racing and your hands are shaky as you take the plunge.

You&rsquo;ve just completed the leap of faith, one of the most challenging obstacles at the base&rsquo;s ropes course.

A combination of relief, pride and excitement electrifies the senses once you&rsquo;re back on the ground. But capturing that exhilarating feeling means you have to disregard the instinct urging you not to jump.

The reluctance is just a bit of self-preservation, said Wainright, who leads groups around the series of utility poles and wooden planks strung together by a lot of sturdy wiring.

Whether it&rsquo;s a crowd of students, airmen or office workers, everyone starts the ropes course on the ground with a safety briefing and several trust-building exercises.

"It&rsquo;s safer than riding on a airplane," insists Wainwright, as he checks and rechecks the harnesses, carabiners and knotted ropes that separate you from death, or at least serious injury.

"It&rsquo;s all about trust," he said. "Trusting that you&rsquo;re not going to die when you jump."

Groups work their way up to the course&rsquo;s bigger challenges from ground exercises, such as the trust fall, where one person folds his arms across his chest and falls backward into the arms of a partner. Problem-solving exercises also test a group&rsquo;s ability to get members in, out and around obstacles.

After that, it&rsquo;s on to the high-flying fun. From a tight-rope walk to a rappelling wall, to a zip cord, the course is a little daunting, but far from impossible, Wainwright said.

"Once you get up there, you just have to commit to it and do it," he said.

Therapists began using the courses to help treat psychiatric patients and at-risk youth in the 1970s.

By the &rsquo;90s, the courses entered the mainstream and started being used by everyone from the military to corporations for team-building and group development, according to research from North Carolina State University.

Believe it or not, completing a ropes course with your work mates brings you closer together, if not just for the afternoon. It&rsquo;s also a great way to conquer a fear of heights, train for a mountain-climbing excursion or just get some exercise.

The sense of personal accomplishment is another reason to check out a ropes course, available at most bases in the U.K. Rates vary depending on the size of the group and duration of the course, though Air Force units can use the courses any time for free. Contact your local Outdoor Recreation for details.

Go ahead, make the leap.