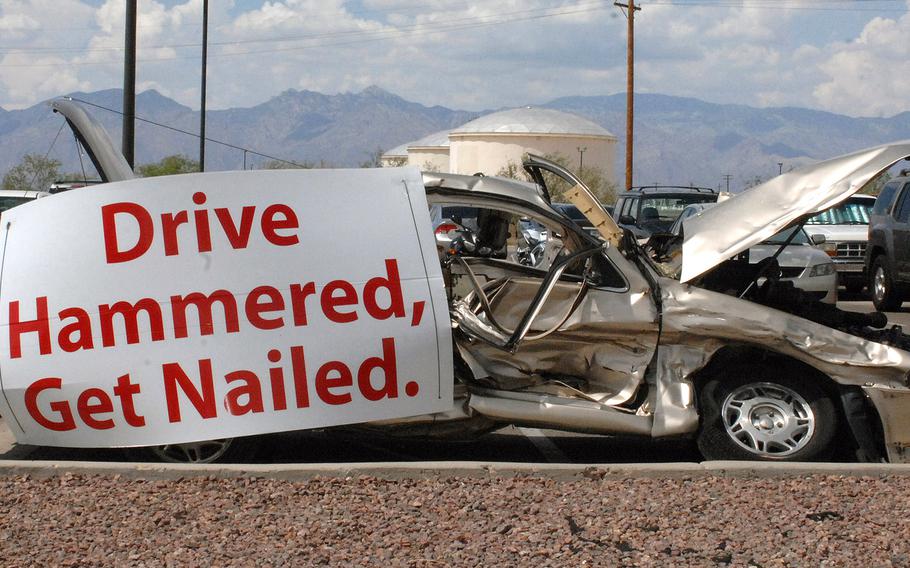 At an Air Force base in Arizona, one squadron's campaign to bring awareness to the effects of drunk driving features a smashed up car with a sign declaring if you "drive hammered,' you'll "get nailed." At RAF Mildenhall, the base is fighting what one official called a “very disturbing” surge in drinking-and-driving incidents. (Betty Chevalier/U.S. Air Force)

At an Air Force base in Arizona, one squadron's campaign to bring awareness to the effects of drunk driving features a smashed up car with a sign declaring if you "drive hammered,' you'll "get nailed." At RAF Mildenhall, the base is fighting what one official called a “very disturbing” surge in drinking-and-driving incidents. (Betty Chevalier/U.S. Air Force) 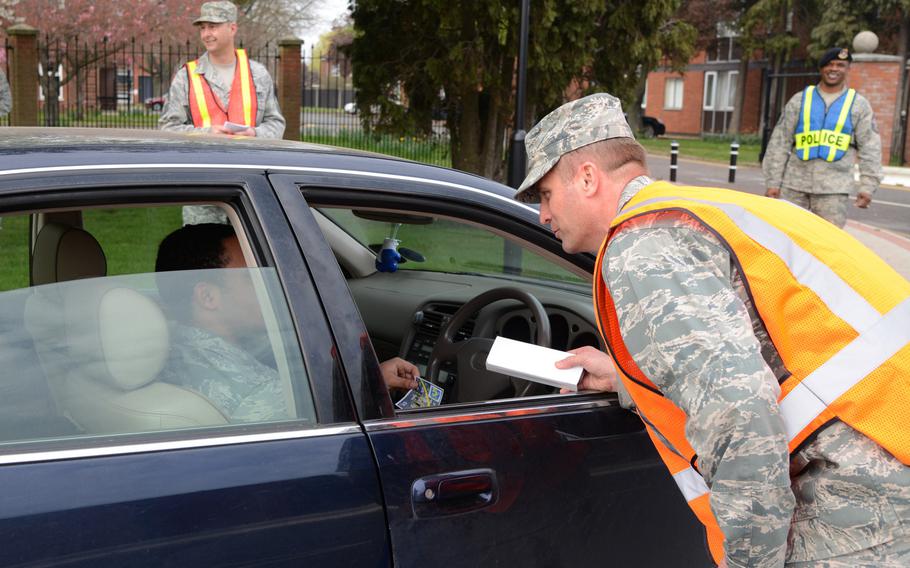 Col. David Cox, 100th Air Refueling Wing vice commander, passed out information about safe driving to personnel leaving the base on Thursday, April 3, 2014, before the start of a three-day weekend. Someone from the base was charged with driving under the influence two days later. (Kelsey Waters/U.S. Air Force) 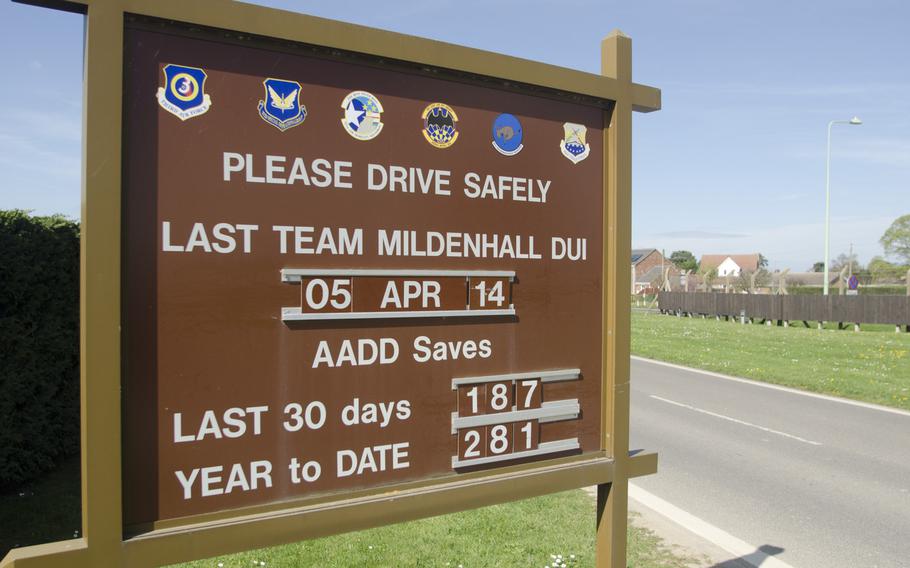 RAF Mildenhall, England, uses a board to tell the base community when someone has been caught driving under the influence. The base is planning more traffic-safety education events. (Adam L. Mathis/Stars and Stripes)

As of April 5, the base had six DUIs FOR 2014, five of which happened since Feb. 16, a base official said. The number puts the base ahead of two of its neighbors: RAF Lakenheath has five, and RAF Alconbury, a smaller base than both Lakenheath and Mildenhall, has no DUIs so far this year.

Col. David Cox, vice commander of the 100th Air Refueling Wing at Mildenhall, said the DUIs had resulted in some minor injuries. Last year, however, Staff Sgt. Anderson Johnson died in a single-car crash while driving with a blood-alcohol level more than twice the legal limit.

“Any DUI is unacceptable, and six since the middle of February is very disturbing,” Cox said. “That’s why we are continuing to be very active in our message.”

The rash of DUIs coincides with a dramatic increase in the use of a shuttle service for those who do not want to drive after they’ve been drinking. The service is run by Airmen Against Drunk Driving, and signs on base promoting the service indicate the organization has transported 187 people in the past 30 days, more than half of its 281 total for the year so far.

Officials did not have any explanation for the surge in DUIs or in the use of the shuttle service, but Cox said he looked at data back to 2008 and saw that DUIs can be sporadic. Mildenhall had between nine and 18 DUIs a year during that period.

“I would say we’re a little bit ahead of what statistically we should be, but we’re not ahead of a high of 18,” Cox said.

To combat reckless driving, the base is using an Air Force traffic safety initiative. The 5-2 Drive campaign focuses on five dangers: speeding, drinking and driving, using phones while driving, driving without a seat belt and avoiding distractions.

Lt. Col. Jay Butterfield, Mildenhall’s chief of safety, said officials are “strategically” focusing their safety campaign to improve driving in the summer months, when more accidents occur. They are planning a series of traffic safety events that include small-group discussions led by airmen who have had DUIs and using statistics to create talking points for commanders to encourage airmen to drive safely.

Butterfield said the overall campaign is about “relying on people, relying on leadership, relying on the overarching goodness of humanity to care about other people and assist in their development.”

How effective the campaign will be remains to be seen.

As part of the 5-2 Drive initiative, on April 3 Cox and other leaders from the base handed out information on safe driving to people leaving the base. Two days later a DUI was reported.

In February the base posted on Facebook a message from Cox urging people to continue a streak of more than 120 days without a DUI. The streak ended two days later with the first DUI of the year.

“I’m not naive,” Cox said. Statistically speaking, “if 99 percent of our airmen don’t drink and drive in a given weekend, based upon the base population, that means there’s probably 20 or 30 in a given weekend … doing this. It’s just a matter if they’re going to get caught or not.”

“So I think the better question is not how do we measure our success based upon saying something like 120 days without a DUI and then you get one … my question is, ‘What would the number have been had we not said anything?’ And that’s the number we can’t address.”

Five of Mildenhall’s DUIs occurred off base, which makes the base a significant factor in DUIs for the local area. Suffolk County, which according to the most recent diversity profile, has more than 732,000 residents, has had 24 people fail a breath analysis or refuse to submit to an analysis this year, a Suffolk Constabulary official said in a Thursday phone interview.