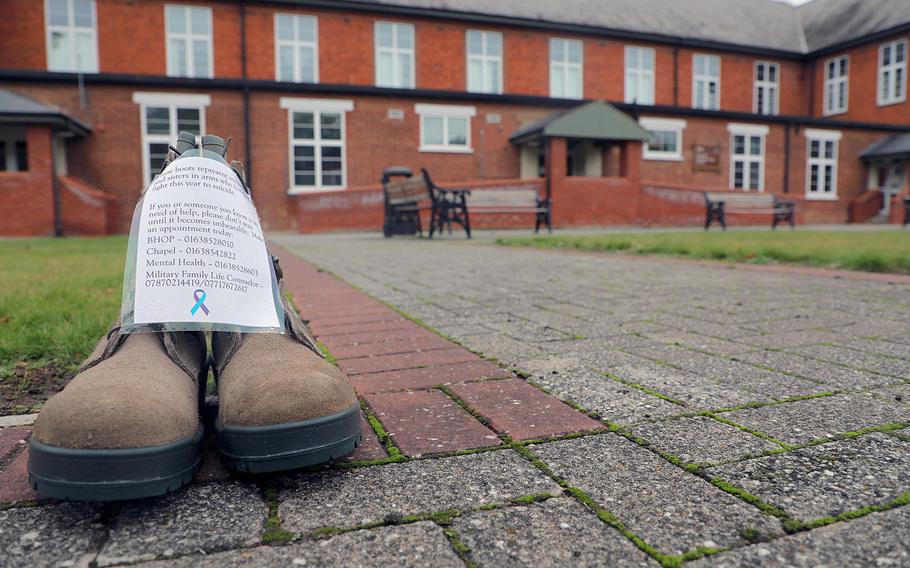 More than 70 pairs of boots are laid out on Oct. 4, 2019 on the walkway leading to the dining hall at RAF Mildenhall, to symbolize the airmen who died by suicide this year. The display is part of an airmen-run program to reduce mental health-related stigma and convince troubled airmen to seek assistance. (Christopher Dennis/Stars and Stripes)

More than 70 pairs of boots are laid out on Oct. 4, 2019 on the walkway leading to the dining hall at RAF Mildenhall, to symbolize the airmen who died by suicide this year. The display is part of an airmen-run program to reduce mental health-related stigma and convince troubled airmen to seek assistance. (Christopher Dennis/Stars and Stripes) 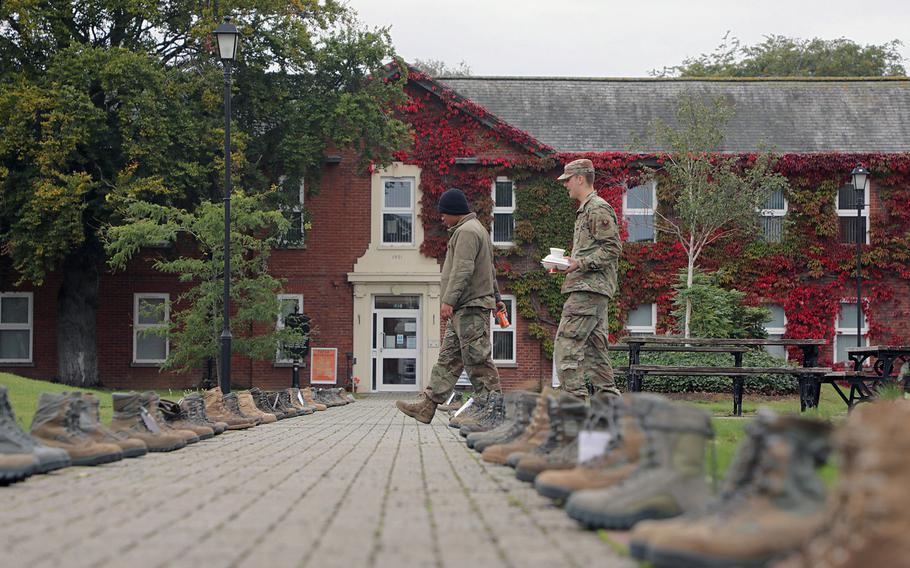 Airmen 1st Class Dylan Alfafara, left, and Nicholas Rose walk past more than 70 pairs of boots laid out by Operation YOU on RAF Mildenhall, to symbolize the number of airmen who have died by suicide this year, Oct 4, 2019. (Christopher Dennis/Stars and Stripes)

MILDENHALL, England – More than 70 pairs of boots were placed in a central part of RAF Mildenhall to illustrate the high rate of suicide in the service as part of a a new airmen-run initiative that aims to change opinions about seeking help for mental health issues.

“These boots represent our brothers and sisters in arms who lost their fight this year to suicide,” said laminated signs by the boots, which lined the walkway to the dining facility.

The signs also included a list of help numbers.

The program was the brainchild of 14 NCOs, who “got together to discuss current programs on base, and how we can make everything better, what we’re missing,” said Tech, Sgt. Alicia Van Doren, Operations NCO for 95th Reconnaissance Squadron.

They came up with the what they called Operation YOU, a 90-day program that was announced last month at the 100th Air Refueling Wing stand-down to address the soaring suicide rate in the Air Force.

Operation YOU’s goal is to have servicemembers take the lead in helping troubled individuals to seek help and ending any stigma felt by those who reach out for assistance.

It includes two initiatives – a mental health day, where airmen can ask their supervisor for a day off to allow them to see a professional, said Van Doren, and a liaison in each unit, who checks on the well-being of unit members at least once a month.

“With the liaison portion, that is where we have a lot of airmen signed up,” said Van Doren. “Once they get trained, they will be someone in that unit that anyone can talk with, airman to airman.”

To judge if the program is achieving its goals, organizers will talk with chaplains and resiliency providers to see if there has been a change in the number of people seeing them, and check reports to see how many airmen have contemplated suicide or even made an attempt to take their own life.

“We’re hoping at the end of the 90 days that the relationships established through the use of liaisons and peer-to-peer connections will continue to grow, and people will know more about the services on base,” said Van Doren.

Air Force Chief of Staff Gen. David Goldfein called this summer on units to stand down for a day to address the soaring number of suicides in the service. At the time, 78 airmen had died by suicide this year, and Air Force officials warned that if airman suicides continue at that pace, this year’s deaths in the service will far eclipse last year’s, when 60 active-duty airmen, 17 Air National Guard and three Air Force reservists died by suicide, for a total of 80 airmen, according to the Defense Suicide Prevention Office.