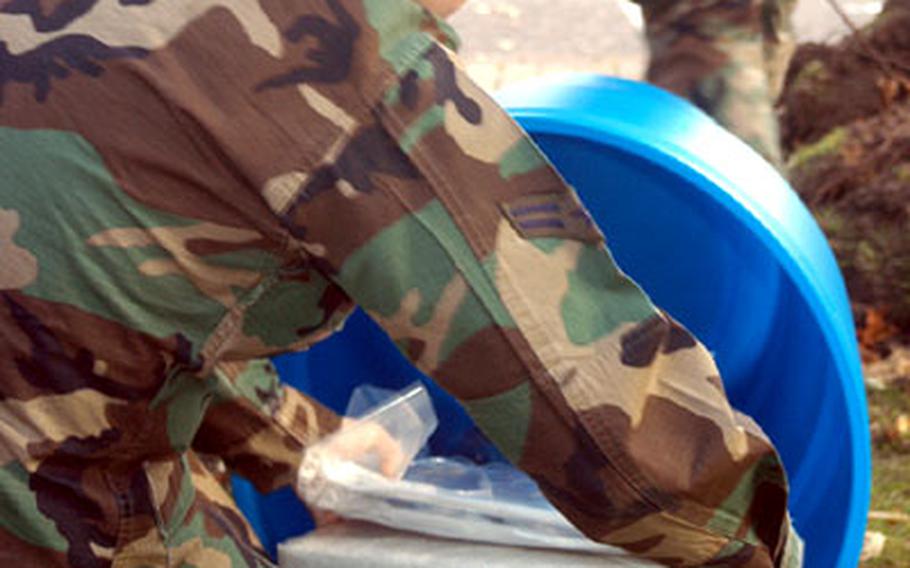 Airman 1st Class Monica Whitmore of the 100th Security Forces Squadron at RAF Mildenhall, England, loads items Thursday into a time capsule. The time capsule was buried on the base as part of a celebration of the base’s 70th anniversary. (Ron Jensen / S&S)

Airman 1st Class Monica Whitmore of the 100th Security Forces Squadron at RAF Mildenhall, England, loads items Thursday into a time capsule. The time capsule was buried on the base as part of a celebration of the base’s 70th anniversary. (Ron Jensen / S&S) 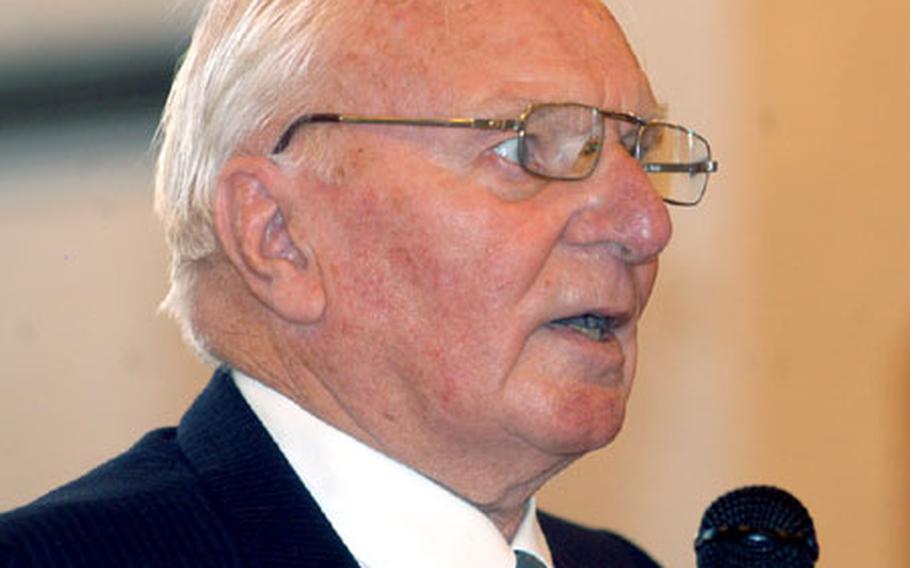 Ron Marshall of Newmarket, England, discusses his time at RAF Mildenhall, England, during World War II. He was part of a panel that recounted personal histories of the base. (Ron Jensen / S&S)

RAF MILDENHALL, England &#8212; Built while the winds of war were blowing on the continent, RAF Mildenhall is celebrating seven decades of history this week, from a time when the enemy was led by a man named Adolf Hitler to the present, when Osama bin Laden is the chief culprit&#8217;s name.

A time capsule containing uniforms, current newspapers and a scrapbook holding squadron patches, coins and other memorabilia was buried after a panel of visitors who once called the base home recounted their experiences at what is now home of the 100th Air Refueling Wing.

Built in the shadow of the growing concerns regarding Nazi Germany, the base opened in 1934 and was ready for war when war finally came. Within hours of the Parliament&#8217;s declaration of war in 1939, bombers lifted off from the grass airfield to carry the fight across the Channel.

Watching much of that from the ground was Ron Marshall of Newmarket, England. He was an electrician in the Royal Air Force and charged with providing pilots a beacon signal that guided them to and from their combat missions.

Now in his 80s, Marshall recalled sitting on a hilltop nine miles from base and broadcasting the beacon that was a lifeline for pilots.

Even 60 years later, he said, he can recall cooking steaks on his hilltop outpost.

Roy Pearson recalled serving as an air traffic controller in the 1950s, worrying a bit, he said, over the Americans who insisted on carrying weapons with them. That wasn&#8217;t done in the RAF.

Mike Braband, a Chicago native, arrived at the base in 1962 as an aircraft structural repair specialist. His time at the base was enjoyable, he said, despite the monthly pay of $121.

Times were tense in 1986, said Al Garza, when American planes flying from England bombed Libya in retaliation for an attack on U.S. servicemembers in Germany. Likening the atmosphere to today&#8217;s tense time, he said some airmen wondered if they were safe living off base.

The time capsule was buried near the base&#8217;s officers club known as Middleton Hall, one of the first buildings constructed on the base. It will remain buried for 30 years, until 2034, the 100th anniversary of the base.

In remarks before the capsule was buried, Devereaux said the base&#8217;s history is worth recalling and he thanked the visitors who spoke about the past.