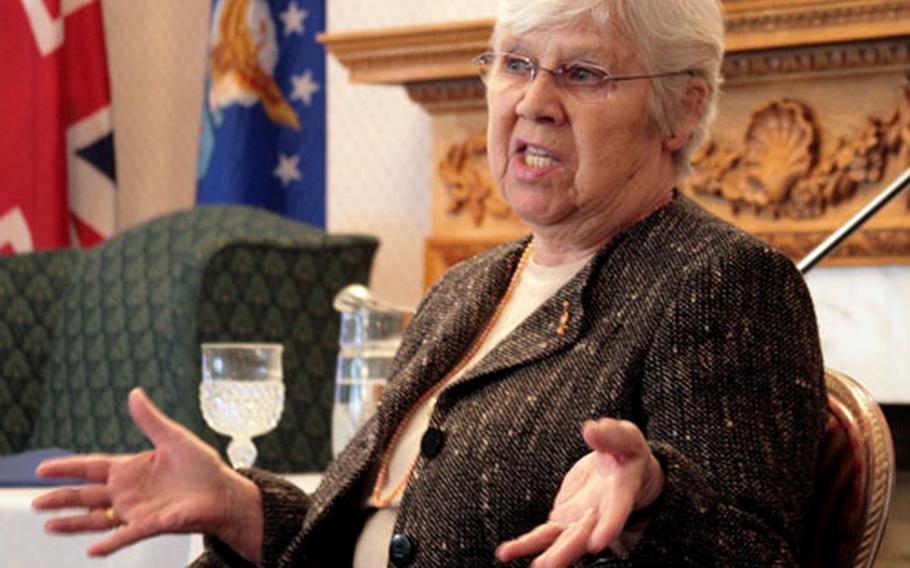 Janina Fischler-Martinho, a Holocaust survivor, speaks to a crowd at RAF Mildenhall about her experiences before, during and after World War II. (Charlie Reed / S&S)

RAF MILDENHALL &#8212; Janina Fischler-Martinho recounts the horrors of the Holocaust with emotion and detail that seem fresh even nearly 70 years later.

Fischler-Martinho, a native of Krak&#243;w, Poland, who now lives in London, came to RAF Mildenhall to recount her story as part of last week&#8217;s Holocaust remembrance events sponsored by the 100th Air Refueling Wing and the 48th Fighter Wing.

Her account detailed her family&#8217;s move into a Jewish ghetto after Germany invaded Poland in 1939. When German SS troops began forcing the ghetto&#8217;s population into concentration camps, Fischler-Martinho and her older brother, Joseph, escaped the first round of "resettlement." When German soldiers returned the next year, she and her brother fled the ghetto but soon parted ways.

She managed to survive on the outside, barely a teenager. Joseph ended up in a concentration camp but also survived. He was on the verge of death when American forces liberated the Mauthausen camp in 1945.

"The American soldiers fed him like one feeds a baby. You see, their stomachs couldn&#8217;t handle food straight away," she said. "The Americans have played a considerable role in our lives."

It was during these times that her entire extended and immediate family was killed, save Joseph, with whom she reunited after the war. The two made their way into various western European countries and eventually settled in the United Kingdom. Since her brother died a few years ago, Fischler-Martinho, now 79, has pondered her story of survival even more.

"Why I should have been chosen to live and tell the story, I am not sure," she told a room full of airmen who gathered to hear her speak Wednesday at the Middleton Hall.

Her book, "Have You Seen My Sister?," tells the story in more detail, though her hourlong talk seemed to drive home the poignancy of her narrative more than words on a page.

"She was reliving it right then and there for us and that&#8217;s what I think enriched us," said Master Sgt. Anthony Weiss, who coordinated the event. "Hearing that eyewitness account like it just happened yesterday was so moving. It&#8217;s something you can&#8217;t get from reading about it."

Weiss, a member of the 352 Special Operations Group, found Fischler-Martinho through the London Jewish Cultural Centre.

"Especially living overseas here, we are so close to the events that happened," he said. "It&#8217;s important for us to be able to keep those memories alive and pay tribute. It&#8217;s something we won&#8217;t have the opportunity to do 10 years down the road."